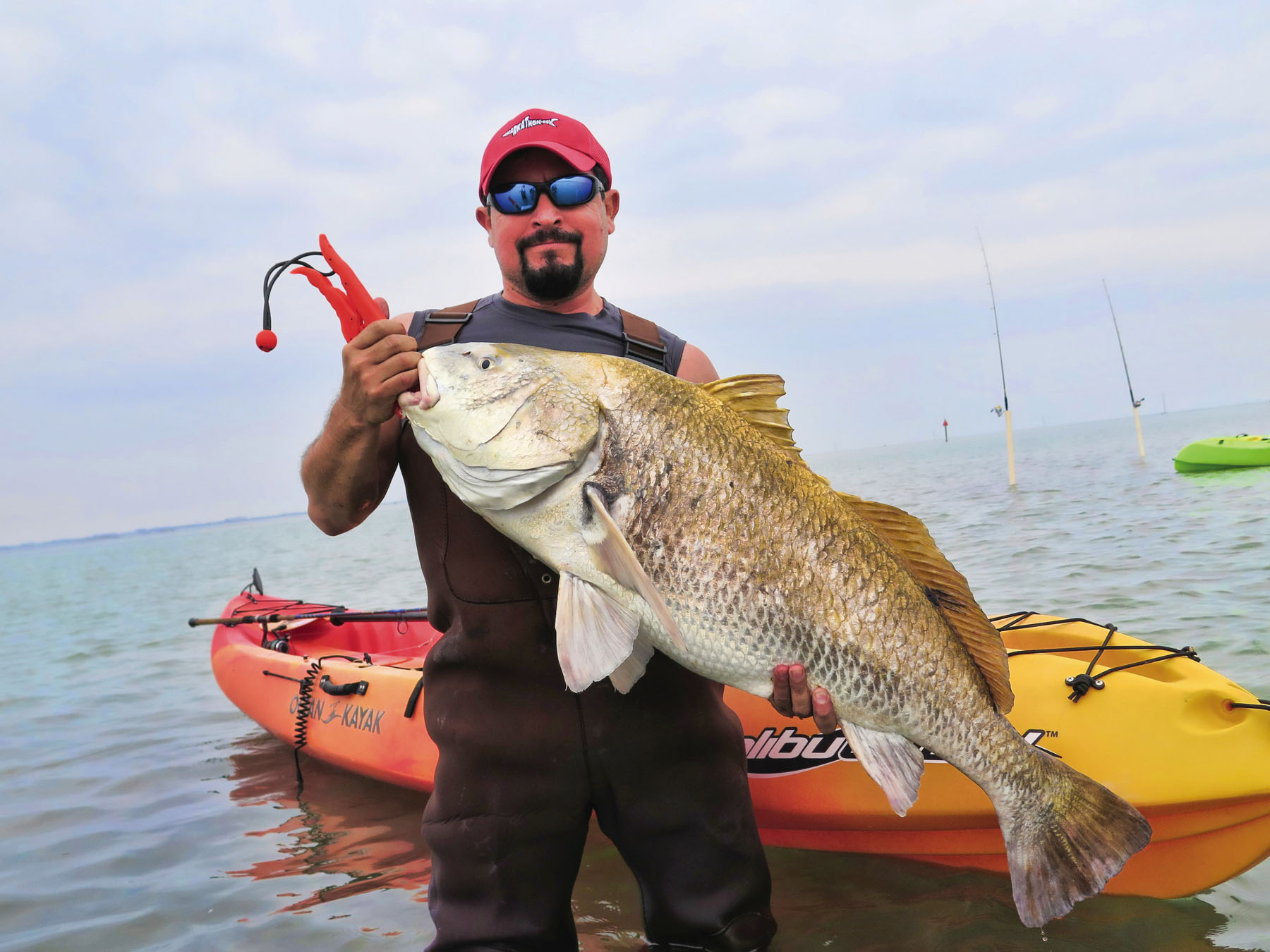 Evolution has shown that you do not need to be the fastest, prettiest, or most graceful of species in order to thrive on our planet. In accordance, the black drum (Pogonias cromis) qualifies as a poster child for this statement. Oversized, mature fish often resemble a prehistoric creature, one that appears almost misplaced in time. Anyone who has ever confronted and been slimed by a "Big Ugly" knows that these are certainly an odd and interesting species. Their brute size and strength, coupled with less than menacing appearance, makes them an angling target for people of all ages and angling skill. Fortunately, their annual reproductive patterns have remained unchanged throughout modern natural history and are easily predictable. Despite regulations requiring the release of these oversized fish, the multitude of anglers seeking the thrill of tangling with our bay's largest fish grows yearly.

Each spring, the large and mature black drum inhabit the inshore waters and bays to spawn. It is a system of nature that happens on cue, like clockwork. They seek the deep water coastal channels and wind up in an array of inshore locations. They are called "drum" because these fish are able to produce very loud low-frequency drumming sounds which resonate within their air bladder. When black drum are schooled during spawning you can often hear the drumming vibrations permeating the hull of the kayak or boat. It is an eerie feeling to be in the kayak and hear ghostly war drums, as though an all out battle is about to ensue. However, in truth and on many occasions, a battle doesn't tend to take place at all! Any lack of beauty is overridden by their robust size, and for many casual and novice anglers, this will be their very best shot at landing a 30-40lb fish in their lifetime.

While I thoroughly enjoy the mystique of fishing for these in the midnight hours, the daylight brings it's advantages. I would like to discuss the aspect of pursuing drum in the middle of the day. Being a kayak enthusiast, I love to fish exclusively from the yak when it comes to targeting many species, including drum. Kayaks present a much more affordable option than filling up a boat with gas, all the while maintaining a stealth-like approach in general. In addition, all fish caught and landed from the yak go towards my points in the Kayak Wars World Fishing Tournament. Anywhere or any time you can reach prime drum locations you can set up shop in the shallows and then wade out, casting baits into deeper water, if you prefer. For this particular "Oz Drum Method", your main equipment will include a kayak, stakeout pole to tie off to, appropriate tackle, and essential safety gear.

Once your checklist is complete, it is time to choose a location. One of the most productive areas to hunt these large slimy critters is in any deepwater channel, hole, or jetty inlet. In south Texas, the Intracoastal Waterway of the Laguna Madre is a personal favorite. When they're in greatest abundance, March and April, you can fish any portion of the ICW and likely get hooked up. I prefer to space out away from others (which can actually be crowded during the peak of the run). Despite the vast boat traffic during the day, it really doesn't seem to affect the bite that much. You want to get to the edge of the channel and anchor your kayak with a stakeout pole very shallow. This will allow you to be in casting range of the fish while being out of the way and avoiding boat traffic. As with any kayak fishing adventure, it is highly recommended that you fish with a partner or group for safety reasons.

Here we go the bait discussion. It is no secret that the oversized black drum are highly addicted to crab and other crustaceans. Drum do not have large razor sharp teeth like many other predators, yet they do have a couple secret weapons. They use their highly sensitive whisker-like barbels to find the crab or other shellfish that may be buried, suck it up and inhale it whole. They then crush it with their impressively strong pharyngeal teeth (specialized teeth at the base of the throat). The pharyngeal teeth even have the power to crush whole oysters, which do constitute as a sizeable portion of the drum's diet. One major problem though, when trying to obtain crab for bait (blue crab especially) is the general lack of availability in this season. During years of cold harsh winters, live blue crab can be virtually nowhere to be found. If the water is too cold, they'll likely still be buried deep in the layered sediment out of reach of commercial fishermen and therefore not for sale in seafood markets or bait camps. Then we must improvise!

While blue crab will undoubtedly be the favorite bait with most anglers, there are alternatives. Mantis shrimp (sea lice) are a great substitute and work well, however don't last long if hardhead catfish and other pesky bait stealers are around. A personal super-secret bait I resort to in the event crab is not available is crawfish (even pre-cooked). Crawfish are a natural forage of the drum, and easily available to them in brackish/fresh water. Remarkably, for whatever reason, drum seem fond of spicy, Cajun-cooked crawfish go figure. You can hook them in the tail similar to the sea lice, and even double stack them for effectiveness. If you were able to obtain blue crab, you can use these one of two ways. If you have plenty, you can use a single whole crab (crush the legs and claws for scent dispersal). You may also flip the crab upside down and cut in half. If the drum are around and bait stealers aren't an issue, this may be the route you wish to take to ensure your bait supply lasts longer.

Typically, the leader setup for big drum is quite simple. Many people go overkill using 100lb mono or heavier with large 14/0 Mustad circle hooks. I prefer a lighter 60lb fluorocarbon trace to a three way swivel with another trace to a weight. In regard to hooks, I tend to favor the much smaller 3/0 Owner Mutu circle hook. After all, if they work for 100+ pound tuna, a black drum is no threat. For the crab, I like to hook the crab at the edge of the carapace near the lateral spine. Another secret tactic is to add a strip of crab-flavored Fishbites to any bait you may be using. Be sure to get the bait out in deep enough water (10-15' depth) but don't perform a powerful hero cast causing your bait to fly off the hook. The ICW drops off fairly fast so a 10- or 15 yard lob should get you in the money. Now, you can place your rod in the kayak rod holder or optional PVC tube stuck in the mud and wait.

Depending on the tide, the drum may be finicky. If this is the case you may have to just duke it out until the bite turns on or relocate after a while. When they do feed, they should be around in good numbers. They will often pick up the bait and slowly run. On semi-light tackle, it doesn't get much better than this for a fight. As long as you have at least 150yds of 30-40lb line (braided recommended but not essential), you should never get spooled.

Oversized drum provide great battles and targeting them is a worthy venture for getting kids on a monster fish. Landing them is easy and a pair of fish grips is a handy tool. If you do land them from the kayak, you should be able to stand in the water where your stakeout pole is deployed and get a fantastic photo. Upon releasing, most swim off with ease. If one by chance turns belly-up, simply force it into the right-side-up position and walk with it until it freely swims off. Landing anything upwards of 40-50lbs in the bay is a ton of fun. Making a photo with an impressive fish is a great way to share your adventure with your family and others.