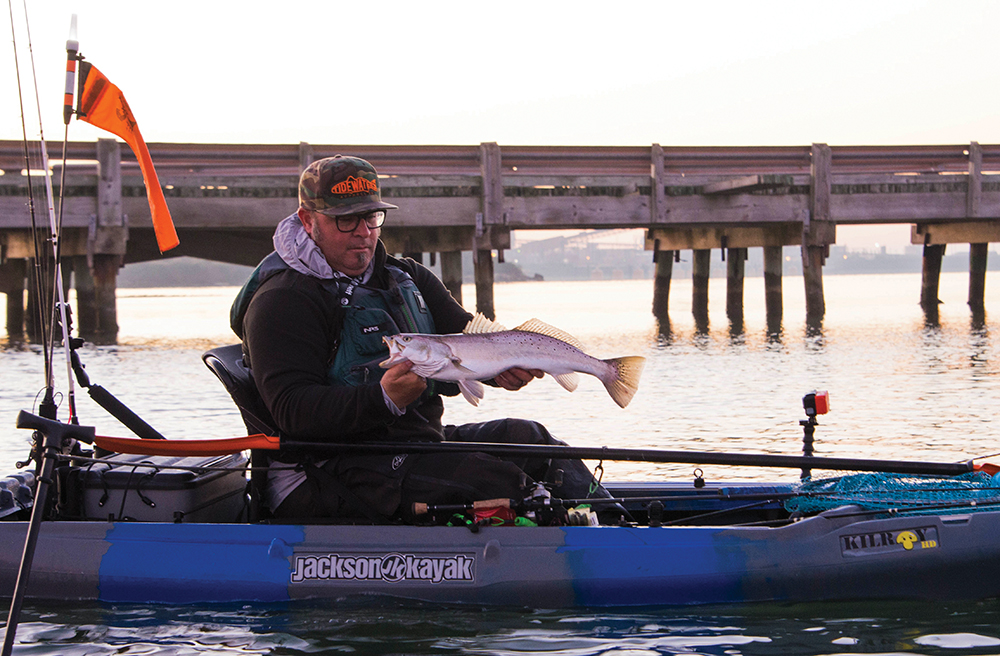 When it comes to spending time on the water during the winter months, one of my favorites is chasing big trout. There is nothing finer than a violent headshake as a big trout comes thrashing to the surface on a brisk morning. February is regarded as the kickoff to what many anglers call trophy trout season, that usually lasts through March and into April. The hunt for these big girls is never easy, or by any means guaranteed, but it is always a very rewarding experience when you succeed in tying into one.

The past few years on Sabine Lake have been disappointing and I’ve not enjoyed much success catching trout during the colder months. I fully understand the effects of successive extreme flooding events in the watershed and focused instead on tuning my wintertime redfish skills. Our local trout fishery is beginning to show signs of recovery and hopefully my craving for big trout action can be once again fulfilled here at home in the coming years. In the meantime, I decided I would break away from Sabine this year and chase big trout where they are more plentiful.

I reached out to my buddy, Dustin Nichols, also a member of the Jackson Kayak Fishing Team. I shot him a message asking if he’d be willing to show me around and put me on some fish. He quickly obliged and setting a date was not an issue as we work the same basic schedule with the same days off. We picked a day in the middle of the week knowing that boat traffic would be lighter.

I checked with Dustin the evening before the trip to dial into the game plan and gain a feel for what to expect. He laid out the plan and I got a feeling it was going to be very similar to fishing Sabine, just more oyster shell. I prepared my rods with new fluorocarbon leaders; one with a Corky Fat Boy and the other a Magnum Zoom Fluke for its large profile. I loaded my kayak and fishing gear and then set the timer on the coffee pot.

Anticipation running high, I didn’t get much sleep and was up before my alarm went off. I figured that I might as well get an early start and hit the road, eager for my first Matagorda fishing trip. I’ve fished a large portion of the Texas coast but this would be my first time between Freeport and Rockport. Three hours of pushing down asphalt, I pulled into the launch point and found Dustin ready and waiting. It’s great to have fishing buddies with the same enthusiasm as your own. Unloading gear and prepping to launch, we went over the layout of the area we would be targeting and then headed out in the darkness.

Arriving to our spot, we could barely see the tops of the oyster patches, a signal that the tide was a bit lowered than expected. No worries though, this usually means the fish will be congregated in the deeper troughs around the reefs. We started off throwing Fat Boys and it didn’t take long for Dustin to hook up. He landed the first trout of the morning and it was a solid 20-incher. In the next few casts we both managed to put a few smaller fish in the kayaks and it was looking like it was going to be a good day.

Right about the time the sun broke the horizon, Dustin set the hook on a fish and we both knew he had a better one on the other end of the line. After a few good headshakes and other attempts to get free, Dustin had her in the net and it was photo time. We snapped a few quick pics and sent her back to give another angler a thrill.

We pushed on after the bite slowed and made our way to another nearby flat. Paddling up, we could see mullet flickering all across it and prayed it was a sign of hungry predators on the flat with them. Dustin quickly hooked up with a smaller fish and I was not far behind. I felt a slight thump and my initial thought was it was another small trout, until I set the hook. I knew instantly that it was a better fish, but also knew it was not a giant. That was my biggest fish of the day and she was a little over 20 inches; it felt good to finally catch a solid trout!

The action remained fairly steady with only a short lull right before the tide switched, but once it did we went right back to catching. Long about noon I decided to stretch my legs and began to wade around the edge of the reefs in the area. I didn’t have to go far to find more trout and was soon hooking up every second or third cast. No, they were not giants, but they hit the Fat Boy aggressively and the steady action made for a lot of fun. I called Dustin to come over but he was catching them just as fast as I was. We decided to call it quits after another hour and left them biting.

Making our way to the launch, we began reflecting on the day and agreed that even though we didn’t find the big trout we hoped for, it was an above-average day of catching and a very enjoyable outing. I truly appreciate these type days. Dustin commented that changing the limit to five trout on the middle coast has done nothing but improve the fishery, in his opinion. I am anxiously looking forward myself, hoping the five-fish rule will improve the Sabine fishery the same way.

I made the drive home very pleased with my first day at Matagorda and want to express sincere thanks for Dustin taking time to share his home waters and show me around. Probably won’t be long and I’ll be headed back down that way!