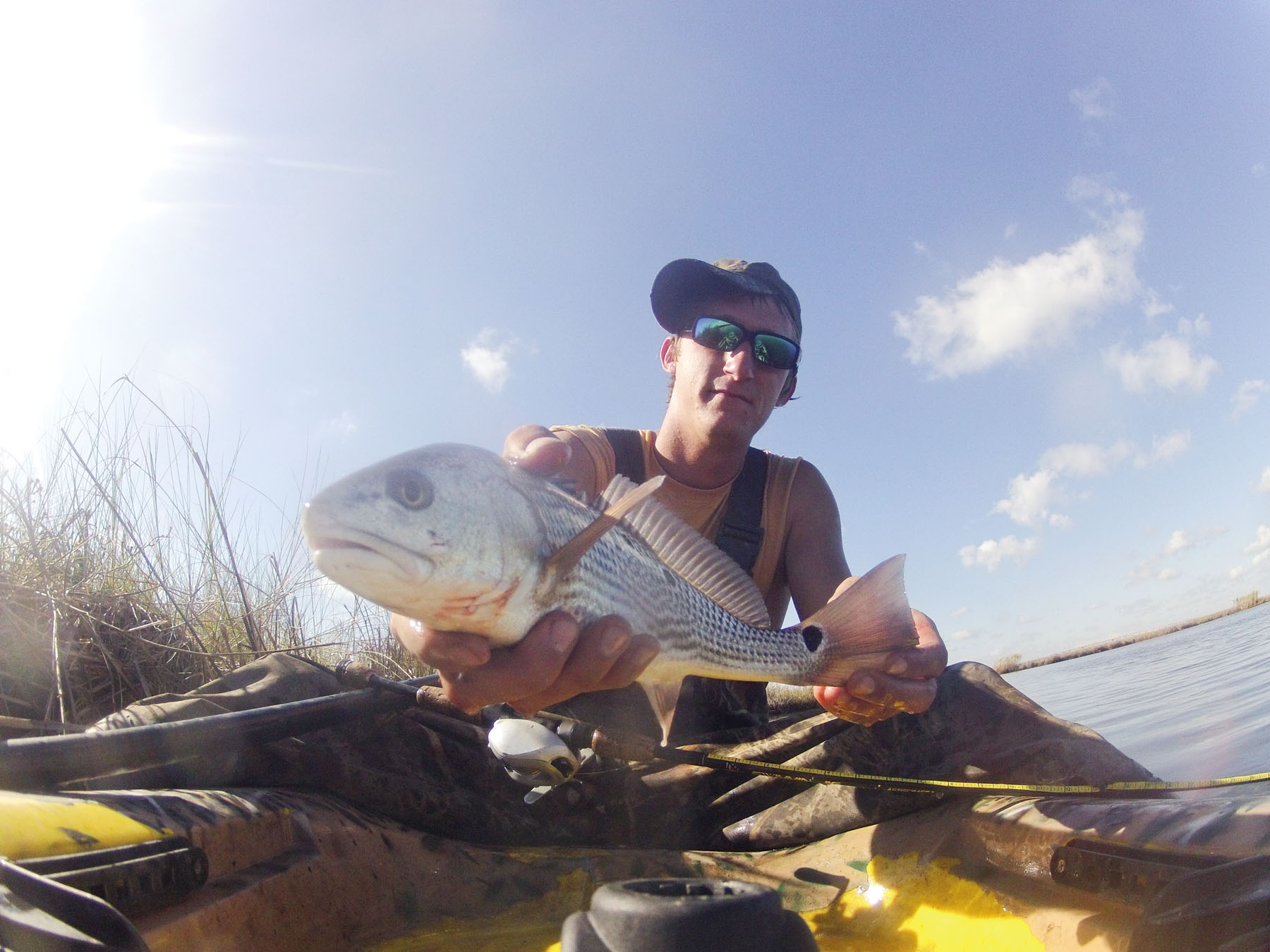 Recently, I have been trading emails with TSFMag reader, David Roberts. David is a Texas kayak fisherman who first wrote to tell me about his best-ever trout from his kayak. After trading a few emails I found out that he is also the representative of Lamar University's kayak fishing club/team. This was very intriguing to me so I asked him to elaborate. Below is David's original email message and following that you will find details and information regarding the collegiate competitive fishing he is involved in.

Via email: "Hey Cade, I'm David Roberts from China, TX and I always enjoy reading your articles. I went fishing at Keith Lake two weeks ago and caught a 28" trout on topwater first thing in the morning. Got the blow-up, the fight, and everything else all on my GoPro, which made for a great video. This trout is the best fish I have caught in my kayak and I will never forget it. I have caught several reds bigger, but a 28" trout is unforgettable."

As our email correspondence continued David shared his involvement and participation in competitive collegiate kayak angling. I found it all very interesting and hope you will also.


Via email: "Cade Simply put, it is an organization built to engage all of the college kayak fishing clubs, allow them to connect, and further, to compete for great prizes such as college scholarships, kayaks, etc.

A representative from the college registers their club at collegekayakfishing.com. Then, the club grows organically within their college. Clubs can be as few as three members, or as many as they can accrue. Once the deadline for registration has passed each year, CKF then sets the matches for each region. Matches consist of your team competing against the other schools in your division. A match consists of one Saturday of fishing from 7:30am until 3:00pm at a specified location, and against the designated team on your schedule.

Teams from each school are comprised of three anglers. Scoring is done via the catch-measure-photo release method. A team's final "score" is essentially the number of inches they combine to land as a team. Each angler must have one fish contributed to the team's score. From there, two anglers are allowed to submit one additional fish. This equals a team's final five fish score. If your team's score is greater than the other teams, you win your match!

There are a two separate series that colleges can enter Bass Series or the Saltwater Slam Series. In the bass series, anglers are allowed to catch any black bass to make up their team's scores. In the Salt Slam Series, teams can catch any of the following species to comprise their totals redfish, seatrout, snook or flounder (anglers submitting a second fish must submit a different species from their first entry).

This was the first year for the Saltwater Series so it took a little bit of time for us to work out the kinks and give feedback from the other colleges to the people who promote and organize the events. Drew Gregory from Jackson Kayak is the guy who heads it all up with some help from his friends. We had four tournaments this year running February into May. Our tournaments were at Bayou Vista, Texas Bayou, Anahuac State Park, and Lake Calcasieu. Since the team scores are derived by length, naturally, you tend to target redfish but we had won our tournament in Anahuac with three trout that measured 26, 25.5, and 25 inches. So you don't necessarily have to have big redfish to win.

The series championship was held at Biloxi, MS this year. LSU won and Lamar Team 2 got second. Lamar Team 1 got third with me and my brother Blaze winning 2nd and 3rd place individual honors. The plan now is to start the new tournament season in October 2013 and have eight tournaments, with the championship sometime in May.

Winners in Biloxi received three Jackson Kayaks, scholarship money, and all kinds of other great prizes. We came out really good with all kinds of stuff, Bending Branches paddles, Kkatat life jackets, LifeProof cases and plenty of lures.

As far as starting the program at Lamar, I found out about this in January and I never thought that within two weeks we'd have enough people for two teams and be a recognized organization by Lamar. We usually hold monthly meetings and go fishing together pretty regularly."


So – guessing that you will feel the same – I must say that I am very impressed with David's initiative to get the Lamar club started. Kayak fishing is a great sport and it is fun to see and learn about the different avenues in which one can participate, be it simply for recreation, or competitively. Thank you David for your detailed recap on your efforts and best of luck in the coming tournament season!

David also asked me to write about one of my biggest or most memorable fish in an upcoming article. Several fish/trips come to mind. I think I have the perfect topic for next month...