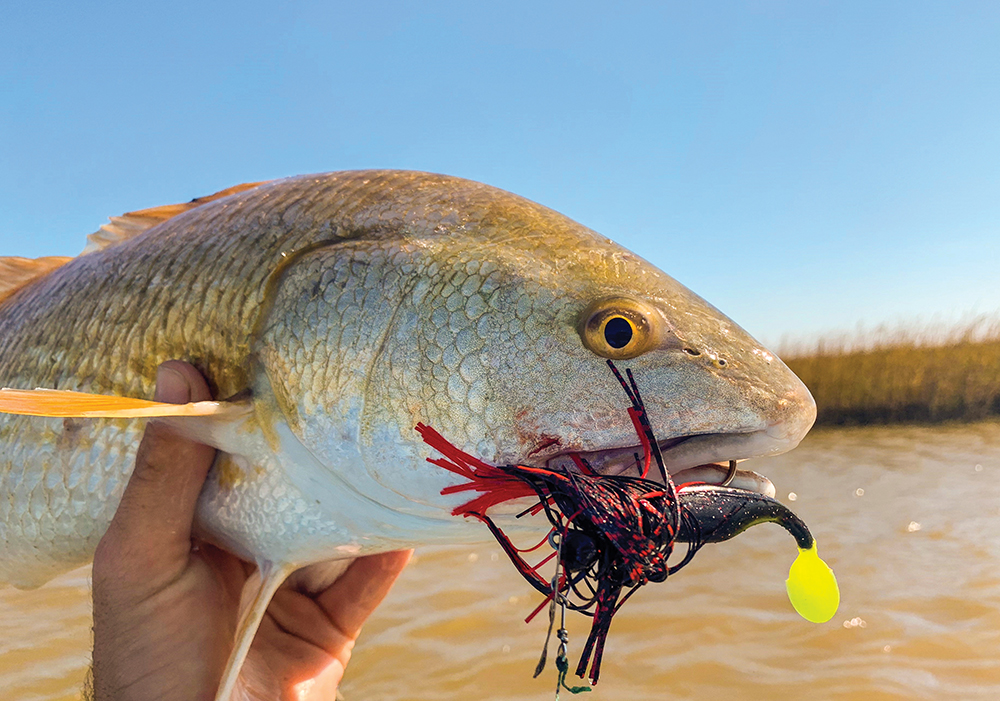 Well, the end of the year is approaching and, as always, it has me wondering where the time went. I know where a majority of my time was spent, and unfortunately it was not on the water. Work seemed to get in the way a lot this year but that’s how life goes, I suppose. However, in hindsight of it all, I cherished the days I was able to get out there and cast a line.

Besides work, I did have some great fishing opportunities arise and luckily for me I was able to take advantage of them. I got to fly fish on one of the best rivers in Montana and was able to check off brown trout from my bucket list of species. I was also able to check off permit and pompano while fishing in Florida’s Everglades. Both of these adventures have made me even more eager to travel in my quest for fishing adventure.

In the meantime, here at home, I was lucky to make a trip to the surf and get in on the bull red run at its peak. This only happens once per year as the mature reds stage in the surf and nearshore gulf for spawning. The best action usually occurs in a rather narrow window, so you have to be there when it is happening or wait until the next year. Naturally, I do my best not to miss it. Being a kayak fisherman, I prefer to wait for calm surf days, which makes the timing of the trip doubly difficult. Taking a kayak into rough surf can be a recipe for losing gear, or worse. I’ve learned to wait it out and considered myself lucky when it all came together.

I called around to several kayak fishing buddies to see if anyone was interested in making a surf trip. Brice and Tony said they were in but all the others declined. The three of us formed a plan and decided to meet at the beachfront around daylight. Along the way I stopped and bought a dozen fresh-dead mullet, a few extra sand weights, and new hooks.

As I pulled off the road I was greeted with calm seas and my buddies waiting on me. We unloaded quickly, got rigged up, and made our way out. Brice brought along two-way radios that made communication between the members of the group easy.

I paddled out about 300 yards and Brice went 75 yards beyond me. Tony elected to stay closer to shore and slow troll a mullet to see what he could find with that method. It didn’t take long for him and we could see in the distance, his rod bowed and being dragged around by a strong fish. Tony hooked up again shortly thereafter while Brice and I got into a double hookup a few minutes later. These were all very large fish, exactly what we came for! Quick photos were snapped and all the fish went back to continue their spawning activities.

We replayed that scene for most of the morning and decided to call it a day just before noon. We landed a total of eight bull reds and a nice blacktip shark. The only casualty we had was one of Tony’s rods that got jerked into the water by a fish after the butt section broke while in the holder. I guess incidents like this are to be expected when you play with big fish. I only got one morning to chase the bulls but it was enough to get my fix until next year.

Here recently, I was also able to squeeze in another day of fishing for a few hours before heading to work. One of my favorite things to do is catching redfish after the water drops from a cold front. I kept an eye on the weather and bided my time for a mid-week opportunity to beat the weekend crowds. I finally was able to pick my day and headed to a set of flats I usually only fish this time of year. I tied on a Z-Man Chatterbait and stood up in the boat hoping to spot cruising or feeding fish. It didn’t take long and I had a nice fish coming directly at me. I pitched just in front of the fish, fluttered the Chatterbait, and the fight was on. I got her to the boat and couldn’t be any more excited since that was the first fish I have caught in several weeks. A couple quick photos and she was back on her way.

I continued across the flat and caught fish after fish on the Chatterbait. An amazing productive lure. I personally like throwing it this time of year because the water tends to be dirtier with the larger tide swings and the extra vibration helps the fish find it a little easier. Anyways, I made my way back and saw plenty of fish along the way, and even got to take a couple for dinner. I couldn’t have asked for a better two-hour trip.

Even though I didn’t get to fish as often as I wanted, I would say this has been an incredible year of fishing overall and I am thankful for the opportunities I was able to enjoy. Here lately, things are looking up for our local fishery on Sabine Lake with the trout population trying to bounce back. Hurricane Harvey dealt our fishery a cruel blow and trout have been nearly nonexistent ever since. I spent two nights on a buddy’s lighted pier this summer and we caught more 10-12” trout than I have ever seen. We only managed a handful of keepers but it was a reassurance of what we all hope lies ahead.

Merry Christmas, and take advantage of every fishing opportunity that comes your way in the New Year!