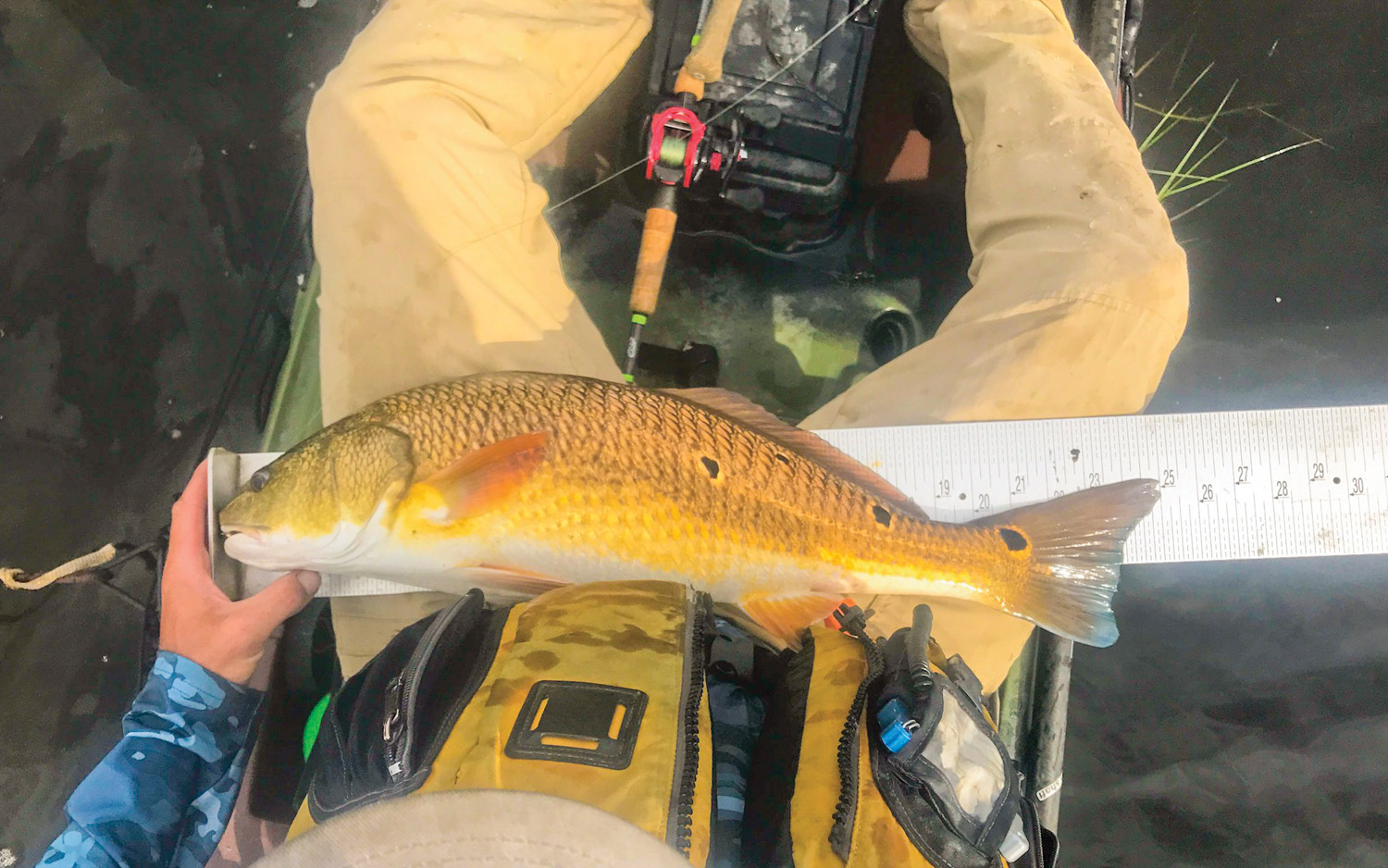 In redfish tournaments we hope for 28-inchers. This 25-incher, while not really a heavyweight, has a chance to score well in the Spot Pot category.

When it comes to kayak fishing the Texas coast, one of my favorite aspects is the multitude of places an angler can launch their kayak. By having this ease of access, there are several areas that can be targeted from every possible angle. Often times this has left me staring at an area on Google maps and wondering how that specific end of the lake would be. I have heard reports of a few fish being caught in certain places but I never make time to see for myself.  At times it is difficult to break away from my go-to spots to check out new ones but sometimes it is necessary.

Here recently, the Elite Redfish Series was hosting the second tournament on my end of the coast. Knowing that it was going to be locally, it left me with plenty of time to find a solid "A" spot; it would also give me an opportunity to try a few different areas and see if I could come up with a "B" spot. I figured this would be a perfect time to go to a new area and see if I can find fish away from some of the more popular spots.

Now this is the dilemma when it comes to fishing a new spot.

When arriving to a certain area, it appears to be more than ideal to hold fish. It has good tidal flow, plenty of bait, patches of grass etc. It has everything except for fish. You spend a full day scouting a promising area and wind up empty-handed. I believe this is when the worst decision an angler can make occurs. After one scarce trip to a new area, you automatically deem it worthless and never pay attention to it again. That is the epitome of the old saying "You should’ve been here yesterday!" Just because fish were not there while you were does not mean that particular spot is always barren.

Here recently I ran into a similar situation, fishing a spot that was new to me. My morning started early as I made a 3-mile paddle to my destination and I was eager to begin fishing. I eased into the area and started to assess my surroundings. The first thing I noticed was the tide coming in and I assumed that it would push some fish back into the pond. As I paddled, I kept running into small pods of shad and mullet and occasionally seeing a few crabs scurry away from my passing kayak. I continued following the shoreline and consistently encountered patches of grass. From the looks of it, I thought for sure I was about to wear the redfish out.

I stuck with my usual plan, which is to move a steady pace down the shore and cover a good amount of water with my lure. I continued for the first few hours of the morning and had not spooked or seen anything, nor did I hear a fish crash the bank or scatter bait. It was dead. I then decided to start paddling and not stop until I found activity that made me want to cast. I paddled nearly the whole perimeter, which was a few miles, and I only pushed one fish.

After getting back to the launch I was dumbfounded on the trip I had just made. Everything seemed nearly perfect for the area but at the time, it just was not holding any fish. I resumed my weekend and went back to an area that I had some confidence in. I caught a few fish and felt that on tournament day I could pull a few fish out of there to bring to the scales.

The next week while sitting at work, I could not help but to think about why that one particular area was not holding fish. I went and scoured Google Maps once more and tried to figure out where I went wrong. Not fully convinced that it was a lifeless pond, I decided to give it another try the following weekend.

Just like the last time, my morning started early and it was another nearly perfect day. The only difference this time was the tide was flowing out fairly quick, and we had a little stronger south wind. As soon as I entered the area, I threw out the ol' trusty spoon and it did not take long and I was hooked up. Two casts later resulted in another healthy redfish and just like that, three casts produced two solid fish. I continued down the same bank that I fished previously and the results were the complete opposite.

I continued making long casts down the bank and the hookups kept coming. I repeated this scenario dozens of times around the perimeter of that lake that had appeared barren on my first visit and was stunned by the results of that day. After a lull period in the catching, I realized that the tide had switched and started coming in. And just like that, the bite was over.

This is just a prime example that fish tend to move in and out of an area daily and if you are not there at the right time, you will never find them. I think it is important to not automatically judge a spot after one trip. Certain conditions like tide, wind and time of year can determine when and if the fish will show up. If the area shows to be ideal to hold fish and your first trip there, you come up empty handed, listen to the old saying. Try, try again.