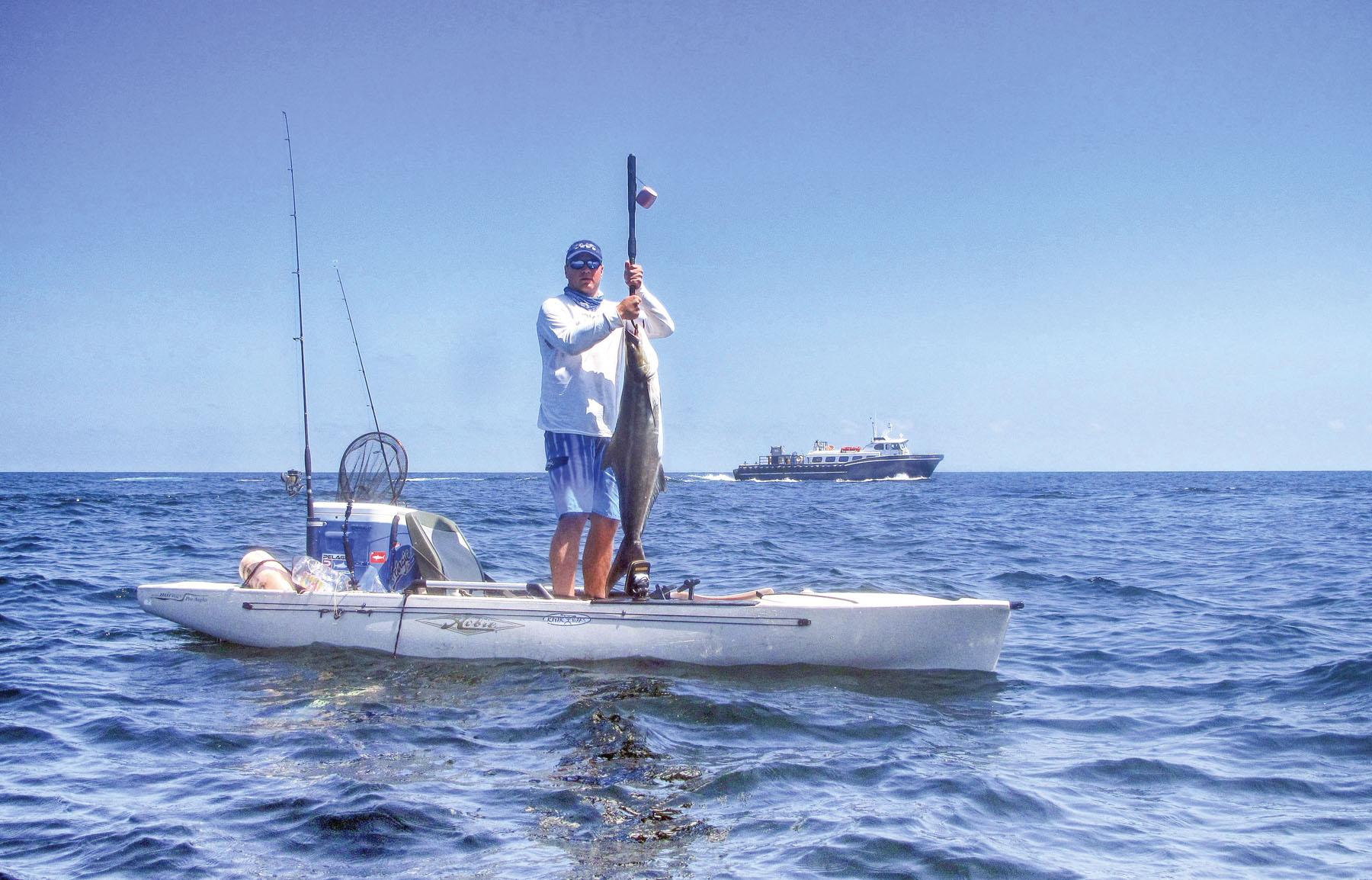 A solid ling taken by the author.
Mother Nature's moodiness lashes the Texas Gulf coast starting in March and continues into April. With what seems endlessly pounding southeast wind comes treacherous nearshore currents, sargassum seaweed, and warmer water the warmer water brings a variety of fish species within easy reach of our shores that are mostly absent during colder months. If you venture to nearly any structure within a few miles of the beach you are likely to encounter cobia - a sleek and robust gamefish favored by anglers for sport and also as table fare. Cobia (Rachycentron canadum) can be found in nearly any temperate, tropical, or subtropical region around the globe. During springtime, Texas nearshore waters are under a ling invasion.

The coast of Texas and Louisiana is peppered with offshore oil and gas platforms that provide some of the best structure for a great number of species. Ling (most common name for cobia here in Texas) will often gather within the shade of these platforms feasting on crustaceans and small finfish that are also attracted to the structure. While many anglers traditionally target ling at platforms from larger boats, I prefer paddling to those I can reach in my trusty kayak. The voyage can be strenuous and obviously not for everybody, still it can often prove fruitful for what I consider one of the tastiest fish in our waters (hence the name lemon fish). Being stealthy around the platforms does have its advantages but despite all that, ling are a very curious species and will often inspect your vessel upon arrival although this visit may be brief before they disappear back to the depths of the rig's shadowy shelter.

On the serious side, kayaking for ling poses many unique challenges. First off, due to the offshore paddling distance, it is important to pick your days properly. Calm wind and minimal wave heights increase not only the safety factor but also increase your range. There are many factors that could put you or your kayaking buddies in danger if the elements are not conducive. You do not want to be battered by the waves or over-exert yourself against a raging current. During the early spring there can be periods of randomly developing fog, perhaps thick and soupy, which causes additional danger on the water. Alertness and careful planning also plays a key role whenever handling a ling of any size. Cobia are very powerful and seem to use their reserve strength at the most unexpected times, which usually is right at the gaff or in the kayak. I have witnessed firsthand an angler pulled out of the kayak while gaffing a large ling. These fish can inflict injury with the whack of a tail or the unexpected throw of the hook. When in the kayak, these fish demand the angler's utmost respect!

Fortunately for anglers this is a species which both hunts and scavenges. Cobia will often gather in groups and orbit whale sharks or follow in formation behind large manta rays, other large sharks, or even large turtles such as the leatherbacks. The reason for this is the opportunity to pick off an easy meal as they scavenge off their "leaders" feedings. Chumming is therefore often extremely productive around structure and in addition to any ling, you'll likely also lure up snapper, grouper, and other reef fish. Since ling are highly opportunistic feeders, they do not often pass up well-presented bait. I personally prefer fluorocarbon between 40-60# with a small, sharp Owner brand circle hook. While waiting on a cobia to appear you may decide to drop down and target species such as snapper and grouper. In this case, it is important to have a separate rod pre-rigged and ready to pitch at a ling should one decide to conduct a "drive-by."

While ling are physically quite different from sharks their behavior can be very similar, especially feeding habits. They cover a lot of area around weed lines and platforms and are known to feed on anything they can get in their mouths. Over the years I have caught cobia from the jetties, piers, boats, kayaks, and even from the surf. In fact, the largest ling I ever landed came as by-catch while shark fishing the beach in April a decade ago, and this brute stretched every inch of five feet. I have also caught many from the kayak weighing up to 40lbs.

Regardless of where I catch them, I notice a pattern in the stomach contents of the ones I fillet - crabs and hardhead catfish. If you are able to pitch a small crab at a curious cobia; it's usually game on in short order! The big surprise though is the hardhead catfish. While some would see hardheads as the ultimate trash fish of the sea, I have indeed caught large cobia using live hardheads (fins clipped) for bait. Try it; you may be surprised!

Our ling fishery is quite healthy, due in part to the strict regulations from Texas Parks & Wildlife. We are able to keep only 2 fish per day in Texas waters (which is plenty for table fare) at a minimum length of 37 total inches. One of the biggest concerns when fishing for ling, whether out of a kayak or in a boat, is that it may be hard to tell a barely legal fish apart from a non-legal fish. The majority of fish I encounter are right around 3 feet in length and a school of 10 or more fish that size may all be present. You'll have to learn self-control and if a fish appears close to the legal size -DO NOT GAFF IT. You can still carefully land a fish that size without the gaff and you certainly do not want to stick an undersized fish and then try to release it. This would be unethical in a sporting sense and certainly not compliant with the length regulation. You will likely have your chance at a larger fish as ling can actually grow massive and tip the scales at over 100lbs. There are rumors of specimens to 150lbs from around the world, however, the I.G.F.A. all-tackle world record hails from Australia at a still monstrous 135lbs.

Due to the incredible fun-factor of angling for ling, along with their reputation as excellent table fare, ling are among my top five favorite species. If you can make the trek to the platforms and go properly prepared, odds are you'll have a great chance at encountering a few and with luck hopefully even hooking into and landing one or two.
Remember, kayak fishing offshore can be risky and it should be deemed mandatory you have at least one equally capable and well-prepared fishing partner to join you on these adventures. Please check the weather and then re-check it right before you go out, especially during the spring months. If everything leads to the green light - go for it! Cobia are nothing short of a blast to play with and having a 50 pounder pulling you away from the rig on a yak-ride is an adrenaline packed moment you will cherish forever.