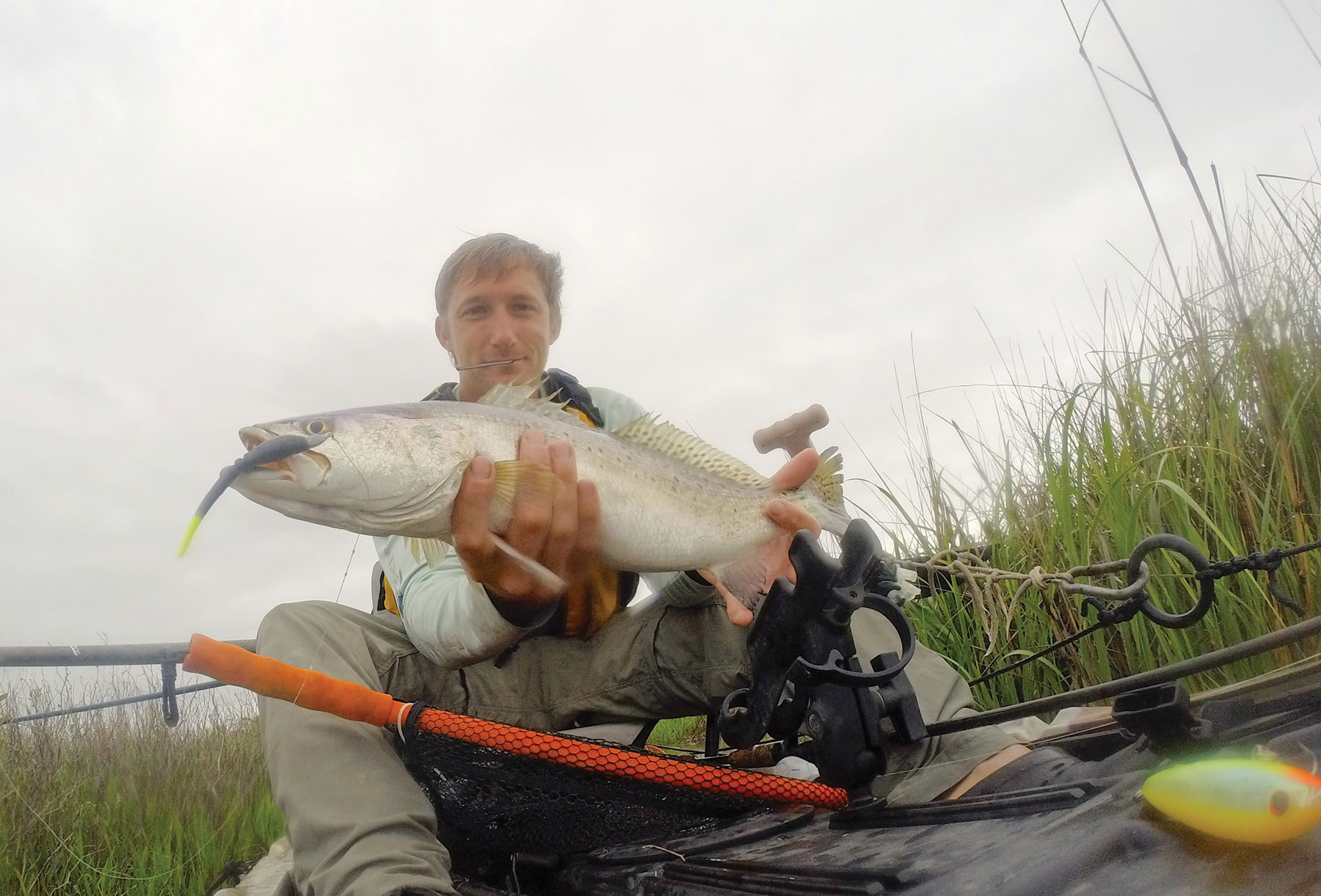 Author with a fat marsh trout…in a redfish tournament! Roberts: I only managed one in a two-fish event but she was a beauty at nearly twenty-eight inches.
Summer has finally arrived in Texas and the fishing is really starting to turn on. The redfish have moved back to the flats and the trout are schooling in the lakes and bayous. Along with good fishing comes more competition on the water. Online forums become flooded with photos of fish and reports of how well anglers are doing. Some people just enjoy catching fish but others take it a step further, entering tournaments for the challenge of catching fish when it really matters.

We are currently at the peak of tournament season and this gives anglers the opportunity to test their skills and knowledge of the water. I have been fishing tournaments just about every weekend, all over the coast. I have fished local events and all the way down to Delacroix, Louisiana. The outcome of how my teammates and I performed has varied, some days were better than others. Along the way I have been able to fish new places and learn different tactics. At the weigh-ins you can occasionally squeeze out a little information and get some insight of where and how others fished.

One of my favorite things about kayak tournaments is the strategy that goes into it and we have learned that time management is a key factor. You have to choose fishing spots wisely and be confident that there are fish in the area; starting the engine and relocating across the lake is not an option. Also, I need to mention that getting deep into the marsh and losing track of time will hurt you, especially when you have 15 pounds of redfish to drag back, and the calculated 20-minute paddle turns into an hour.

A similar occurrence befell my partner, Chad Lyden, and me at Delacriox, Louisiana while fishing the Adventure Fishing World Championship. The basis of the tournament was that at launch time everyone was given a map with five checkpoints identified, two of which designated as "double points." Arriving to a checkpoint, a team receives a token and then starts fishing. When you catch a fish you move to the next checkpoint and the total inches landed wins.

Chad and I decided to paddle to a "double point" for our first stop. We began fishing and could not buy a bite while other teams were coming and going. We were so focused on catching a fish there that we lost track of time. Unfortunately we were not able to hit the minimum of three checkpoints and successfully land a fish–time management got the best of us. On a side note, Delacroix is one of the most amazing places I have ever fished. Not many places that you can catch bass, sight-cast redfish and catch a limit of trout in the same pond.

The very next weekend the Saltwater Boys here in Southeast Texas were hosting a kayak Texas slam tournament. After talking to several anglers we all knew that catching a slam would be difficult due to the recent rains. Trout had been hard to find, so landing one would put you ahead of the crowd and a giant stepping stone to the winner's podium. My partner was Stu Flowers and we were on the water early. We had a slow start on a windy day but not long after daylight I heard him yell that he had a trout. Excited, I paddle over and she measured 15 1/4". We'll take it!

After another hour or so we decided to move and find a redfish because the weight would help out against anyone that had two fish as well. We arrived to our launch and we started making our way to a familiar reef that has given me redfish in a time of need. Lo and behold, five casts later I landed a 25" redfish on a black and green Norton Sand Eel. This gave us four a half hours left to catch a legal flounder to complete the slam.

We fished that spot without a flounder bite and decided to hit a few other holes that are renowned for them. After catching several in the 10-12" range I began counting the minutes until we had to leave to make the close of the weigh-in. Despite our best efforts we did not manage a full slam. After checking in and weighing our trout and red we learned that nobody had turned in three species. Stu and I ended up third and we will gladly take that any day of the week, especially with only two fish.

The following weekend brought my favorite tournament, the Lone Star Kayak Series. This tournament has always attracted a field of prominent kayak anglers. It provides a substantial number of prizes and pays out to the top 25% of the field. My personal favorite aspect is the "half pound live bonus" awarded for keeping redfish alive. The intent is obviously to promote catch and release, which I am all for.

I started my morning off in a rain suit but thankfully the weather cleared quickly. I began fishing in a back bayou trying to stay out of the wind and was doing everything I could not to drift too fast. Right at daylight I got a bump and when she started to pull I knew I had a good one. I netted her, put her on a stringer and threw her on the measuring stick. She went right at 27 3/4", a money fish for sure. I just knew that I needed one more and I would be looking good. I continued to throw my Norton Sand Eel and was only lucky enough to pull in a 22" trout. I headed to the scales and my only fish went 7.19 pounds, but enough to land me a small paycheck. I mingled with anglers that I have not seen in a while, talked fishing and had an absolute blast. I would like to say congratulations to the winner, Joe Strahan, with a two fish weight of 18.25 (with live bonus)pretty impressive. Also, I would like to give credit to Werner Paddles Pro, Jeff Herman, for the photos I included here.

I would like to encourage all fishermen to enter the CCA Texas STAR tournament that runs Memorial Day through Labor Day. CCA does a great job in conservation along the Gulf coast. The STAR tournament appeals to everyone with scholarship prizes, trucks, boats and motors awarded to winners in various categories. Who knows; you might be one cast away from trading that paddle for a new bay boat and a truck to tow it!