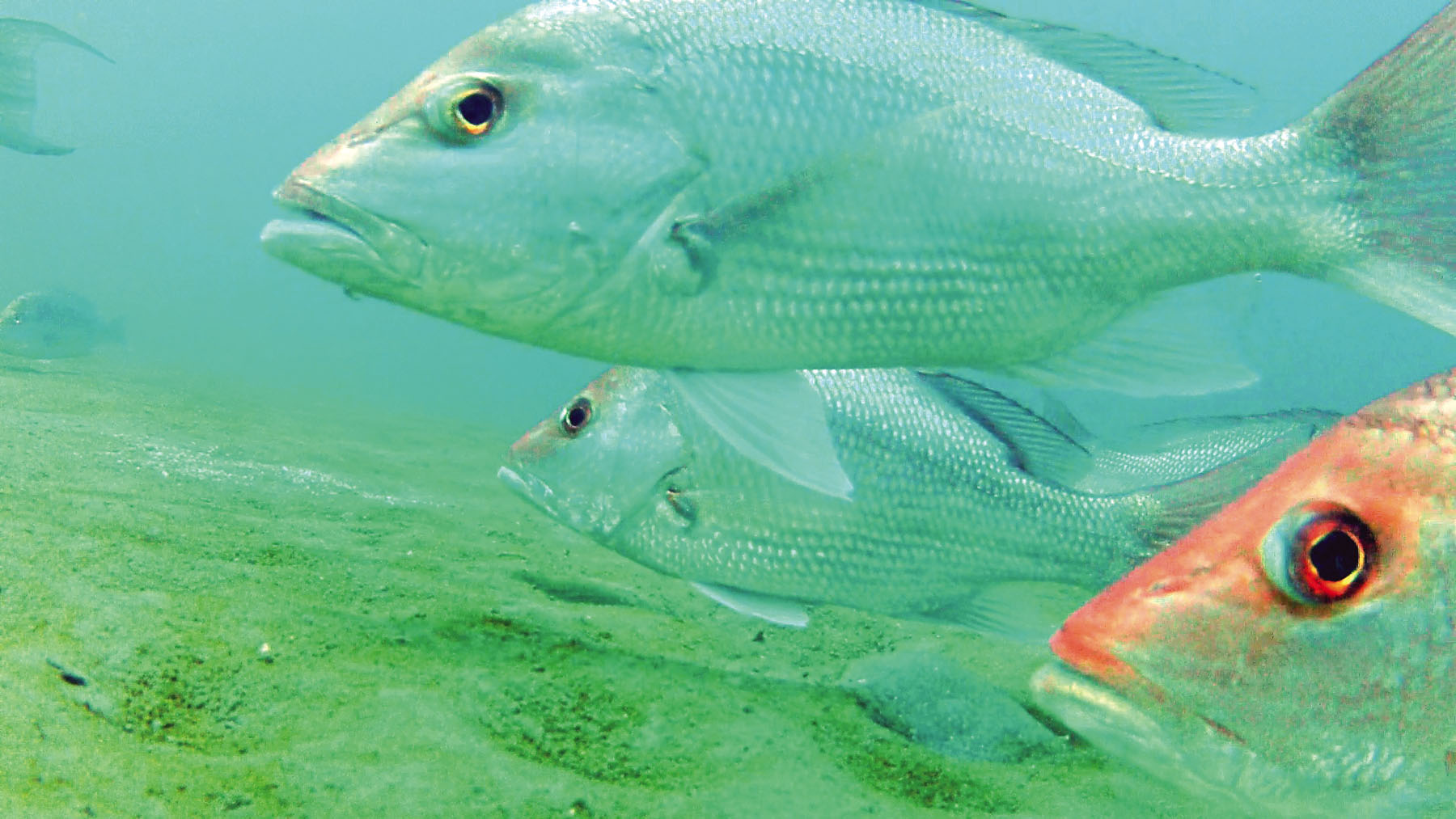 When snapper are located near major structure they are usually numerous.
As a youngster, my early offshore days entailed jumping aboard a party boat out of Port Aransas to seek lunker snapper and furious king mackerel - much like many outdoors recreation families do to this day. Nearly a decade ago I landed my very first red snapper from the kayak. This popular reef fish has been a personal favorite throughout my angling career - if for no other reason than the incredible table fare they offer. Along with the tasty fillets, they are quite predictable around certain structure and always a lot of fun to catch.

It is no secret that the recent federal red snapper regulations have infuriated nearly all who love to hunt and harvest these critters. While the laws do seem unbalanced against sport anglers (which in reality is an understatement as regards the current federal water snapper season), the law is the law and must be obeyed. Fortunately though, Texas does not adopt the federal regulations for our state waters (inshore 9 nautical miles). All ecosystems in the Gulf are not created equal and TPWD have rightfully noticed that we have a substantial and stable red snapper fishery. The result of which has been that anglers in state waters are allowed a year-around season with a bag limit of four fish. This means that despite a closed federal season, you may still fish for red snapper as long as they reside within state waters.

Where does the realm of red snapper and kayak fishing merge? As I grew older and began to seriously explore the world of kayak fishing, my time was greatly expanded "beyond the breakers." King mackerel were a common target and provided unrivalled thrills with their bait smashing attitude and hard fighting ability. Their attraction lured me further offshore where I soon learned about the oil platforms and standpipes and these unique structures brought me into a new world of kayak fishing opportunity. When I caught my first snapper from the kayak many years ago, my initial thought was, "Wow - And I didn't have to pay to fish from a charter boat!" I marveled at the thought that I am really catching red snapper from the kayak. From that day on I looked at things from a different perspective noticing many potential possibilities from aboard the small plastic battleship.

As the years went by I worked exhaustively to perfect (as much as possible) my version of the art of snapper fishing from the kayak. There were some very interesting factors which came to light and other times nothing seemed to make sense. I noticed that the presence of a school of snapper may be in a different location at varying times, on varying days. I would get frustrated when I couldn't find the school knowing I had laid into them just a couple days prior. At certain offshore platforms the snapper would at times gather as far as 200 feet away from the rig. Finding them would become a tedious process of scanning the bottom with the fish-finder. Their movements and location would also depend on the strength and direction of the current and tides. However, when you did locate the fish, it was ultimately game on!

The most widely practiced method for catching snapper, regardless of location or vessel, is to simply drop a weighted line with cut or live bait. Snapper are not usually picky eaters so if they are around, the action should be almost instant and consistent. The largest hindrance to snapper fishing is the ever so pesky triggerfish (which the feds have also somehow deemed threatened in our waters). It is important to note that sharks also love snapper, and if the action mysteriously shuts off for no apparent reason it is usually due to the arrival of sharks. When things come together and the bite is on, then the fun really kicks into high gear! The benefit of shallow water snapper fishing from the kayak is your freedom and ability to release undesirable snapper at will, which means you can hold off for your eventual sow. While it usually is no problem to obtain a limit, most "keeper" nearshore red snapper only run 15-25 inches. In regards to the Kayak Wars tournament, I actually release the vast majority of my snapper, back into the water unharmed.

There are countless locations within our nearshore waters, many secret and others not, where you can find healthy populations of red snapper and other reef fish. Structure of any size makes all the difference in the world and where there is structure, there are plentiful fish to be found. Unfortunately the government's recent "Idle Iron" project has been on a rampage removing these delicate habitats. This poses a challenge for many offshore kayak fishermen who wish to target fish such as snapper. The only advice I can offer is to explore the rigs before they are gone for good. While new platforms may randomly pop up, the already established structures will not last forever. There is some good news though red snapper are a very prolific species and despite the removal of rigs or devastation of red tide, the inshore specimens repeatedly bounce back in great numbers and find suitable habitat somewhere. And they are not restricted solely to oil platforms, any wreck or rock structure will always and forever house populations of snapper. A good fish-finder on the kayak will be your best friend.

Kayak fishing offshore is often a tiring pursuit, and usually the closest rigs on our coast are a mile or two out. Being in the best physical condition possible helps contribute to your safety on the water. Many people tie up to a platform when they get out there which is fine. However, if you are getting battered by the waves during this, then the seas usually are too big to be deemed safe for a kayaker anyway. Your own personal kayak selection is highly important. Over the years I have discovered that the most optimal setup for offshore kayak fishing is with any pedal-drive system. This creates a near hands-free capability which means you can be on the move or maintain your position in a current AND fish simultaneously. This is ideal when bottom fishing for snapper and other reef fish.

Kayak fishing is all about freedom and discovering the ability to explore and create your own adventure. When the realization that one can actually catch highly-prized food fish (red snapper) from a simple kayak comes to light, the possibilities become endless. Angling enthusiasts, whether they catch and release or responsibly harvest, do thoroughly enjoy this species. From a kayaking point of view, there is a great sense of achievement when you land a sow snapper from your own kayak knowing people pay captains and charters high dollar fees to do the same. While it is not for everyone, those who put in the effort and plan a strategic and safe trip will often be rewarded. Remember, safety should always come first especially when beyond the breakers. If you think and act smart, karma will eventually follow.