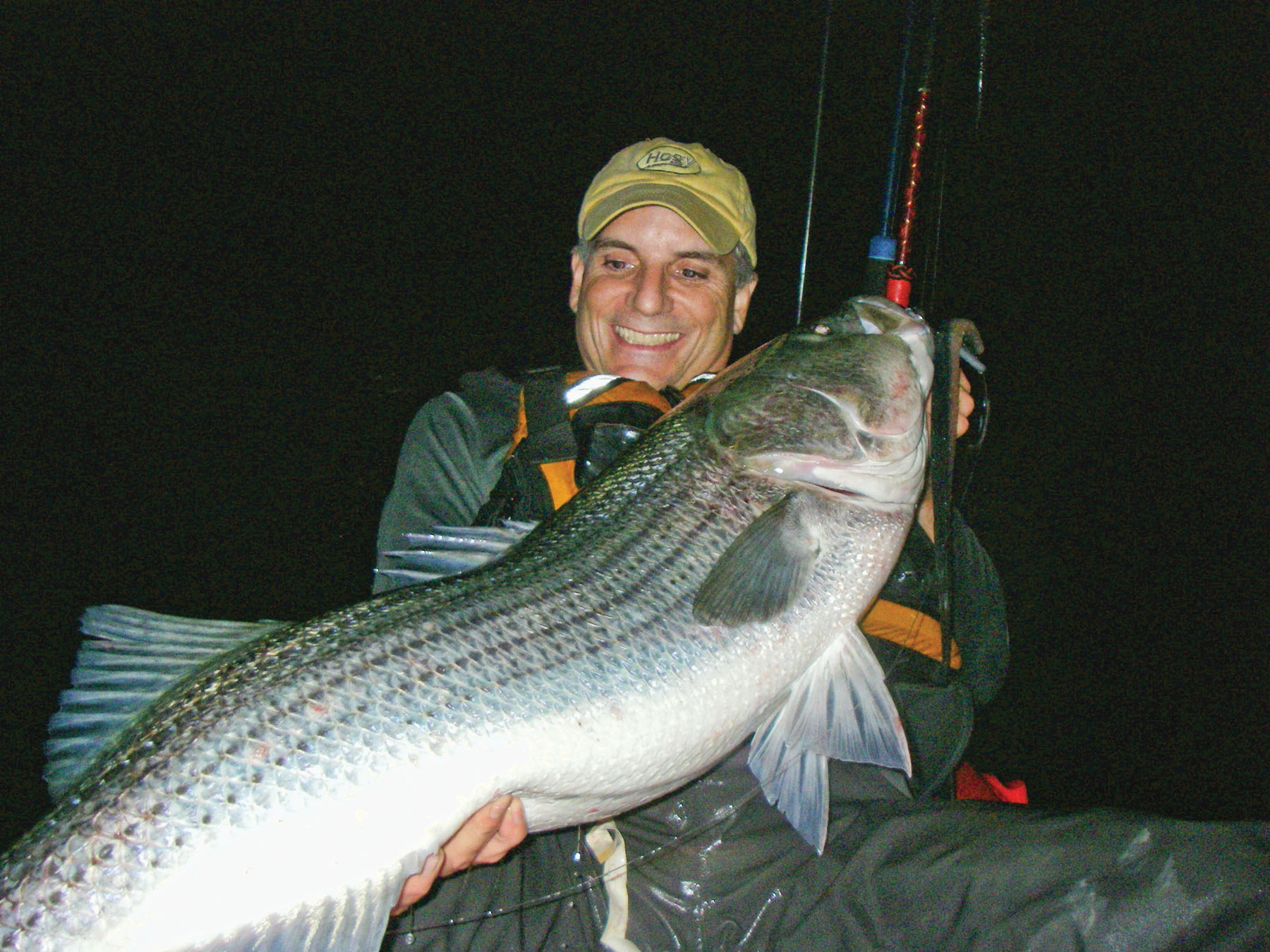 Eric Harrison’s amazing striper entry.
The definition of war is the act of engaging in hostile combat against another group or nation. Transferred to the water and armed with a paddle and an array of tackle, there is another type of war being waged. For seven years Kayak Wars has reigned supreme as the original and premier online kayak fishing tournament. Participants battle it out through a months-long season to see which gladiators of the sea will emerge victorious. Anglers from all over the country (and beyond) have joined the excitement in this unique tournament. Each year, Kayak Wars grows leaps and bounds gaining new anglers and adding regions and additional species. Battlegrounds are wide-spread as some aquatic warriors are trolling up tuna and sailfish along Floridas east coast while others endure harsh conditions for monster stripers along the mid-Atlantic. Closer to home, patient anglers are stalking tailing redfish in the shallow bays of Texas.

It is important to note that the foundation and principal of the Kayak Wars tournament is and always has been quite simple to provide a way of recording data, sharing photos and rewarding anglers for catches from the kayak all the while promoting the most aspect of having fun fishing from a kayak. The fact that this is a free-to-enter, non-profit tournament is another cornerstone of its huge success. We are very fortunate to have had sponsors jumping onboard since the beginning donating thousands of dollars in prizes to be awarded for angling achievements. A superstar among these has been Hobie Kayaks. Foremost, we promote the mentality of just going out to have fun on the water and enjoying the adventure. While we encourage participants not to expect to receive prizes, the truth is many anglers are happily rewarded for their year-long efforts. Not bad for a free tournament!

Kayak Wars 2012 broke barriers on many fronts. Traditionally, Kayak Wars starts on February 1st and the battles rage until December 14th - virtually a full year of heated and exciting competition. During the 2012 event more than 250 teams (3 to 5 anglers) totaling 900 individual participants from all across the country and Caribbean duked it out for kayaking glory. During the 2012 tournament participants submitted an astounding 27,000 individual entries, all measured, photographed, and logged online. With numbers like this it is easy to see how Kayak Wars has become one of the largest kayak fishing tournaments in the world, and that is something we are extremely proud of!
Now for you paddling freshwater junkies, please do not feel left out. There is a separate freshwater division from which a good portion of those 27,000 entry-catches originated. Some spotlighted freshwater catches were incredible lunker bass, catfish, and even sturgeon thrown into the mix. Each species has its own scoring system which results in every submission earning points within that category. General points are awarded for each valid species, and additional points are earned through submission of trophy catches for the species.

Key features that paved the way for explosive growth have been the simplicity and archiving ability of this tournament. Anglers can log-in and submit their fish info which is then recorded to an online database. The database stores all the catch info and photos and keeps detailed statistics for each submission (size, date, species... etc). The archival aspect is the first of its kind for a wide community of anglers. In addition, the tournament maintains a database and currently five years of submissions data are available. This means anglers can log-on and check out their personal career statistics, i.e. how many flounder they caught in 2009, review their personal best of each species, etc., during their Kayak Wars participation. The possibilities are endless and this provides an interactive league feel that keeps people interested.

This past year was the largest event ever, both in terms of anglers and submissions. And because of the massive participation, there were naturally some very admirable and mindboggling kayak catches. Multiple billfish and an onslaught of tuna showed a good presence this year for the southeast region. Texas anglers were split between bay and offshore action and contributed a great variety of species submissions. The northeast had some killer striper action and anglers in Cuba fared well on the reefs with snapper. There were also new species added, many of which were oddball freshwater specimens. With over 150 species eligible in Kayak Wars everyone was given an option to play with. More and more species and locations are added each year and the Caribbean and Hawaiian divisions were a warm welcome.

Some key statistics for the 2012 Kayak Wars season were as follows... Team HOOK1 BLITZ! out of the Northeast Region were the supreme champions for this year with an incredible 28,080 points, led by kayak fishing icons Eric Harrison and Pat Gallagher. The team combined for 1737 individual fish submissions - very impressive to say the least. Team Reef Raiders of Texas earned top honors in the south-central division, headed by Don Wilchek and a solid crew. Persistent anglers Robert Long and Doug Richardson helped Team Ship Face of Florida dominate the southeast with 15715 points. For the northwest region, Roy Marcum pushed Team NWKA1 over the top landing an onslaught of great rockfish. Some individual achievements have to be recognized as well. Veteran Brian Nelli was the Species Champion for the year with 33 species spanning the gamut of fresh and saltwater. Ironman Eric Harrison posted total leading score for Kayak Wars with 526 submissions and 13250 points. The 2012 Kayak Wars freshwater crown went to Team MKF led by loyal members Capt. Dan Marshall and Lucian Gizel.

Overall Kayak Wars had a remarkable and memorable year. On the horizon, 2013 should shatter even more records. Each year, more and more anglers join the fun for this highly anticipated event. The season is scheduled to start on Feb 1st, with registrations being open through April. Projections show well over 1000 participants this year with even more prizes to give to happy anglers. Remember, Kayak Wars is a totally free event and all you need to compete is a kayak, measuring device, and a digital camera. We are quite certain the fun and memories of each and every adventure will remain for a long time.

Sponsors are vitally important to the success of any tournament and we want to recognize those who have contributed to Kayak Wars. A special thanks goes out to Hobie, Yak-Gear, Yak-Shack, B&S, Sunjammers Watersports, Greenfish, and all the other loyal sponsors and supporters which make this event possible. We are anticipating the return of each of these supporters and are also currently accepting new sponsors for 2013. We are all very excited for what lies ahead and want to see you joining in the fun. So get your angler teams together and register today at kayakwars.com. Its time to wage war on the water!