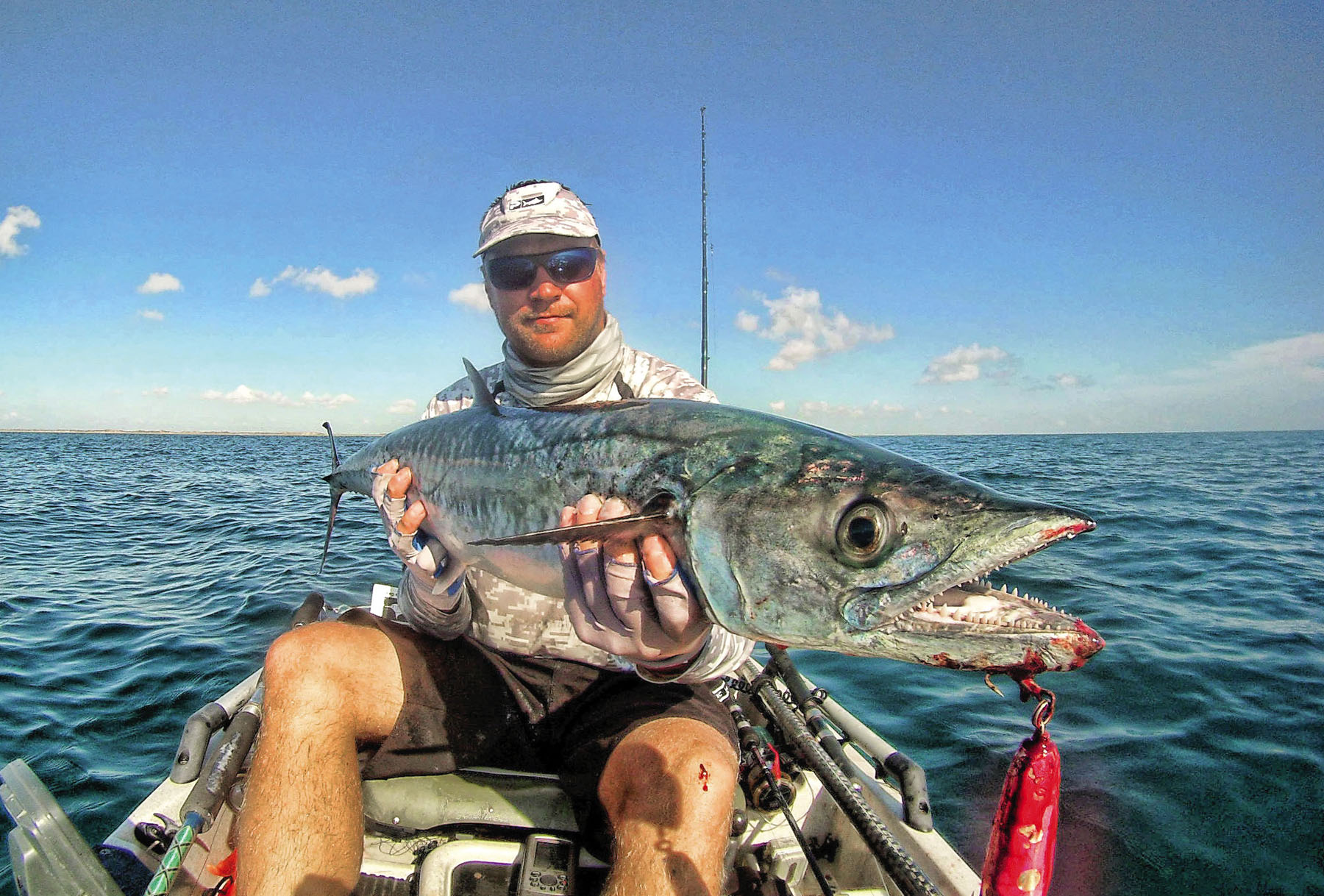 Autumn king mackerel on topwater.
The arrival of fall is marked by cooler sea breezes with increased bait and predator action in surf and nearshore waters. We see the violent demolition of tightly-organized baitballs occurring all along the beach as an array of mullet, anchovies, shad, and menhaden flood the surf in overwhelming numbers.

The beauty of offshore kayaking in October is the fact that carnage is usually close to shore. While the blistering heat of summer has most predators pushed out deeper, the cooling autumn temperatures bring these fish to the shallows. Sharks will hunt in water so shallow at times that they will often beach themselves chasing and feeding on dusky anchovies. Tarpon and king mackerel will be seen within one hundred yards of the beach as they explode through massive pods of mullet. The migration routes of the baitfish species bring all of this right to our doorstep, and for a large portion of this protein-rich prey, their journey will end right here in the jaws of predators.

As long as there are no weather hazards or other anomalies, this October is expected to bring a great deal of excitement for coastal anglers. Sargassum is traditionally very light or non-existent, allowing for spectacular surf fishing conditions. Baitballs the size of basketball courts can appear less than a quarter mile from the beach and with them come battle-worthy jack crevalle and sometimes even the prized cobia. While skipjack literally immerse themselves within the clouds of anchovies, the mullet schools will often contain large Spanish mackerel, bluefish, and red drum. Some of the largest concentrations of gulls and pelicans you will ever see will be picking off hapless baitfish pushed right onto the sand.

On your average year, October is our last great hoorah of offshore kayak opportunity. When conditions are prime an early morning window typically opens just prior to sunrise and usually lasts a couple of hours. Later in the afternoon the madness can reignite as ferociously as ever. These are the days when I have my kayak ready for quick deployment as I drive the beach, surveying bird activity.

It is important to note that these baitball buffets will travel up or down the beach and sometimes at fairly decent speeds. Depending on the predators chasing them, you may not even have a chance to catch up unless you launch well ahead in the direction they are running. It is always tempting to give chase but this can be costly in terms of energy. Savvy kayak anglers are always careful to reserve strength for a final burst to reach the action and also for fighting a brute of a jackfish or maybe a wandering shark.

Tracking down the action is only half the battle. Sometimes the fish will be so aggressive they will pick up anything you throw. Other times, and especially with bonito and little tunny, you must "match the hatch" exactly or they will completely avoid your lures. For pure sport I love to throw oversized topwaters; jack crevalle and king mackerel will absolutely explode on them when they are feeding aggressively. I have consistently found that the larger the lure, the larger the fish you are likely to catch.

Live baits also work very well but at times it seems there can be too much bait available for predators to zero in on yours. Make no mistake though, jackfish and reds will suck down a mullet without thinking when you get it in front of them. If you really want a thrill, whip out the fly rod and battle a sight-casted tarpon from the kayak!

One of the most incredible natural sights you will likely ever witness can occur this time of year and, mysteriously, without a huge horde of baitfish present. Several times I have found incredible congregations of game fish in the surf, predators of mixed species swimming together. Certainly not a common thing, still it makes me wonder whether these fish had just wiped out a school of bait and were simply milling about waiting for another to appear.

My first such encounter came around midday and I had been seeing activity a short distance offshore. The kayak was already rigged and I was planning to venture out and chase the birds. The surf was semi-calm and as I paddled past the third bar I began to notice shadows amid randomly scattered bait. Paddling a bit further, and with better water clarity off the bar, I could see there were bull sharks all around me. I quickly canceled the bird chasing plan.

Several minutes passed and I began noticing other species in the mix. Countless large cobia were hanging out, as though escorting the bulls. I love to throw lures to cobia and went immediately to work, hooking one on the first cast. However, after landing it, all further attempts resulted in getting intercepted by Spanish mackerel. The Spanish would then get picked off by a bull shark before I could get them to the kayak. Finally I just put the rod down and sat there taking it all in.

King mackerel and jackfish cruised all around me and a tarpon rolled just feet off the bow. The gathering was increasing and I witnessed spinner sharks in excess of seven feet joining the bulls. As minutes ticked by bunches of anchovies the size of a coffee table began to appear. Several times I saw sharks racing into them–mouths wide open, gulping as many as possible. Spanish mackerel and skipjack were in force throughout.

After witnessing this gathering for more than twenty minutes, and recording plentiful video and photos, I decided to venture back to the beach to rig baits. After all, there were some very impressive bull sharks making their rounds. A gentle breeze was pushing me back into shore and I drifted via the wind.

As I crossed the second sandbar I looked behind the boat and I will never forget the scene. Eight or ten large bull and spinner sharks just several feet behind were trailing me in about six feet of water. While I knew (or hoped) they weren't going to attack the kayak, just seeing this was the most terrifying moment I've ever had on the water. No doubt, had I ended up in the water at that moment, I believe I would have been the source of another feeding frenzy.

Making it safely to the beach, I took a few a minutes to reflect on what just transpired. A raw and powerful memory that I will cherish forever, a spectacular gift from Mother Ocean, on a beautiful autumn day.