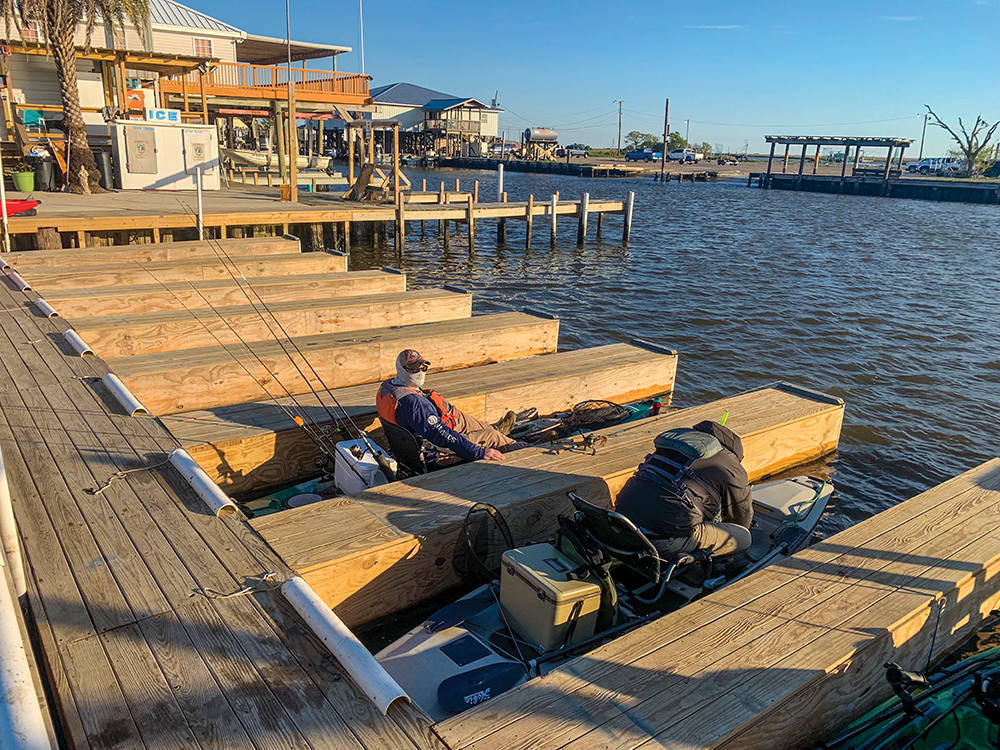 One of my favorite things to do when planning a fishing trip is targeting locations off the beaten path. There is nothing more exciting about packing up and heading to a destination that is only known for one thing, and that’s fishing. Fortunately for us, our neighbor to the east provides an endless amount of fishing opportunity. Once you pull off the main highway you will weave through small towns with names that you can barely pronounce; that’s how you know you are getting close. Then you make a turn down a dead end road that runs along a bayou that is filled with crab traps and shrimp boats and at the end, a boat ramp. If you navigate the backroads successfully you can find a place that has become more popular for kayakers in the recent years and one of these is Pointe Aux Chenes.

Here recently, a member of the Jackson Kayak team reached out and extended an invitation to meet up with some of his friends down in PAC. I had a few days off and I figured I was due for a short road trip to catch some fish and renew some friendships. I loaded up my kayak, a handful of rods, and was headed southeast in short order. Of course my journey included the mandatory stop along the way for a shrimp pistolette and some boudain. It’s nearly impossible to drive through Cajun country without these.

There is something really special about PAC that sets it apart from everywhere else. There is a bait shop, kayak rental and kayak launch facility that was designed and built strictly to serve the kayaking community. Eddie and Lisa Mullen are the owners and have done a fantastic job in creating a destination for paddling anglers. In addition to the launch they also have a houseboat and a cabin that can be rented for those who might entertain staying a few days. Eddie also offers boat services for mothershipping kayak anglers deep into the surrounding marshes. Putting it all together, with the store, the kayak launch, mothership transport, and overnight accommodations available, Eddie and Lisa offer a truly unique staycation destination.

As soon as I arrived I was greeted warmly by Eddie and given directions to some nearby places if I wanted to make a quick dash into prime redfish country. I wasted no time sliding the kayak into the water and took off across the Louisiana marsh. Some clouds had moved in blocking the afternoon sun, which pretty much cancelled sight-casting but…no worries…I still had faith there would be plenty of fish available. I began throwing a gold spoon on the edge of a grass line and it was not long until I hooked into a nice mid-slot fish. I continued on and picked up a handful of others before deciding to paddle back to the house boat.

Another team mate, Chris Funk, was there and he too had made an afternoon foray. We compared notes from our evening efforts and fortunately we’d both found a few fish. He told me that he had spoken with others of our party and they weren’t going to be arriving until a little later that night. So we decided to fire up the BBQ pit and turn on the flood lights hoping to attract a few trout under the glow. It didn’t take long before the trout moved in thick under the lights. Always looking to have fun with a fly rod, I rigged my 4-weight with a small offering that those trout just loved. Long about 10:00 pm, Jameson and the other guys showed up. Having driven all the way from South Carolina they were eager to get out the truck and join in on the fishing. We had a great time catching trout and catching up all the news, gossip, and fishing stories since our last get-together.

Morning came early with everybody eager to gather tackle and gear and hit the water. The group pretty much split up and headed in different directions while Jameson and I stayed together and headed toward another stretch of marsh. Luck was with us right from the beginning and we added a few to our stringers for dinner that evening. Good thing because the wind picked up around midday and we ended up calling the day early. Our whole group reported good fishing until the wind came up and that evening we dined heartily on blackened redfish fillets and dirty rice – a true bayou country classic.

Once again we stayed up trying to catch some trout under the lights while Chris was busy catching smaller crabs for bait on his heavy rod. Rounding up a good supply he finally decided it was time to get in on the fun and chunked out a crab and settled in to wait for a bite. It was not long until all of our attention was directed towards him as his rod was bent over and the reel was screeching. He reeled in a giant black drum and was happy as can be. He ended up catching a few that night and made his bait gathering efforts worthwhile.

The next morning we awoke to vastly different weather conditions. The wind was coming out of the north at 25-30 mph and the temperature had dropped into the 50s. No surprise, the tide had dropped as dramatically as the temperature. Some of the guys braved it and found refuge in the lee of a marsh shoreline but the fish simply wouldn’t cooperate. The next day would be the same.

However, when you’re stuck at an end of the road place with fishing on temporary hold, there are still a few benefits to be realized from being in an area with such bountiful resources. Mr. Eddie informed us that many of the local oyster and crab boats fuel up at his shop and he had ordered a sack of oysters and several dozen crabs. That evening he and Lisa a few of their friends joined us as we shucked oysters and boiled crabs well into the night. True southern hospitality.

The next morning I reluctantly loaded up and headed back home; I had to be at work that evening. The rest of the group was planning to stay the rest of the week and, fortunately for them, the weather became much friendlier and the fishing really turned on. I want to give Eddie and Lisa a big thank you for the hospitality they showed us. I have been there several times and they have always treated us very kindly. If you are ever wanting to make a roadtrip to a great kayak fishing destination, pull off the highway and follow the road until it dead ends at Pointe Aux Chenes.

As always, if you would like more information on fishing Pointe Au Chenes, just drop me an email and I will be happy to point you toward some great fishing in a great place with good people.