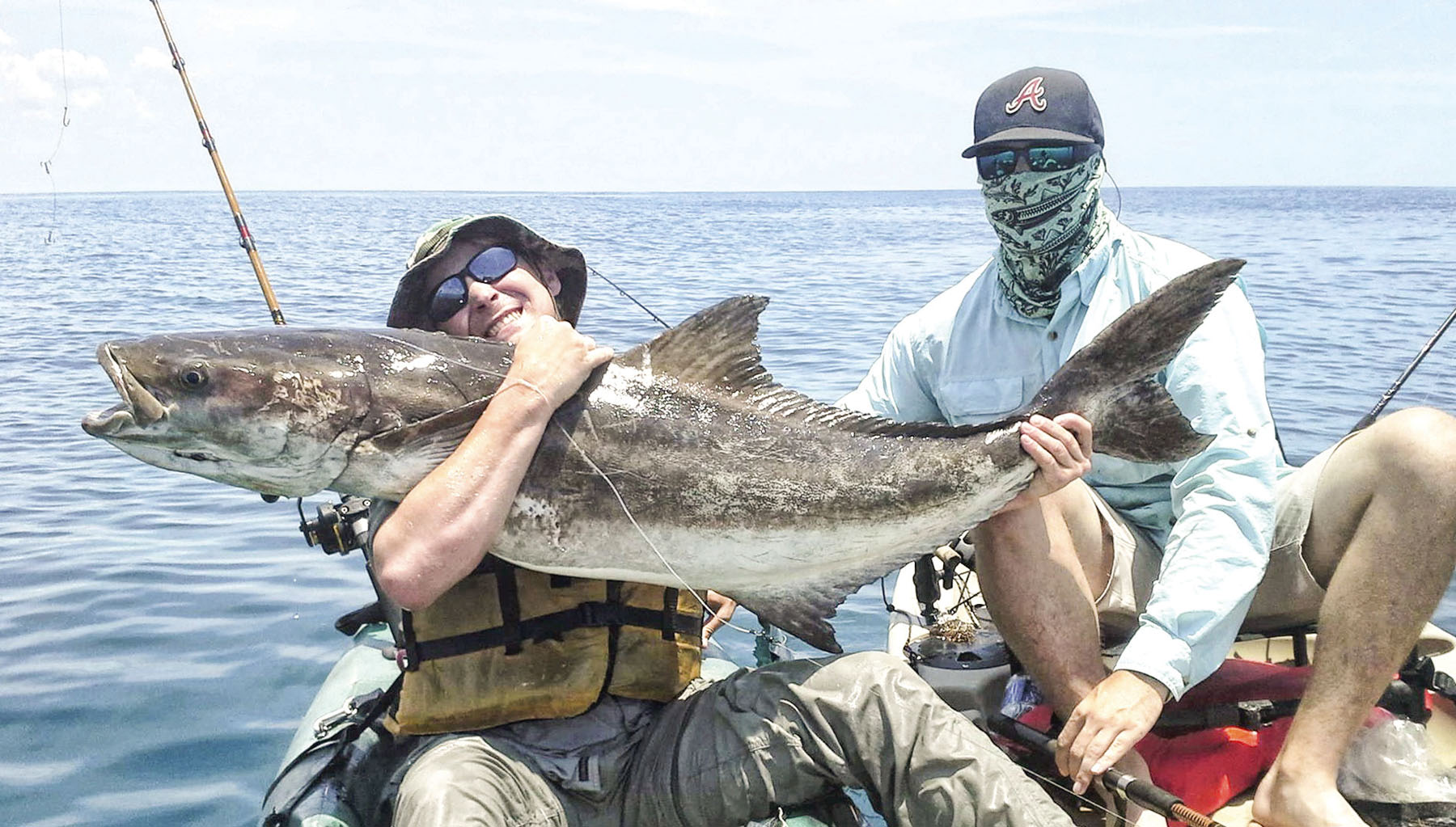 Nearly a decade ago a fishing buddy and I hit upon a novel concept for a fishing competition. We were both very enthusiastic and involved in the kayak fishing craze that was already growing by leaps and bounds, and our particular interest was in the surf. Until that time, it was commonly thought that venturing "beyond the breakers" in a kayak, in search of large fish, was both dangerous and ludicrous. My rival and good friend, T.J. Pilgrim, was exploring the offshore waters along the upper coast. There, they were discovering a remarkable kayak fishery for oversized red and black drum. Meanwhile, I and other surf specialists here in South Texas had already been targeting king mackerel and sharks from the kayak. Yes, I said sharks–everybody thought we were crazy!

Our friendly competitiveness sparked an idea. We would assemble a North vs. South format, like the US civil war, between T.J. and myself. We would each organize a 5-man team and battle it out for bragging rights. A point system for various fish was developed, as long as they met the state's minimum length criteria for that particular species. Catches would be photographed and submitted online where points were issued to the two teams. At the close of the "season," the team with the most points would be declared the winner–thus the dawn of Kayak Wars.

During that inaugural 2006 season, we had basically no idea how many folks were watching and the amount of attention our little competition was generating. A surprising number of anglers begged that we bring it back for 2007 and let them be part of it. It was then that we decided to officially open this private event to the public. At the time, Kayak Wars was completely free-to-enter (and even to this day there is still an early-bird free registration period). This drew the attention of the masses of new kayak fishermen getting their feet wet in the early stages of this exciting sport.

For the 2008 KW season we opened the boundaries to include the entire Gulf coast, thus allowing multiple teams from Florida to join in the war. One of the most impressive things about this format of fishing competition was the fact that you get to share photos of your eligible catches, along with the ability to view everyone else's who are involved in the tournament. Being able to log-on and check out a photo of 150 pound tarpon, barely being held high enough for a photo alongside the kayak, made it even more impressive and addictive.

As the seasons went on, so grew Kayak Wars. Another good friend, Rick Underbrink, also addicted to kayak fishing and KW, approached me with an idea to handle and process the incredible mass of catch/photo submissions that was streaming in daily. Up to this time we relied on single, manual data entries to keep track of everything. Rick took his own crash course in computer programming to learn PHP code and created an automated submission system. Such an idea had never been implemented before, in any fishing tournament, anywhere in the world.

Essentially, Rick created a system whereby a participating angler could log into their account and automatically enter their own submissions with their points showing up in real-time. This ingenious tool was a game changer. Now, with a rapidly expanding database, the possibilities became endless. Not only could we save and maintain current catch data, the data remained available forever. Anglers could easily access career data, much like a professional sports league. Another benefit came in being able to establish and maintain a "record catch" file for the largest of every species ever entered in Kayak Wars. To this day, as each species record is bested, there is a great outpouring of praise and respect for the new record holder from the KW community.

With each season, improvements and features are incorporated into the Kayak Wars program, attracting even more anglers. By 2011, KW had spread to include the entire US coastline and the freshwater category was added. Great interest from the Caribbean resulted in the addition of the first foreign region. One of the Caribbean nations - Puerto Rico, was home to several dedicated teams and heavily promoted the event. Kayak Wars was going viral in the fishing community.

In 2013, the competition went global when teams from several European countries joined the battle. Teams from the UK also came onboard. By now, the online submission system was reaching a heavily loaded condition and new code was added to accommodate additional regions and species. Currently our database includes more than 150,000 submissions and photos - unmatched by any tournament in the world! During 2014 alone KW logged more than 40,000 event submissions from anglers around the globe–an absolutely remarkable feat.

Last year was astonishing for Kayak Wars. Everything from monster speckled trout to impressive red snapper were landed in our [Texas] region. The team to come out on top here was Anglers Elite led by long time KW participants Jantzen Miller and Todd Hart. The south-east region comprised mostly of Florida anglers also posted very impressive catches. Epic wahoo were landed along with a total of 35 billfish from the kayak. In this region, Aquatic Apes came out on top, piloted by Austin Collins and Adam Fisk. In the north-east, Elias Vaisberg helped push KFA -NY FLEET 1 with outstanding catches of stripers and tautog. In the Pacific, team NCKA dominated again with 15555 points. In the north-central freshwater only region, Trout Mafia reigned supreme through relentless leadership of Kalvin Sabel. Other notable teams were The Dutchies in the UK, Border City Anglers from Canada and FISHING ADDICTS KFT from the Caribbean. The 2014 Kayak Wars Angler-of-the-Year award went to New Jersey angler Larry Newman with a mind-boggling 10435 individual points.

Kayak Wars 2015 already promises to be a year to remember. New teams from the remote island of Guam have been added to the mix making things quite interesting. Registration is currently open and you still have time to enter yourself/team for the next couple of months. The tournament runs ten full months and will conclude December 14th. In its history, Kayak Wars has given away nearly $100,000 in donated prizes and awards, made possible from all our fine sponsors.

Prizes have been distributed to over 750 deserving individuals and the prize list grows each year. The split is 50/50, distributed to the top teams/anglers in each region, and the other half is given out in a random drawing to those who have garnered various "Kayak Man" points throughout the season. Kayak Man points are earned through various individual achievements; 3-fish single day slams, species count, and record-setting catches. Just another way to spice things up the on the water!

Kayak Wars is fueled by fun, honesty, and the interactive concept that has made it popular since the beginning. Kayak Wars is as unique as kayak fishing itself and its exponential growth runs parallel to that of the sport of which it is a part. The organizers and promoters of Kayak Wars TAKE NO MONEY. In fact, we often contribute from our own pockets to cover shipping expenses of prizes at the end of the year. Do not enter solely in expectation or hope of being awarded a prize. Instead, enter for the fun of the sport and the fact that you are sharing your catches with others who share your enthusiasm. Then, when you are possibly awarded a prize(s) like many are each year, consider it a wonderful bonus!

Whether your passion is targeting redfish in coastal waters or stalking lunker bass in Texas lakes, you are in for quite a ride. Register for Kayak Wars 2015 and/or inquire about sponsorship opportunities at our website: kayakwars.com.

Good luck, be safe, and Let There Be War!