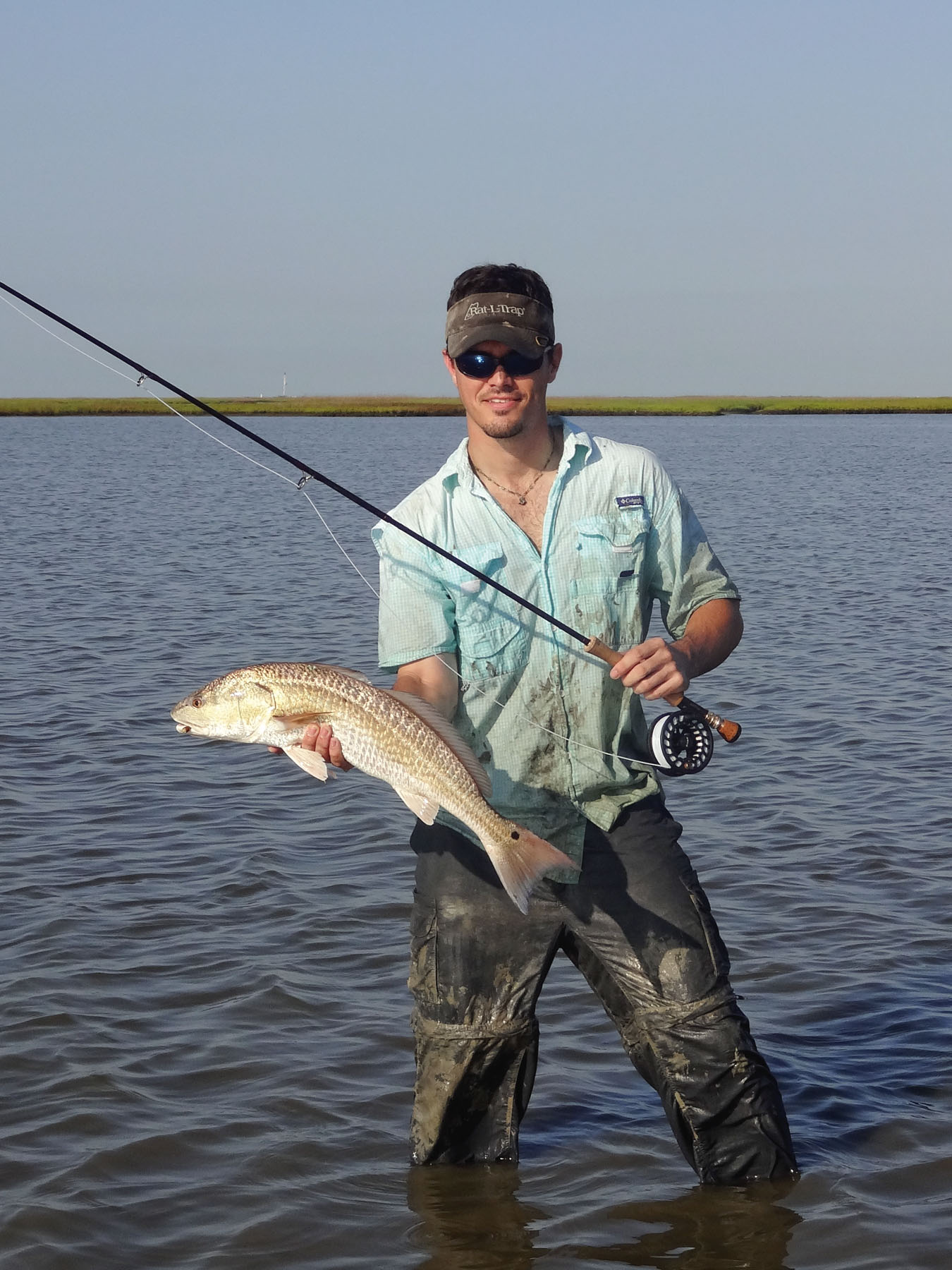 And one on the fly the day of the great mudscapade!
The latter half of July and early August were fun times for me in terms of coastal fishing. In the span of two weeks I made four trips, three of which came in one week alone. Each outing brought a different scenario, each creating different adventures.

On one trip, high tides had shrimp and, needless to say, fish too, pushed way back into the flooded marsh grass as well as completely hidden in open waters where redfish backs are usually exposed like tourists on a beach during the summer. On the positive side of things Cliff and I were able to do some worthy scouting into areas we don't usually paddle through. Between the two of us we actually completed a slam between us, me catching a red and a trout, Cliff landing a flounder.

My preference is having lower tides. As I wrote about last month, dragging the kayak across exposed bottom of back lakes might be just a bit too low, though. Just enough to skim the kayak across, about four to six inches at the lowest, is just about ideal. This depth makes for prime sight fishing conditions which is what I enjoy most.

During one of the low tide trips, Cliff and I chased many a redfish back around the marsh flats but weren't getting many hookups. We had started early in the morning and as the day progressed it seemed the fish were becoming quite lethargic, just barely crawling around. Much like my photo experience last month where I got down and dirty with the fish, I again removed myself from my kayak and simply observed reds coming out of a marsh drain, sans rod and lure. I did my best to slowly and inconspicuously creep to the mouth of the drain the fish were traveling through and eventually I was basically smack in the middle of a channel about six feet wide.

I literally just sat down in the water and waited. Sure enough every few minutes a redfish would cruise by. It was awesome watching nature work. I had a few redfish swim within inches of me and never pay me any mind. Unlike last month I didn't have a camera on me to document this.

On another trip, Cliff and I launched at about 2:00AM to give the night fishing a go. It was supposed to be a normal trip but neither of us could sleep, so what else were we supposed to do? Night fishing is fun and sorta spooky. Essentially it's the same as fishing during the day, you just rely more heavily on your hearing than your sight. We crept along the grasslines making as little sound with our paddling as possible, listening for reds crashing bait. I threw a Mann's Waker topwater bait to make some noise to help the fish locate my lure. I forget what Cliff was throwing but we both had moderate success. Lots still to learn in this night game.

I am looking forward to the approaching fall season. It's been a great year on the water so far, so I look for the fall season to continue the trend. I have been getting a great deal of new subscribers on my Youtube channel. I do have new video to edit but, right now my PC is out of commission, so hang in there guys and gals.

Reader emails have also continued to come in steadily. One reader asked about my opinion of the Hobie ProAngler 12 as his parents were looking to get a pair of them. To sum it up my response was basically, "Other than being a little heavy compared with others, they are super good quality kayaks, very fishable, and very stable."

Thanks everyone for the support and interest, keep your questions coming and don't forget to send me your kayaking fishing pics.