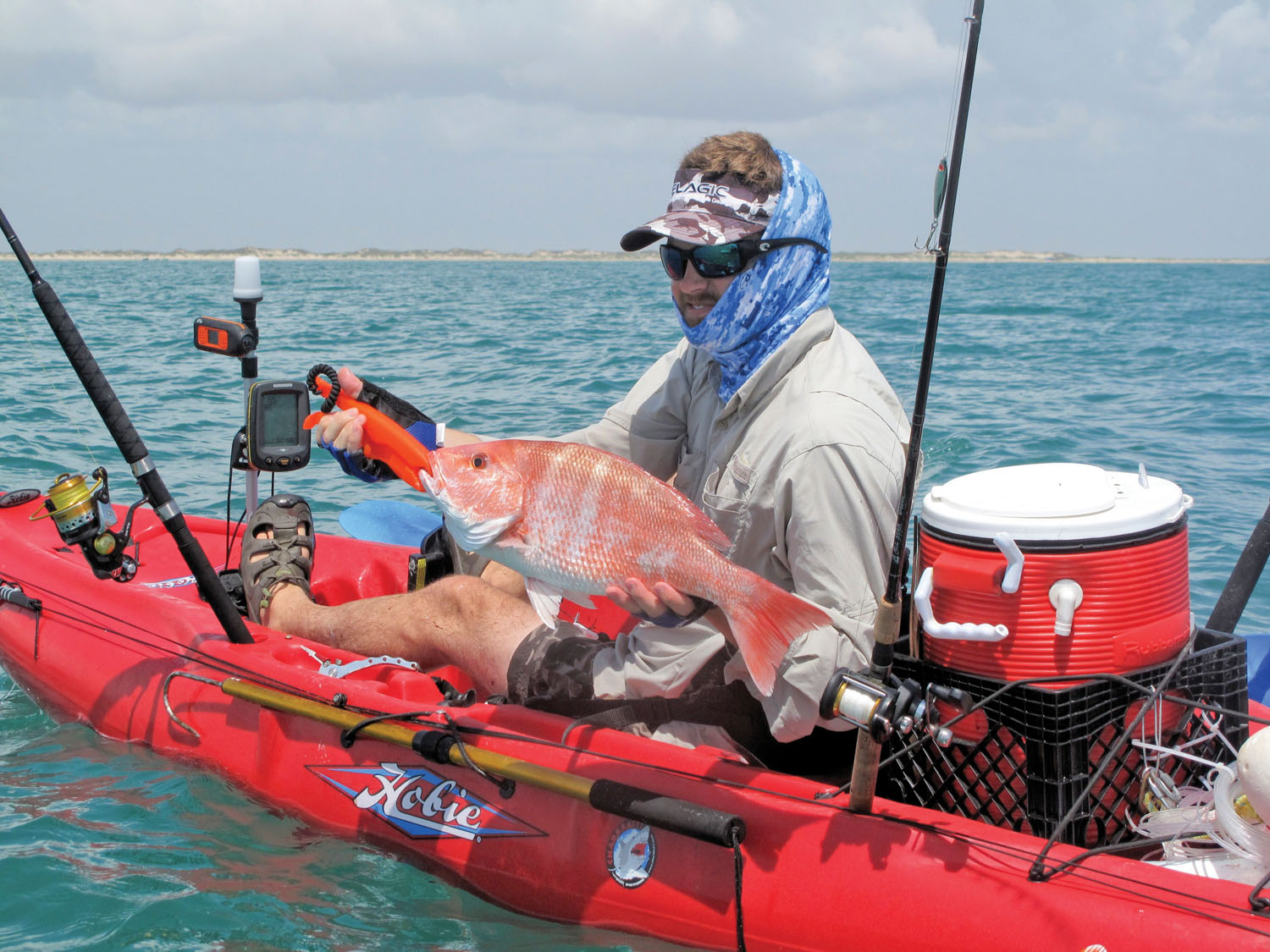 More than fifteen years now I have been fishing from kayaks, from the quietest backwaters of the Laguna Madre to chasing big game offshore, my experience includes a wide spectrum of venues and collection of plastic vessels. In addition to my kayak fishing endeavors, I was also greatly involved in the founding, organization and promotion of the incredibly popular Kayak Wars online fishing tournament.

The growth of paddle fishing here in Texas during the past decade has been nothing short of explosive. Once an oddity, one can hardly travel a coastal roadway without seeing kayaks strapped atop automobiles and protruding from beds of pickup trucks. Almost overnight kayak fishing became one of the fastest growing segments within the fishing category and a genuinely “cool” thing to do. But “cool” is only a tiny piece of the attraction.

First on the list of attractions is the basic affordability of a fishing kayak. Even on a modest budget, anglers can be fully equipped for a mere fraction of owning a bay boat. Forget about fuel bills. Maintenance is rarely, if ever, required. The stealth factor is also huge. On the flats, no other method comes close, not even wade fishing. Freedom to roam where other vessels cannot safely venture is yet another bonus. And finally; solitude and relaxation. Launch practically anywhere and enjoy the peaceful, unspoiled wonders of the natural world.

My best-ever speckled trout of thirty-one inches came while fishing from a kayak, and while I have spent many hours and days inshore, the greater part of my time and most serious fishing effort has been on the waters of the nearshore Gulf of Mexico. Back in the day, kayak anglers referred to it as “fishing beyond the breakers” – meaning that we actually paddle out to sea. Call it what you will, offshore kayak fishing is about the adrenalin rush. Beginning in late-March, the season opens whenever occasional calm days provide safe seas.

Waiting for calm seas, we often hit the jetties. Port Aransas and Packery channels provide plentiful sheepshead and beastly black drum. Limits of solid sheepies provide excellent table fare and limits of these surprisingly strong-fighting fish are easy to attain most days. As the sheepshead and drum action begins to wane in early-April, our focus turns to cobia, further offshore.

April and May are prime cobia months and brutes weighing more than 70-ponds can be encountered. A large cobia from the kayak is a prized catch in Texas, not to mention that cobia are a delicacy on the dinner table. Cobia can be caught using anything from cut bait to ribbonfish, and even live hardheads.

Special care must be exercised when landing and handling a cobia from the kayak as they are very energetic and powerful. Just because you have brought a large cobia alongside does not mean the fight is over – not by a long shot. There have been instances when freshly-gaffed cobia have pulled anglers out of their boats. Take heed and expect the unexpected!

Offshore kayak fishing always has and always will include an element of danger. Not only in terms of being adrift on the ocean in a tiny vessel, but likewise applicable to other large and dangerous species encountered. Texas has a couple dozen shark species commonly landed by kayak anglers.

While present year-round for the most part, summertime is shark central. Every shark, no matter its size, can pose a very real threat if not taken seriously. Most often, sharks will be encountered while targeting reef fish. It is quite common to be fighting a bragging-size red snapper and have a shark attack the easy target on your line.

Sharks are curious, opportunistic feeders and quick to take advantage of any chance at a free meal. While bottom fishing for snapper, many people hook into sharks of all sizes and must therefore be prepared to deal with them. The most common practice for a release (if the fish has not already bitten through the leader) is to tire the fish out and, when alongside the kayak, simply cut the line or leader as close to the hook as possible.

Sharks can often be encountered in packs and can be quickly encouraged into a frenzy. When being shadowed by a single shark, or even if a pack of sharks should appear, remain calm and keep your composure. They are not interested in you – but they will greedily accept your bait or take a bite of a fish you are reeling to the surface. Safety is key in any kayaking situation. Sometimes the best option is to vacate whatever structure you are fishing and find another.

Perhaps most highly-prized among beyond-the-breakers kayak anglers are the “smoker-class” king mackerel. So-named for their ability to “smoke” line from a reel. Despite enormous effort every summer from throngs of anglers aboard much larger vessels, some of the largest king mackerel in Texas have been landed by kayak anglers. In a single summer, kayaking pal Kevin Eager and I landed three kings that would have placed atop the CCA STAR Tournament’s kingfish division.

Incredible fighters, kings are known for exceptional aerial displays, sometimes rocketing skyward twenty-feet or more. When a true smoker-class fish hits a trolled lure or rigged ribbonfish, they can blaze a reel with such force you fear it will melt or explode. A delight to fight from the kayak, a large king mackerel describes perfectly the term “game fish” and, pound for pound, are rated very highly for their speed, strength and stamina.

Increasing numbers of kayak tournaments are organized each summer, with focus on kingfish. One such is the Bluewater Kayak Classic which I have been fortunate to win twice, back-to-back years, with smoker kings. While many people do and are legally entitled to harvest these fish, I encourage catch and release whenever possible. Though tasty, due to its longevity and feeding habits, king mackerel are reported to contain mercury levels that rank near the top of all game fish species. Releasing a king (when possible) is a great conservation strategy and also a great way to protect your health.

The possibilities are endless when you take to the water in a kayak. You are able to target virtually any species and kayak landings continue to run nothing short of impressive. Continued growth of the sport is virtually guaranteed as new kayaks and new kayak manufacturers continue to arrive on the scene. There is virtually a perfect-match kayak for everyone and every facet of angling. Whether novice or tournament-driven, you can find the kayak for your exact needs.

I have personally been a fan of Hobie kayaks since they first became involved in fishing kayaks and contributed so much to the sport. Particularly in the category of peddle-power, which appeals so greatly in offshore fishing, I consider Hobie an undisputed leader. Having paddled nearly every conceivable rig available today, I consider the Mirage Pro-Angler the safest and most capable for offshore applications.

Offshore fishing is a fast-growing segment of kayak fishing but not without considerable risks. This list of suggestions and precautions could save your life in the event of an unexpected dunking.

-Kayak with at least one buddy-boat, especially when venturing offshore.

-Seek professional instruction. Consider hiring a kayak fishing charter or fishing with an experienced kayak angler before heading out alone.

-Know your personal physical condition and limitations and always paddle and fish within them.

-Learn the capabilities and limitations of your equipment.

-Practicing the capsize-reentry drill is essential to safe kayaking, should an actual emergency event ever arise.

-Tethers should be used to attach your paddles and other gear.

-An EPIRB is a good investment and an essential piece of gear for offshore paddling.