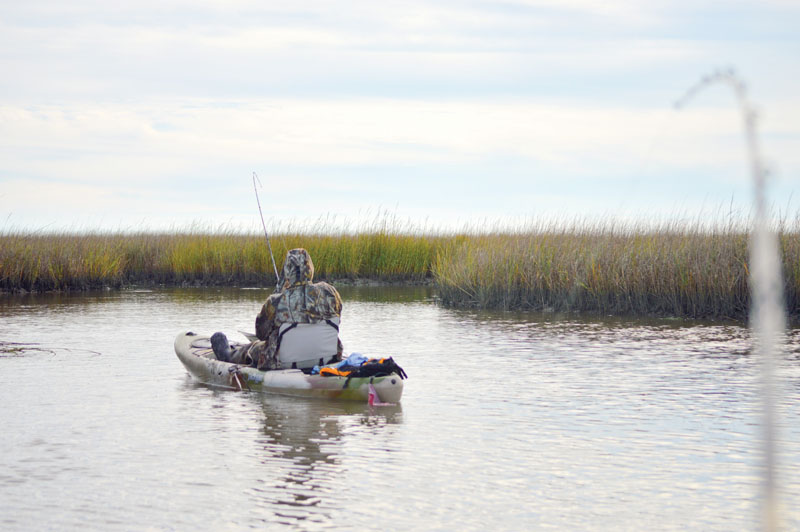 I know Christmas is still a few months away but the melody of Andy Williams' "It's the most wonderful time of the year" plays through my head when I hear the word October. That one little word is enough to bring a smile to my face and, rightfully so. I personally believe that it is the greatest month out of the year and for multiple reasons.

For starters, the Texas summer heat is gone and is replaced with fair and cooler weather. This makes kayak fishing much more enjoyable. The cooler temperatures allow anglers to spend more time on the water while being able to cover a great distance. Luckily, fishing at this time of the year is phenomenal; paddling miles across back marshes or open water is usually not necessary. A short paddle to the nearest marsh outflow can produce limits of fish and in a short period of time. I recall a trip I had made last October where I had all intentions on paddling up a bayou and fishing the mouth where it opened into the bay. I made it about 60 yards and saw one shrimp scurry across the top of the water, so I made a cast. I proceeded to catch a limit of trout and reds within one hour. If it was not for that one shrimp, I would have paddled over that whole school of fish. That is a prime example of how fishing is in October.

It is also the time of the year that all baitfish make their yearly migration to the gulf. Mullet, shad, crabs, and shrimp will gather in large masses and head south for the winter. Their annual journey though is treacherous; every predator for miles around will gather for the feast. Not only does a shrimp have to worry about falling prey to a hungry trout but just above the water's surface awaits a flock of greedy gulls. The screech of a hungry seagull will attract other birds and is a clear indication that fish are feeding under them.

Fishing a group of birds that are "working" can be fun, fast and furious. When fished properly, an angler can make 10 casts and have a limit of trout on a stringer. The key is to stay on the outer edge of the birds and cast just under them. If you can do this without spooking the birds away, they can be easily followed for a long period of time. Oftentimes boaters will crash directly into the school, pull a few fish out and then travel to the next group of birds; a cash and dash method of fishing. Kayakers do not have that luxury, unless you are looking for a good cardio workout. It is a fun experience to paddle from group to group and trying to catch as many fish as possible while the magic is still happening. Although, this is not a method I prefer.

When the fish are in a feeding frenzy, lure choice is not all that important. I tend to stray from lures with treble hooks, such as top waters, Rat-L-Traps, crankbaits etc. I am trying to get a fish off as quickly as possible so I can make another cast. I want to avoid treble hooks caught in my net, my fish, or even me. I typically stick to a 1/4 oz. jighead with a Norton Sand Eel Jr. The color usually does not matter but I prefer purple and green. Another reason why I like Norton lures is because they are rugged. One lure can withstand several trout before it is torn apart and needs to be replaced. I have not found any other soft plastics that can compare to being as tough.

Scattered across the open water the trout are doing their thing but that is only half the fun. I always found it amazing what the redfish are doing at this time of year. The bull reds are thick in the surf and are still spawning. Only mature redfish spawn so when you catch one, it is going to be a good one! It is always fun though to hang into a 40" redfish and let him drag you around in circles. You are never really in control until you have landed him in the kayak. Also, like every other fish during October, they are in large schools. So catching several bulls in a day and doubling up is common.

Back in the marsh and bayous you can find every other redfish that is not participating in their annual spawn. These fish know when the shrimp begin to migrate and know exactly where to be. They will gather up in small or large schools and move down a shoreline. They mostly gorge themselves on the thousands of shrimp leaving the estuaries but will devour anything in their path. Often times they can be heard crashing a shoreline before being seen. Chasing these schools of redfish is one of my favorite things to target. All you have to do is cast just on the outer edge of the school and hang on. Catching them is almost effortless but getting to witness these fish correlate always has intrigued me. These fish synchronize together and work as a team to benefit every one of them. Not just a few of them but hundreds of redfish will break into smaller groups and do their thing. It is truly an awesome occurrence that only happens once a year.

All in all, the month of October makes for a kayakers paradise. Every fish around is hungry and fattening up for winter, so the fishing is incredible. The weather is beyond perfect to be paddling in. I mean seriously, what is not to like? I wish every day could be this ideal, not just for the fishing but the kayaking too. One of these days I am going to be long gone and I am not sure what to expect afterwards. Some say streets paved with gold but that is not how I envision it. No, I will settle for fishing the brisk October days on Sabine Lake for all of eternity.