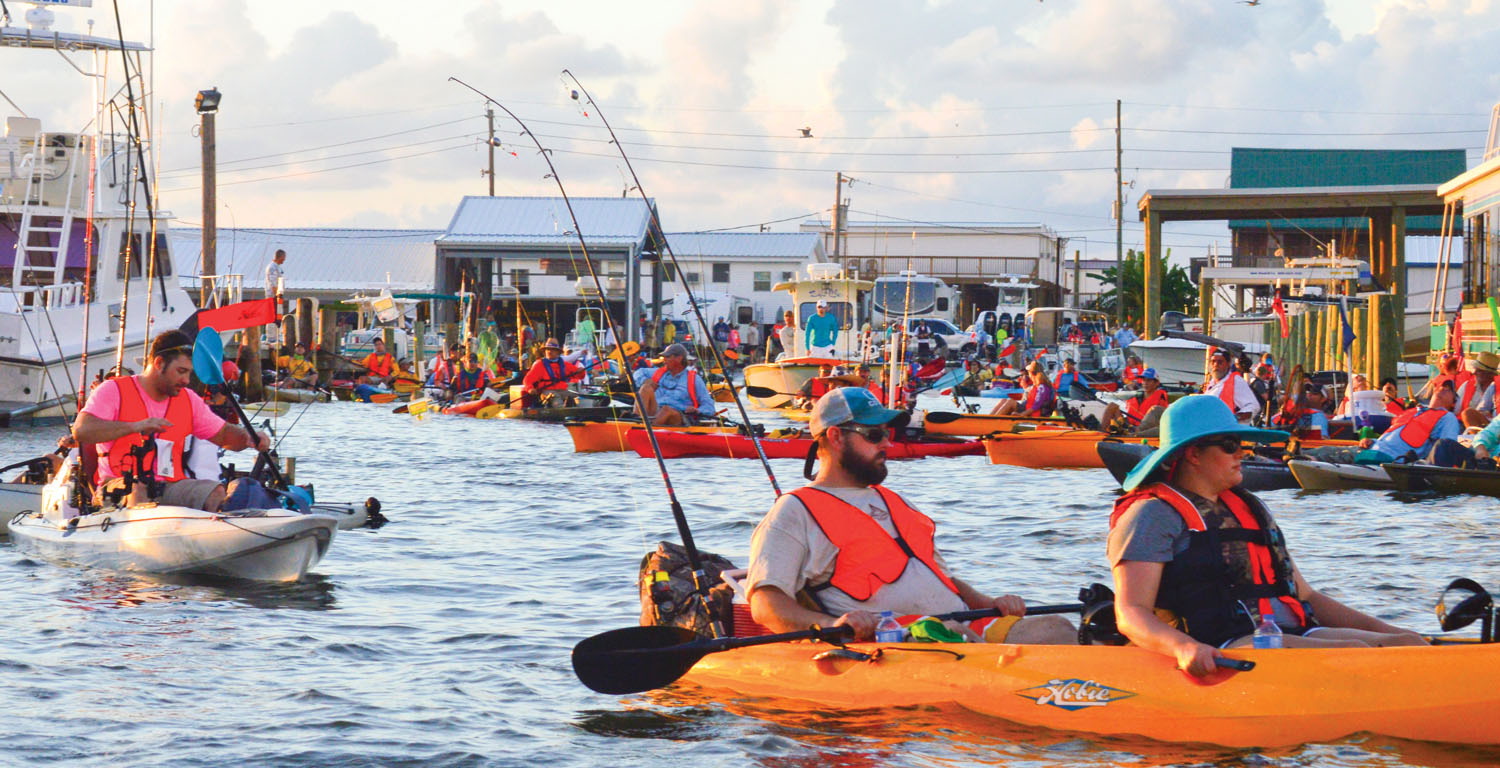 I would guess that most people have fished in a tournament or at least been to a tournament weigh-in. The Lone Star Kayak Series is the biggest kayak tournament we have here in Texas with over 100 anglers that show up to fish each event. In addition, there are a few other smaller, local tournaments that average 20-30 anglers and these are always a good time. Can you imagine going to the largest kayak tournament in the world and fishing against 800 other anglers?

Ride the Bull is the world's largest kayak fishing tournament and is based out of Grand Isle, Louisiana. Every year this event attracts a larger, record-breaking field of anglers. In 2015 they had more than 750 angler participants, from 23 states, some driving all the way across the country to compete in RTB. Tournament director, Rad Trascher, believes they could top 1000 kayak anglers in 2016. That's a lot of plastic!

So what are you fishing for in the RTB? You guessed it, Bull Reds! During this time of the year, bull reds come through Caminada Pass for their annual spawning run to the gulf and this makes catching them both easy and fun. The pass has long been known as an area to catch big reds year round so this makes the venue perfect for this tournament. There is plenty of room for all contestants to scatter about the pass and an abundance of fish to catch. What could be better?

The rules are pretty simple. You must fish from a paddle-craft, and apart from basic sportsmanship and signing a waiver, that's about it! You can go about catching a bull any way you like, just as long as it is on rod and reel. You are allowed to use live or dead bait, or if you prefer, you can use artificial lures. The contestant who weighs in the largest red wins, only stipulation is that it has to be a minimum of 27" before it can hit the scales. When that is the smallest fish you can enter, you know you are going to have a great time.

The RTB format includes several categories, all with cash prizes: individual, team, ladies, and juniors. The individual category is based on a single angler's heaviest fish and the top 10 win cash. There are also prize packs distributed. If you are coming to RTB with a group of friends you can form a team and the team that catches the most bull reds will win a prize. They have just about everyone covered that will give them an opportunity to win something.

A few buddies and I went to RTB-5 two years ago and I cannot even begin to tell you how awesome it was. The previous year, they had 488 kayaks on the water and had all intentions on breaking that record during RTB-5. When we arrived at the captains meeting, the tournament director handed us the last of 600 shirts! He went on to inform us that people they didn't even expect had been coming in steadily to register for the event.

The next morning we launched and got in the mix of all of the other kayakers. The tournament director was standing on a boat with a megaphone conducting the morning briefing in a sea of kayaks. He then told us that the final count was 733 paddlers, peddlers and paddle boarders! After telling us that we had once again broken the record, he blew a horn and a frenzy of kayaks took off to their hopeful honey holes.

My buddies and I stuck together for the most part and tried our best to spread out and escape the crowd. Once we got to where we wanted to fish we anchored and got our rods ready. I threw a mixture of cut mullet and cracked crab and then kicked back and waited for my rod to bend. The cool thing was in the lull periods I got to have conversations with other anglers that were near. I talked to local Louisiana guys and we swapped fishing lies about our home waters. I even met a few people from the east coast that drove down for the event, just to be a part of the world's largest kayak tournament.

An event like this is what I love about the kayak community. We all come together with the same camaraderie to make these things happen; we all want to make this happen as one. Even though I did not catch a big bull red that day does not mean that I did not have a good time. It was worth the trip down to Grande Isle to be a part of the world's largest kayak tournament. When on the water I never really got a good grasp on how many kayakers were around me. When I got on top of the bridge that crosses Caminada Pass is when the realization hit me of exactly how many kayaks were actually there! That aerial view is something that I will never forget.

Ride the Bull-7 is approaching and the expectations are even bigger than last year. The event will be held August 26-27 at Bridge Side Marina in Grand Isle, Louisiana. You can register at CalmWaterCharters.net and find other information on the site. I know we have a group of people going and I know a few others that will be there to represent Texas. My kayak is ready and it's time to saddle up, I'm going to Ride the Bull!