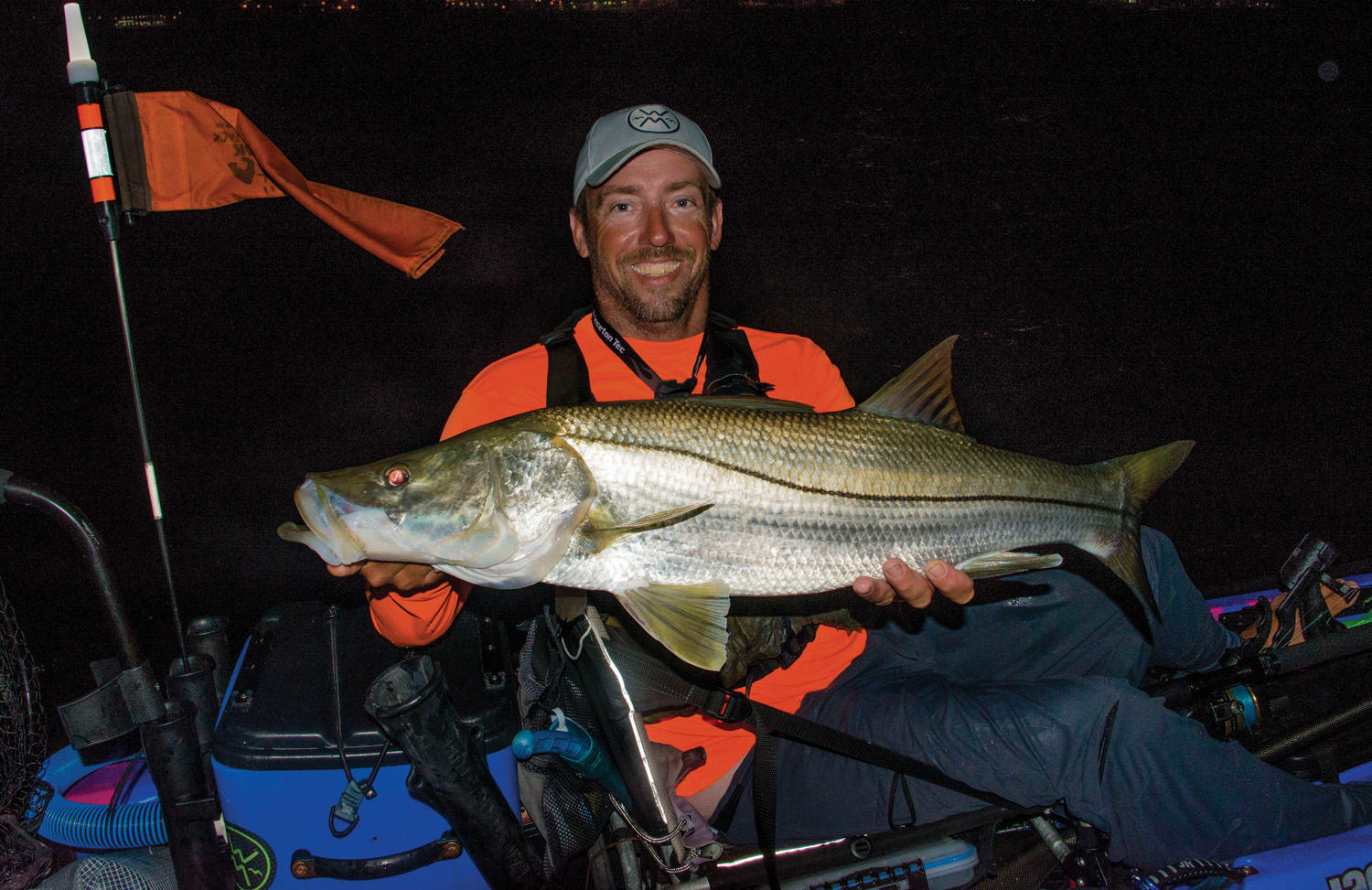 Have you ever had an opportunity arise so suddenly and so inviting that you impulsively say, "I'm in!" before even giving it a second thought?

In March of this year I received such an invitation via Facebook. It was being called Snooktopia and the name pretty much says everything an angler needs to know. Bart Swab, who is a member of the Jackson Kayak Fishing Team, invited me and several other kayak anglers to join him on his annual trip. Bart grew up in southern Florida fishing for big snook and since he currently resides in St. Augustine, he makes a trip south each summer to his old stomping grounds.

Reading Bart’s post and exchanging a few messages was all it took. Within 30-minutes I had a campsite booked and had HR on the phone to request time off from my job. I was going to South Florida to chase snook and I could not have been more excited.

Reality set in as the days ticked away. I began to realize that I knew absolutely nothing about South Florida, much less snook fishing. However, a weekend of camping, fishing, and great company, was ahead of me and I knew it was bound to be a great time.

Snooktopia was going to take place at Jonathan Dickinson State Park and we were going to be fishing on the Loxahatchee River. Checking Google Maps was when I realized that it was going to be a 17-hour drive, and that in itself would consume two days of fishing time. Back to planning mode, I considered my options and decided to expand my original itinerary – take the whole week off and leave straight from the workplace on Thursday before Snooktopia. With 10-days off I figured to just head south and wing it. Snooktopia would be the second part of the trip and the first half I would spend in the Everglades. Little did I know leaving Texas, I was about to embark on what would become a trip of a lifetime.

I arrived at the State Park a little after midday Wednesday. I had already been fishing further south for the six days and I was enjoying the change of scenery. With camp in order, I made a loop around the park to check things out. Locating the boat ramp and other attractions, I headed back to camp and ran into Bart and his buddy Ben. I helped them make camp and we kicked back to discuss strategy.

At daylight, we gathered gear and headed to the ramp. This is when I realized I was not trout fishing in Texas. Bart’s and Ben’s tackle included three HEAVY rods apiece with BIG lures – as in full-size Spooks, 8-inch swimbaits, and kingfish-size Rapala jerkbaits. I looked at Bart and asked if he was serious. “Dead serious,” was his deadpan reply. Digging through my bags and truck I came up with a few larger swimbaits and one full-size topwater – enough to get me through the morning.

Not too far down the Loxahatchee, I looked down to see two mid-thirty-inch snook cruising past me. I knew instantly what Bart meant when he said, “dead serious.” Pushing further downriver, the cruising snook became more numerous, including several schools. I never got any to take a lure but seeing them was an unforgettable sight. Every fish in the school was without a doubt mid-30 range and some could have been 40s.

Around noon we headed back for a bite of lunch and regroup for the evening. Bart came up with a plan to fish a honeyhole he calls Land of the Giants. A dilemma arose in catching bait and keeping it alive all night. A meeting of the minds suggested that we use my skiff as a mothership, keep the mullet in my livewell, and paddle back and forth for baits as needed. We quickly obtained twenty-five mullet about ten to fourteen inches and headed out to the spot. Not fully understanding what I was facing, I decided to use my Lexa 400 with 80-pound fluorocarbon leader and heavy-duty circle hook.

Bart rigged the largest mullet from the livewell for me saying, “This is the size they like!” I eagerly tossed it out and the wait began. Just as the sun went down and the tide changed, Bart and Ben began hooking-up, jumping two tarpon and two very nice snook shaking the hook alongside the kayaks.

I felt my line drawing tight and knew it had to be a good fish to eat that big mullet. I gave it a few seconds and cranked down. This fish nearly pulled the rod out of my hands and there was no stopping her. I tightened the drag as tight as it would go and she rose in a headshaking explosion before diving again. Within seconds she cut the line on nearby pilings. It was a quick ten seconds but the power of that fish had was unreal. Bart laughed. “That’s why we call it land of the giants…that looked like a 40-plus!”

Determined, and knowing what I was up against, I tossed another mullet and waited, again. In the meantime, Bart landed a pair of snook, 35- and 37-inches, while Ben jumped another tarpon and broke off another snook.

My line began to move again. I waited for it tighten, and with a fierce grip on the rod, reared back for the fight. Like the first fish, she took off peeling drag toward the pilings. Wiser now, I managed to turn her from the obstructions and landed my first big snook. A formidable mid-30 specimen of which I was very proud.

Over a four-hour stretch, we used up all our mullet – jumping four tarpon and landing six snook, one a bit longer than 40-inches. Typical fishing story; having left the memory card in my laptop, the only photos we captured that epic night were low-quality cell phone images. I vowed not to make that mistake again.

The Land of the Giants was not as good to us the next evening, but at least I had my camera. We landed two snook and lost four more alongside the kayaks. We also jumped a pair of tarpon and landed a large nurse shark. Another fun night of fishing that I will never forget.

Bright and early next morning, I began packing for the trip back to Texas. I had fished nine days in South Florida and had an absolute blast. I arrived home with great memories of huge snook and their incredible power – a lifetime trip, for sure.

Next month I will share my adventures of six days in the Everglades that preceded my introduction to Snooktopia.