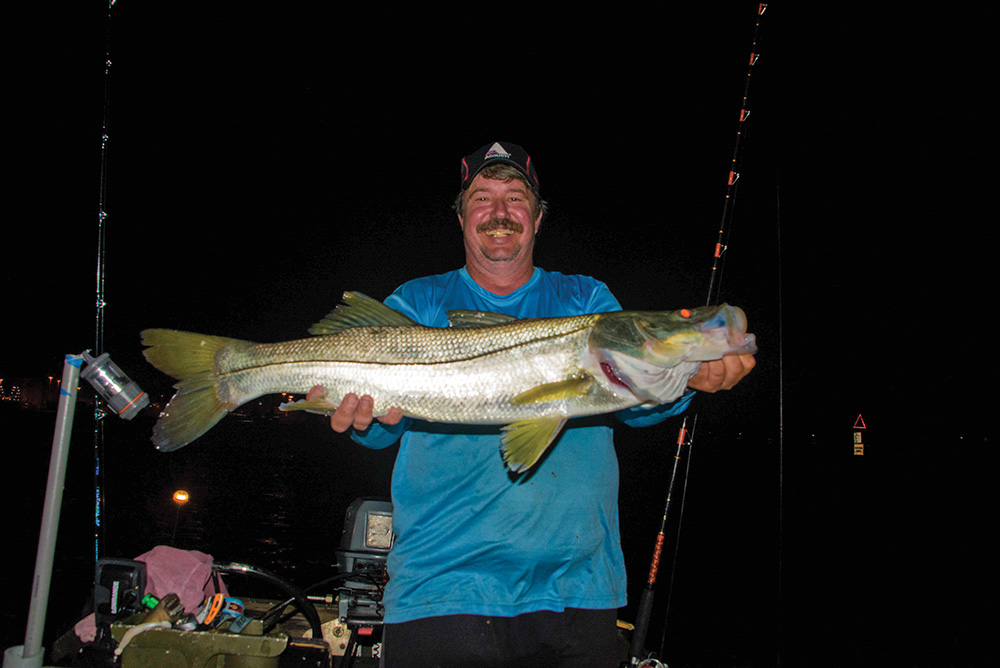 Picking up where I left off last month; I’d finally made it down to Johnathan Dickenson State Park and put in a full day of fishing. I was on the water from sunup to sundown and managed a few small snook on topwaters and a decent one on my glide bait. The first day was in the books and I was champing at the bit to hit it again the next day.

I passed a restless night even though dog tired from a full first day on the water. We were all up before daylight but it was not because of the alarms we had set before going to bed. An early morning storm had moved through the area and the lightning was hitting very close to camp. Most of us chose to seek refuge in our vehicles; that’s how close it was. Around 0800 the lightning stopped flashing and I decided to ease out for a few hours. It was mostly a repeat from the previous morning and only produced a few small fish.

Midday, we all headed over to a local restaurant to meet up and visit with everyone that had gathered for the event. We swapped fishing stories from the past few days and then devised a plan for that evening. Half the group decided to fish pier lights while Bart, Ben and I were anxious to get some live bait and head to another area. As evening was approaching we started our paddle out to the spot and along a rock wall I spotted a tail. Thinking it was probably a sheepshead I didn’t pay much attention until I noticed a yellow-green tint. I realized it was a snook and yelled at Bart, who was closer to it at the time.

All three of us scrambled to grab a rod and I managed to make the first cast. I threw my Keitech swimbait just in front of the fish and set the hook as soon as I felt the thump. As quickly as I reared back on the rod I was dodging the lure – not quite quick enough.

We continued our paddle across a cut and anchored just off the bulkhead. While I was getting my live-bait rod ready a small group of large snook came barreling down the wall, chasing bait. I have NEVER heard or seen anything as aggressive as those snook. It sounded like bowling balls were falling from the sky!

I fumbled for any rod I could get my hands on but they were gone before I could make a cast. After the commotion passed we got our lines out and the wait began. Long story short - we decided to paddle back to camp at 0100 – the action up to that point was only a few half-hearted bites on the live baits. However, where I had missed the tailing snook earlier, I landed one on topwater pretty close to the same area. It was a much better fish than the ones I had landed that morning.

We made it back to camp without incident and it was lights out with hopes to give it one more solid effort in the morning. Sleeping late was easy and most of the group was up and around by 0900. That’s when we learned the guys who fished the lights had enjoyed some success.

Bart and Ben decided to pack up and head back home; that had been their fourth night of fishing well into the morning hours and home was calling. I had a few things that I needed to take care of that day that required internet service so I headed to town. My plan was to get on the water later in the afternoon and hit the pier lights as darkness approached.

No sooner than I sat down, Bart called and said his brother was looking for someone to fish with that night. I figured since I was by myself and fishing unknown waters, my best and safest bet was to join Donald. I gave him a shout and planned to meet him at the ramp. He had just recently purchased a boat and was anxious to give it a baptism by snook. We launched and spent the rest of the afternoon trying to catch mullet for the night ahead.

We got to our spot right at dark, anchored up and tossed out a couple of baits. It wasn’t long and I had my first bite. The drag screamed on the hookset but only for a second. The hook didn’t hold.

No worries. I baited up again to wait for another bite. Thirty minutes passed and I began to feel my mullet getting nervous, and then a solid thump. I gave it a few more seconds this time, and when I set the hook the fight was on. I got a few good runs out of her and she hit the measuring stick at just under 32 inches – a perfect slot snook!

Donald and I high-fived and celebrated finally getting a good snook in the boat, and on the last day, at that.

We continued fishing and it was soon Donald’s turn. Setting the hook, we knew instantly he had a better snook on the line. She made a few good runs and gave a spectacular headshake at the boat but we still managed to land her. Donald’s snook measured 38 inches. We made a quick photo and released her back into the water. As the night went on we missed a handful of other fish and around midnight, I hooked into a four-foot barracuda. We took that as a sign to call it a night. Finally, on the final night, we accomplished what we had come for!

The next morning I packed up and headed to St. Augustine to meet Bart for one more round of fishing. He is a kayak guide there and told me the tarpon were in the land cut. I arrived and we made a few drifts until it got dark, and never found any tarpon. We did however pick up a few nice bull reds. Meeting up with Bart proved to be a really cool pitstop and a perfect last ditch fishing effort. We loaded up and I gave him thanks for the invitation and all the hospitality he and his brother have extended to me. Without a doubt, they are great people, great fishermen, and I am thankful to have met them.

Once again, my trip was unbelievable and I cannot wait until next year. Hopefully everything will line up perfectly for me and I will be able to get back down that way. Until then, I’ll be dreaming about pitching lures into the mangroves and the scream of my drag being tested by big snook!