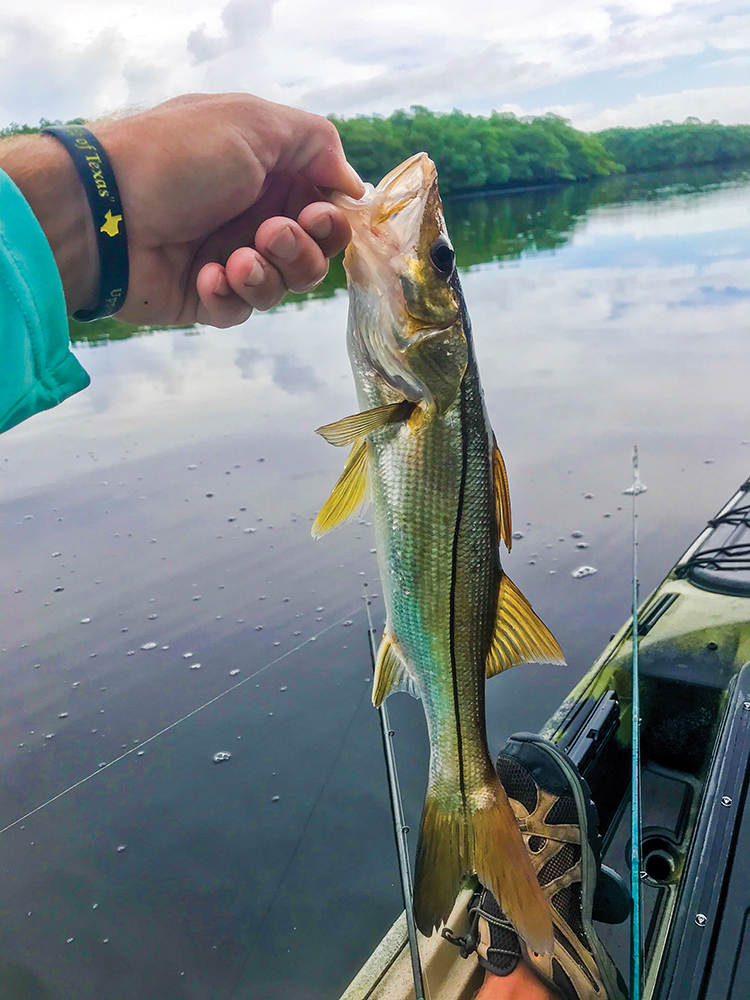 I mentioned being on a two week road trip in my last article that I wrote from my hotel in Tennessee. That was at the halfway point with my ultimate destination being Jupiter, Florida. This is where Snooktopia 2018 was going to take place and I couldn’t have been more excited to get down there. Concluding my safety seminars I repacked all my gear and was soon southbound and down.

Another 12-hour drive delivered me to Jonathan Dickenson State Park. I checked in at the front office and when I arrived at the campsites, I was the only one there. I decided to call Bart to see where they were and to my surprise they were still out fishing. I then started to set up camp and figured I would hang out, relax, and wait for them to come back in. It was nice to finally unwind and look at something besides the dotted white lines on the highway.

It wasn’t too much longer until Bart, Ben and a few other guys showed up at the camp. They welcomed me and we caught up a little bit since it had been a year since we’d been together. On top of the welcoming, they gave me a fishing report and the snook were indeed there. Being near midnight at this point, we decided to call it a night and pursue several fishing plans in the morning. Being that it was my first day there, I was not going to miss the topwater bite at daylight. Bart and Ben were going to sleep late as they’d just put in a very long day on the water.

My alarm came early that morning but I didn’t hesitate to jump up and get ready. I headed down to the launch, hastily threw my kayak in the water and started fishing. It was a beautiful, still morning and I couldn’t be any happier to be paddling through the mangrove forest. On top of that, I had the Loxahatchee River to myself and the first shot at any potential fish.

With this being my second time fishing this area I was much better prepared than on my first visit last year. I had three rods rigged up, all with different presentations, and with reasoning behind it. I had a Bone Super Spook tied on for covering lots of water; a 4” Keitech swimbait to pitch under docks and mangrove limbs; and my third rod with an 8-inch River2Sea glidebait in hopes of enticing a large, picky snook.

I began with the Spook along the mangroves and it started off fairly slowly. After making a few bends in the river I began getting blowups. Snook hold nothing back when it comes to hitting a topwater; it’s usually violent. I continued on when I heard and saw a blow-up in the back pocket of a mangrove patch. I quickly, but quietly, headed that way and to get into casting range. I aired my Spook across the flat and noticed a wake following my lure. Trying not to panic, I kept the same cadence in hopes that she would strike. But she turned away after following it several feet. However, I did get a glimpse of her, without a doubt she was the one I had driven twelve hours for!

I continued on and eventually started to put a few small Snook in the kayak. I had several decent blow-ups but could not hook any of the bigger fish, only the small ones. No worries though, I at least knew there were some fish hanging around. Around 9:00 a.m. Bart and the rest of the Snooktopia crew made their way to me. They were planning to fish their way downriver and make the day out of it. It didn’t take much convincing for me to join.

As we headed down, we split sides of the river in hopes that one of us would pull a snook off one of the docks. To our mutual surprise nobody landed a snook in the area. Once the river opened up near the Atlantic we started to spread out. I decided it was time to try the 8-inch glidebait. Having enjoyed no success along the piers I switched focus to the bulkheads. It didn’t take long until I felt a fish whack that big bait. A decent fight and a few good headshakes, I landed the frisky 25-incher. Too bad that she slipped from my grasp before I could snap a photo. Oh well.

Getting closer to our takeout point we decided to stop at a sandbar for a short break. It felt good to get out and stretch since I been in the kayak all day. While there, I caught up with a few of the guys that I met last year and got to meet a few new people that decided to come down as well. We all talked about how the day had been going and there were a few snook caught but no big ones. All agreed it had been a beautiful day and a few fish hitting the kayaks made it even better.

It was time to formulate the day’s final fishing strategy. Half the crew decided to head straight back to camp while I elected to fish my way back. Bart, his brother Don, and Ben decided they were going to start catching bait for night fishing. We split ways and I was on my own with the glide bait. Liking what I saw of the sandbar’s structure possibilities we’d taken our break on, I began to probe the deep drop-off that ran along a boat channel.

Several hours of effort brought me another solid strike but I was too late with the hookset and did not connect. With that I grabbed a bite to eat and went back to camp. After talking to Bart the next morning I learned they’d had their chances the night before. Bart had one break him off and Ben had one straighten his hook. Just goes to show you that big snook are powerful.

Day-1 of Snooktopia 2018 was in the books and I had a few more ahead to land a monster snook. It was clear that snook were present and hopes were running high for the next day’s fishing.