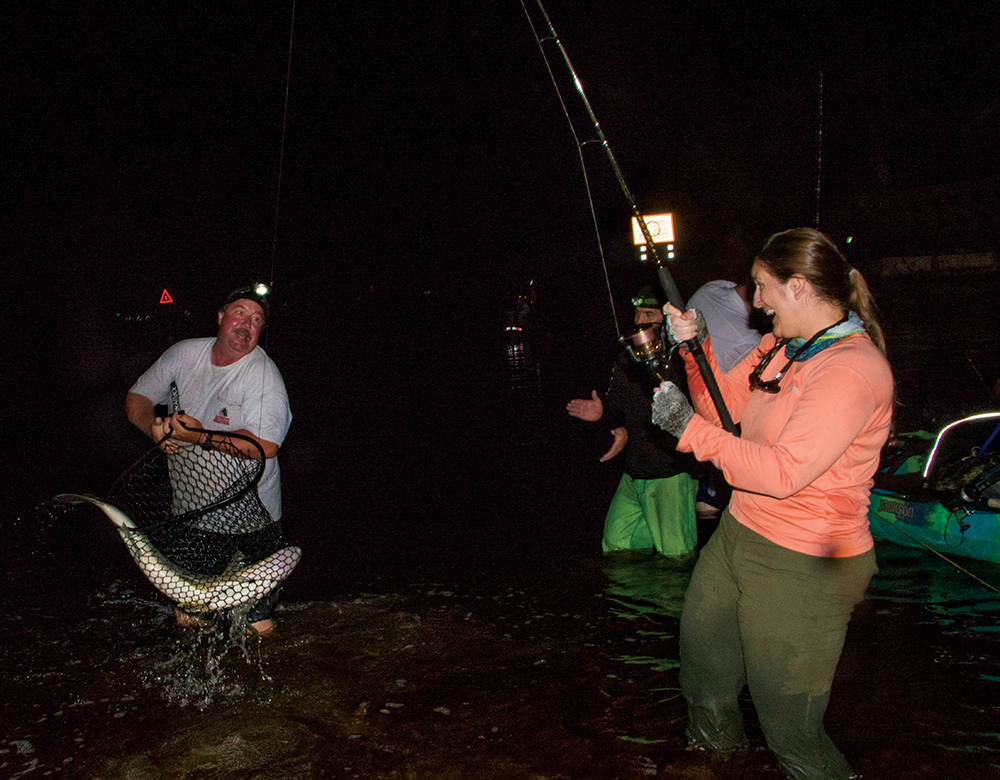 Continuing from last month --- I have already been in South Florida fishing for snook several days. The fishing has been incredible thus far with some very nice fish landed, including a few that hit the forty-inch mark. We had a smaller group the first couple of days but more people began rolling into camp on Thursday evening.

Friday morning came early and it was tough to get out of bed. However, knowing what might be in store, I grabbed a cup of coffee and headed down to the river. I was greeted by another wonderfully calm morning and some others of our crew were already busy catching bait. As soon as we were satisfied that we had enough bait it was time to put a game plan together – who would fish with who and which direction everybody wanted to explore. Bart and I were set on heading to the same corner where the mangroves met a bulkhead. Bart had an absolute giant break his line there the day before, and we were anxious to see if it was still hanging around.

We made our way across the channel accompanied by James and Jonas. Bart and I headed directly to the corner, as we were paddling up we noticed a commotion deep in the mangroves. I staked out at the edge of casting distance from the mangroves and stood up to wait for a fish to swim out. Fifteen painstaking minutes passed and I spotted one easing out. I pitched my mullet in front of the fish and it just swam right past. I sat there another hour and the same scene played over and over; never could get any of them to bite. I moved on and figured I would come back in a few hours and try it again.

As I was making my way out Jonas landed a nice lower-30s snook casting at a dock. At least they were eating over there!

We continued on and the rest of the day passed slowly. The sun started getting lower and we reconvened on the same flat to replenish our bait supply for the coming night. A plan was hatched to spread out along the area that had produced for us the evening before.

The tide was going out as we got settled into our places and we knew the bite wouldn’t likely turn on until it switched. We landed a handful of decent snook and lost a few while waiting for the tide. The downtime was passed with lively conversation of prior Snooktopia trips and other fishing stories. It was very enjoyable just being out there with a friendly group of likeminded people.

Gary, who was sitting in the middle, brought up how badly he wanted to beat his personal best snook, which at the time was a thirty-four. “Just wait for the tide to change and it should be easy to beat that one!” Bart yelled out. Right around 10:00 PM the tide finally started to change direction and our attention shifted from conversation to the fishing at hand.

Like clockwork, rods started to bend and everybody became busy reeling in mid- to upper-30s snook. At one point the action got so heavy that we could hear and see snook blowing up our free-lined mullet and someone would call out, “Whose is it?” Everyone would reel in anxiously until someone would yell, “Mine!”

By around midnight our group had landed a dozen snook with the largest measuring a bit over forty inches. Everybody except Gary. We all began to quiz him about his setup and he mentioned he was running straight braid right down to the hook. Bart and James went immediately into guide mode and rigged him with a 60-pound fluorocarbon leader. Gary’s dry spell ended on his second cast with a solid snook. We landed her and he was elated to break his old record with a beautiful forty-incher. We made photos and let her swim away with several rounds of high-fives and many jabs about his failure to use a leader the rest of the night. We ran out of mullet at 2:00 AM and decided to call it a night with the snook still biting.

Everybody agreed that sleeping late would be a good idea, given the excellent night we’d just put in and the number of great snook that had been landed. We planned a group lunch and it was a good time meeting some of new people. As the conversations went on, it seemed that everyone would be happy to skip the afternoon and prepare for what we all hoped would be another excellent evening. We met on the same flat as the sun was going down to gather bait and one final hoorah.

As dark came on we moved into position with a pair of Snooktopia first-timers joining us. Shawn and his sister-in-law, Nikki, had finally managed to mesh their busy schedules and were very excited. Shawn was looking to catch “any larger snook” while Nikki had never caught one. Knowing how things had been, both of these tasks seemed very doable. Donald and I hung back to conserve mullet until the tide changed but insisted Nikki and Shawn should be front and center, soaking a bait.

An hour passed with plenty of conversation. It was slow until Nikki’s line began ripping through the water. We coached her to keep the line tight and reel when she could gather line. She brought her close and when we got her in the net, Nikki was literally  screaming and jumping up and down in the water. I honestly do not believe I have ever seen anyone as excited to land a fish, and her celebrating made it all the better. Not only had she landed her very first snook, it measured forty inches, and that is an amazing feat in itself. We got plenty of pictures and got the fish revived and released – which more than put the icing on the cake.

The tide finally changed and the bite came alive. Nikki continued reeling them in; landing a total of six, I believe. The bite was not as fast-paced as the night before but it was steady. Around 1:00 AM Aaron hung into a big fish and we all knew it was a good one. Shawn hung into one at the same time making it double. Aaron’s fish measured a whopping forty-two inches and the largest of Snooktopia 2019. Shawn’s measured a solid thirty-six. The bite played out around 4:00 AM and everybody agreed it was time to call it a night. I gave them all my goodbyes and best wishes, promising I would return in 2020.

Once it was all said and done, the group had landed eight forty-class snook with a couple longer. Even though this was our best year by far, those fish didn’t come easily. I spent forty-five hours on the water during three days of fishing. It was a long three days but it was worth every minute. I was staring straight into a fifteen hour drive but, again, it was worth every minute and I wouldn’t change any of it it for anything.

The opportunity to catch giant snook is always worth the effort but, as I have always said, catching fish is simply a bonus. Between the people I have met, the places I have seen and the skills I have learned, are things I will carry the rest of my life. Until next year I will be daydreaming about sitting on a flat, cutting up with my friends, and waiting for the tide to turn.