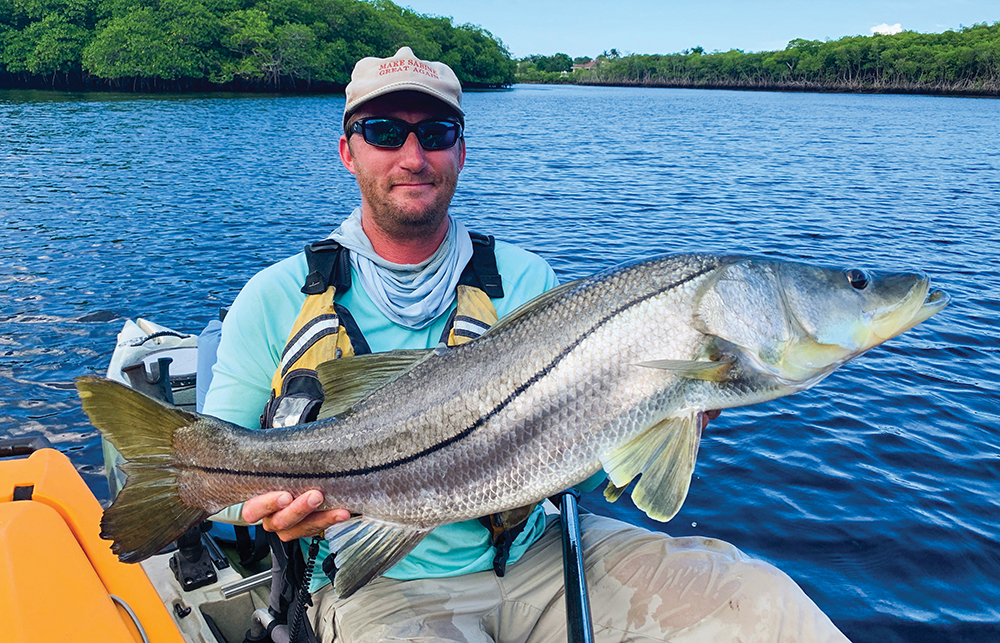 I believe it fair to say 2020 has been quite unique and very challenging. Travel bans have created havoc for many folks this summer, me included. No worries though, fishing trips can be rescheduled and there are plenty other destinations we can reach without flying. Lucky for me, my annual snook fishing trip to southern Florida remained on my calendar and I was eager for the road trip.

I arrived at Jonathan Dickenson State Park after a seventeen hour drive and was greeted with the familiar surroundings and excitement as years past. I unloaded my truck and headed straight for the Loxahatchee River. I only had a few hours before sunset but figured that I would stay until dark and give it an honest effort. Having never been upriver, I decided to head that way and see what it may be holding.

I threw a topwater all afternoon along the mangrove-lined shore and never received so much as a single blowup. With darkness coming on I decided to head back to camp and relax after the long day of driving. I got on the phone with a friend that lives in the area and he said fishing has been tough and catching live bait has been tougher. That being said, I figured I would just stick to the river in the morning and then venture out closer to the inlet around midday.

The next morning I got up at daylight, grabbed a cup of coffee and headed to the river. This time I headed down and fished the areas that I am more familiar with. I made it around a few bends and become slightly discouraged by the lack of action. Rounding the next bend I noticed several small tarpon rolling in the current. I made dozens of casts over a thirty minute period with no luck but they really were a beautiful sight to see.

While casting to the tarpon I had a school of about ten large snook show up right alongside the kayak and took that as a good sign. The rest of the morning was spent standing in the kayak, hoping for a sight-cast shot at snook making their way along the mangroves. I never got a strike but seeing at least forty or more told me they were definitely using that part of the river.

I got off the water around lunch time and decided to take a break from the heat. While cooling off, I was scrolling through the Snooktopia Facebook page and noticed a new post. David Naumann, who lives in the area, was asking if anyone had arrived yet and wanted to fish. I sent him a message and he obliged to meet up and hit the water. After discussing where we might fish, I fell back to the Number 1 Rule – Never leave fish to find fish. So we decided to head back to the river for the afternoon.

We launched and made our way downriver, working opposite shorelines. The first bend has a cut that leads to a secondary channel and I had just explained to Dave that this was where I had caught my biggest snook on a lure. I tossed my topwater across the mouth of the cut and, working it toward the center of the opening, I received a surface explosion more powerful than any I had ever witnessed. So powerful that it startled me and, needless to say, there was no need to set the hook. I instantly knew that I was connected to a giant fish and that I needed to make sure she didn’t break me off in the mangroves. It took about fifteen minutes to bring her alongside the kayak and into my hands!

I carefully removed the plug and nervously tried to position her in my lap for a picture. I was trying to be delicate with her, all while trying to maintain a firm grasp, which seemed difficult to do with such a large fish. We got a few pictures and put a tape on her for a measurement. She went 42-inches and Dave estimated the weight to be in the 25-30 lb. range. A true trophy of a snook!

I got her back in the water to be revived and watched her disappear into the stained depths of the Loxahatchee. I was on cloud nine. Dave and I laughed and reminisced every detail of what had just happened. I am thankful he was there to get a good photo and assist with the measurement and reviving before releasing her.

This is my fourth year of chasing my snook dreams in Florida and this is by far my best fish of all the landings I have accomplished. I have seen several snook of this caliber swimming around but getting one to eat always seems to be a challenge. Also, catching a fish like this on artificial is a complete different accomplishment in itself. Knowing what I have done, I believe I will be getting a replica of her made to commemorate the event.

At this point, I had set the bar very high for the other anglers coming down to join our annual Snooktopia. Naturally, excitement and expectations of all were running at peak levels as the photos were shared. Knowing that they were available and catchable gave everybody an added jolt of motivation. Fishing had started slow on this trip but one good fish can certainly turn things around!