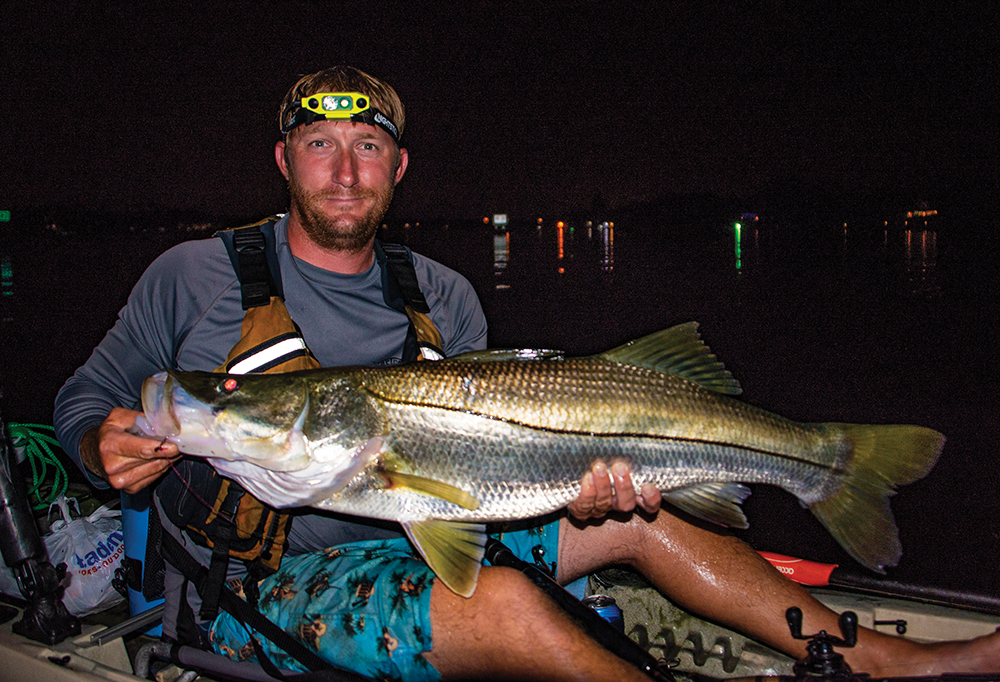 This is why I make the 18-hour trek to Florida every summer.

Picking up from last month’s article, I again made my annual journey to southern Florida for the get together we call Snooktopia. The first few days on the water were tough with only one bite. Luckily for me, that single bite produced my career-best 42-inch snook. Topping it off was that she came on a topwater; an explosion I will never forget!

The rest of the Snooktopia crew began showing up mid-week and, as always, they were eager to get on the water. My buddy Chuck decided to drive over from New Orleans with high hopes to land his first snook. We hit the river right at daylight and fished downstream as we typically do. It was another slow morning but at least my buddy got to see a few good snook swimming around, which boosted his confidence.

Getting off the water that afternoon we began asking around to learn if anyone in the group had been able to find and catch mullet for our evening fishing. The consensus was that cast netting bait had been difficult, even for the locals. We quickly hatched a backup plan and headed for the nearest tackle store. Sabiki rigs and dead shrimp, we hoped, would provide pinfish or croaker…anything live and wiggling would be better than nothing. The next stop was the Juno Beach Pier and after a few hours we had an assortment of baits, plenty to get us through the night.

With night coming on we paddled to an area that was new to me but heard there were fish to be caught once the tide changed. Chuck and I eased up a long channel that bottlenecked at a small bridge. We anchored and eagerly put baits in the water. The first hour was dull and passed slowly as we waited for the tide to change. Chuck had a quick run but the fish came undone when he tried to set the hook. Not long after I got a run with better fortune than my partner. I landed a 32-inch snook that we released after a few quick photos. The next few hours were slow and we called it quits around 0300.

Morning came and the crew eventually all rolled out. Given the nature of the fishing we’d been experiencing, everyone agreed that our best chance was to find more bait and it was off to the tackle shop for another pound of shrimp and then to the pier. Even that was slow, but luckily, a few tosses of the cast net gave us a handful of sand perch that we hoped might make better snook bait than the pinfish of the night before.

Launching our kayaks, we ran into Bart and several others who shared a method we hadn’t tried – paddling slowly and trolling free-lined baits behind the kayak. Hey, when in Rome!

It didn’t take too long and we heard someone yelling, “Fish On.” Bart’s brother, Donald, accompanied by his daughter and grandson, were fishing nearby and had the first snook of the night on the line. We prayed it was an omen of good things to come.

Action was sporadic throughout the night, most of the group getting bites and landing a few fish, everyone but me. I knew my time couldn’t be far off, but when?

I felt my rod tug me backwards and then the sound of line being pulled from the reel. I quickly tightened the drag and the fight was on!

After about 10 minutes I finally got her beside the kayak and into my lap. Some of the others paddled over to view my catch, which was lucky as I had somebody to pass the camera to for a better photo than my usual selfie. Our best guess at her length was 38-inches, shy of the coveted 40 mark, but still a great fish that I was very happy to land. We again made some quick photos and gently sent her back on her way. The tide was slacking and I decided to head back in at 0200.

Morning came all too early as I decided to pack my stuff and make an early return home. An 18 hour drive takes a toll on a person and figured I could use the extra day to get some rest before heading to work on Monday. Before leaving though, I did go meet the group for lunch, as we always do, at the local restaurant. It was a great time of rehashing the week’s events and catches.

Conversation turned to redfish and how abundant they are on our end of the Gulf coast and it got everyone’s attention. Being that everybody around the table are hardcore anglers and equally eager for adventure, it was decided that we needed to organize a Redtopia event in southern Louisiana. After everything these Florida guys have taught me about snook, I am anxious to get some of them over our way and show them a good time with redfish in the marsh.

All in all, it was another incredible trip to southern Florida. Even though the fishing was not the greatest, there is something about the area that keeps me going back. I am already looking forward to next year.