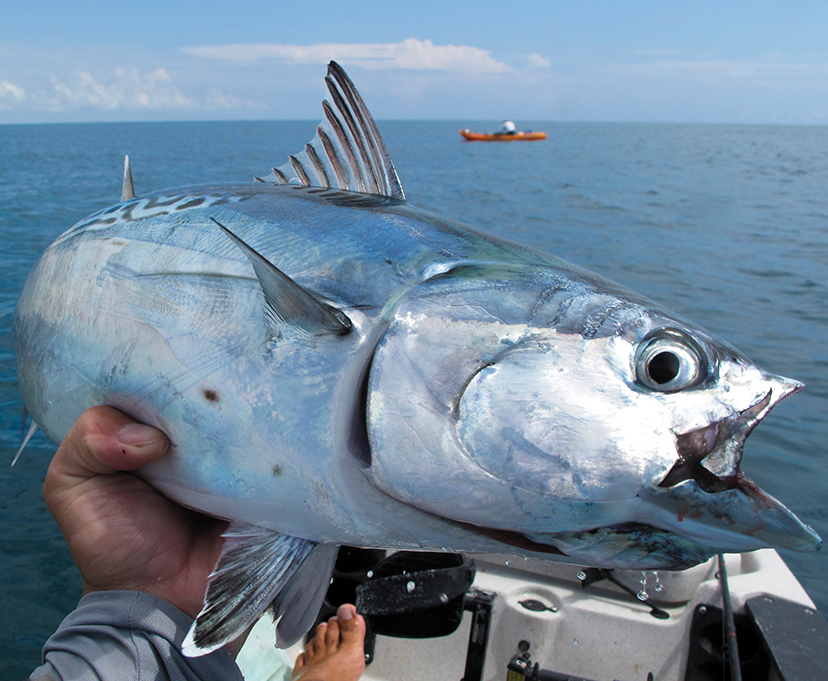 Some call them little tunny, most know them as bonito…all anglers love their feisty attitude.

Offshore kayak fishing has been a passion of mine for over two decades. I helped pioneer “beyond the breakers” kayaking.  Today, the sport has grown to previously unimaginable popularity.

Kayaking provides the ultimate in personal freedom on the water. The ability to travel to otherwise remote, isolated spots dramatically enhances the productivity of the sport. These days, world-wide, individuals of all ages take advantage of the stealth kayaking provides.

I planted my roots in the sport somewhat by accident. Shark fishing has served as the primary obsession of my adult life. When sit-on-top kayaks hit the market, shark fishermen began using them to deploy big baits, eliminating the need for the surf boards, inflatable rafts and jet skis they used previously.  By the turn of the century, kayaks became the norm for dropping baits far off the beach.

I purchased my first kayak around that time, a smaller Ocean Kayak model which I utilized for both fresh and saltwater.  The more I became focused on shark fishing, the more I dedicated the tool to that purpose, but I also recognized its broader potential.

Summertime shark fishing can feel relentlessly dull, especially during the day. Hot, grease-calm waters can seem stagnant and lifeless, until one sees organized bird and bait activity just offshore. One day, while sitting on the beach bored, waiting for a bite, I decided to break the monotony by hopping in the kayak and chasing the birds.

I soon found myself catching bonito and jack crevalle. All I could think of at first was how the fresh bait would increase my odds of getting a shark to bite.  After making forays to catch bait for about a year, I evolved. I began to drive the beach without any thought of catching sharks, simply to pursue the variety of fish feeding just outside the breakers.

At some point, my fellow big-game kayaking pioneers Curtis Mai and Kyle Lamoureux joined, and we started to catch fish like bonito and then free-line them live on light rods. Proudly, we were among the first anglers to actively target and catch sharks from kayaks.

Over time I found myself thirsting for more opportunities and adventures; catching king mackerel from the kayak became the next big thing. The kings' tremendous speed and airborne antics make fighting them from atop a raft of molded plastic a real thrill ride. We started to paddle around the jetties and found plenty of the silver bullets.

While doing so, we hooked giant jacks which took us on summertime sleigh rides. Our appetites for adventure pulled us farther from the rocks, and we began venturing to nearshore oil platforms.  Paddling up to four miles in the kayaks, we discovered a virtually untapped fishery. By  conventional power boats, reaching these rigs would require long, largely unwarranted hauls. Paddling to them from the beach provided quick access to pristine locations, where we explored the idea of catching red snapper from our kayaks!

Thoughts of new kinds of exploration continued racing around in my head. What if we could fish secret locations, with no visible structures? With thoughts of more and bigger fish, I and a couple others became the first to actively target hidden structures near the South Texas Coast, mostly within two miles of the beach.

The ocean floor close to our coastline generally looks flat and sandy, but anomalies do interrupt its uniformity. The remnants of ancient formations pepper the bottom under our waters, just off the beach. Many of these rocky structures are the size of a school bus, some even smaller; each provides a home to many reef fish.

We also located a handful of larger structures, some bigger than a football field. All these underwater gems provide refuge and food to gamefish year-around.

Until about ten years ago, we had these inshore secret spots mostly to ourselves. Few people knew anything about them. I understood the importance of keeping the locations of these anomalies secret. Secrecy in the fishing world is useful; exposing the locations of productive spots leads to knowledge spreading like  wildfire.

This eventually happened, when boats coming out of Port Mansfield openly revealed the locations of these spots, which started a self-sustaining dynamo, at times creating a fleet of vessels visible from the beach. Kayakers began to venture out and join the fray. Now, crowds of people fish these spots regularly. In less than a decade, we lost the secrecy of most of our spots, but I've discovered new ones through disciplined observation of the depth-finder.  Rest assured I'll vigorously guard the locations of those!

Aside from fishing these gloriously productive structures, one of the most enjoyable aspects of kayaking beyond the breakers is chasing birds. As summer rolls on, baitballs begin to form and run the nearshore waters. Birds and predatory fish find them. Those who paddle out to meet them encounter Spanish mackerel, skipjacks, jack crevalle, and sharks. Sometimes, kings, cobia, and tarpon join the mix.  These baitballs always travel with the current, so folks who chase them should be ready to cover water.

While I have not landed one from a kayak in Texas waters, I've seen sailfish slicing through the baitballs. For many, this is a bucket-list fish to catch from the yak; the dream keeps us paddling through the breakers time after time.

Offshore kayak fishing is unique. It provides a precious, revered sense of adventure. On my kayak, I've been dragged miles offshore fighting and landing  hammerhead sharks. I've won tournaments at some of my secret spots and lost track of how many STAR-worthy king mackerel we've admired and released. I've landed giant, leaping cobia and seen freakishly huge sharks while floating atop my plastic yak.

Strangely, paddling just a couple miles out opens up a whole new world. Offshore kayaking provides the ultimate in personal angling adventures and lifts my spirits like no other form of fishing.   After twenty-some years, I know I'll be paddling beyond the breakers as long as I'm able.