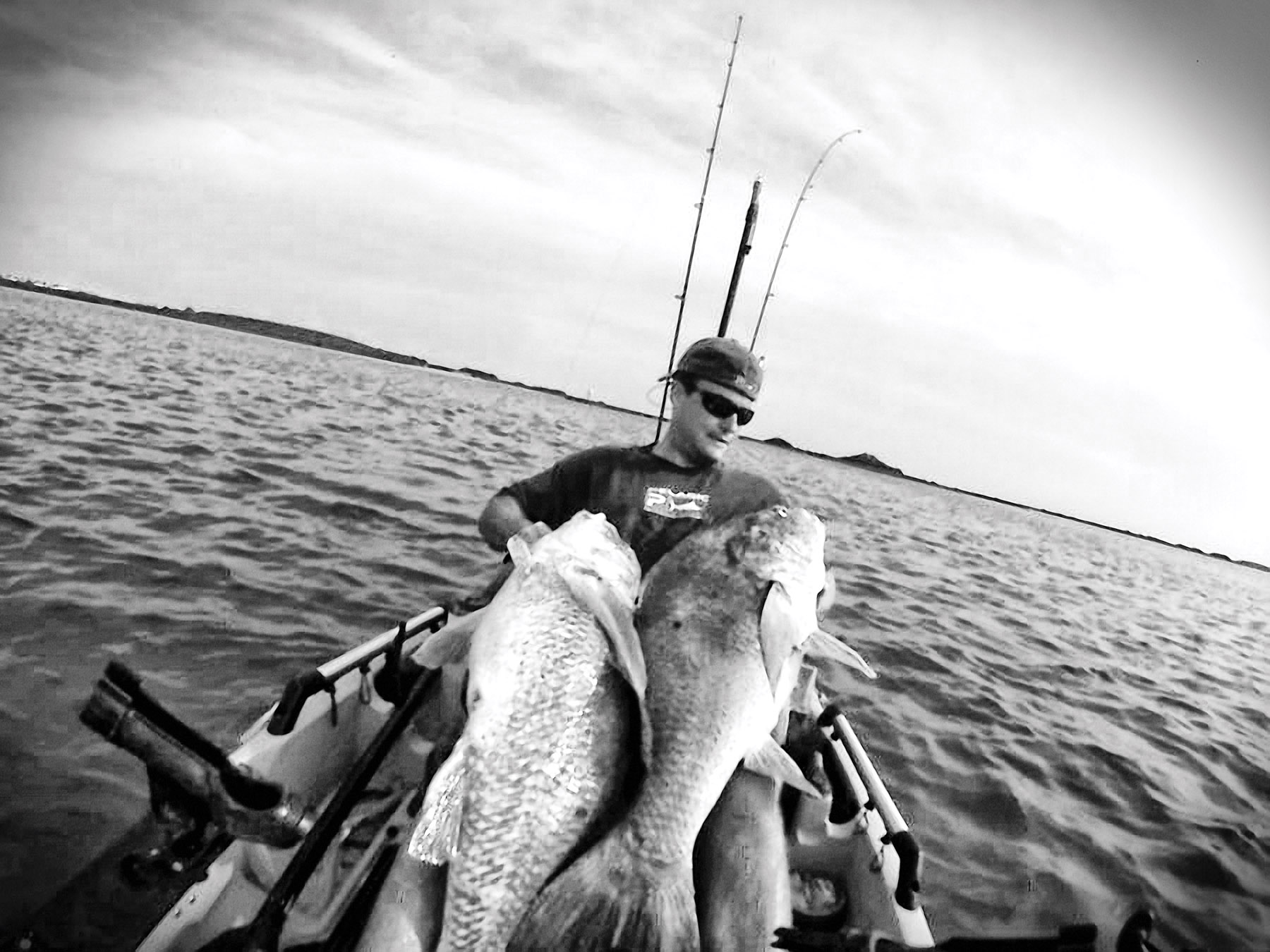 In total darkness, with only the glow of a headlamp and the nav-lights on the kayak, things are about to get real interesting. I know this because it has become routine. I have always had a single-mindedness when pursuing my fishing adventures, trying as much as possible to get away from the masses to enjoy nature one-on-one. Under the cold and clear sky, peppered with recognizable constellations, the only proof of civilization is the faint glow of Corpus Christi 20 miles away. I am kayaking various locations off the ICW when I suddenly hear a loud vibration resonating through the hull of the kayak. The game is about to begin!

I get stationed next to a dropoff along the ICW and open my ice box. I am not grabbing a beer nor tossing a fish into the cooler. This cooler has another purpose - a dozen live blue crabs for bait. Live crabs are irresistible to black drum and if they are around, they will devour them. I get my crab rigged on a large circle hook and launch it. Within minutes the bait gets picked up and sucked down by a hefty drum. I unclip from the stakeout pole and increase the drag as I begin to get towed down the channel. Fortunately, late at night there is virtually no traffic, and any boats you do see on the move give you at least a couple minutes warning. Enjoying my midnight sleigh-ride, I look back and see that my buddy Kevin is also hooked up, but we will be fending for ourselves as the battles rage.

The battle I am engaged in is fierce and steady. After several minutes I finally have the drum to the surface and alongside the kayak. I pull the big slimy beast over the side and into the cockpit. The fish continues its thunderous drumming. The sound from these fish is a loud thumping you would expect to hear during some Indian ritual. I work the hook out and after a measurement and a couple quick photos, the 42 big-bad-ugly gets released to continue on its life-long spawning mission. These desolate battles with nature are what fuel me. On this particular night in late-February I would land and release nine of these prehistoric looking critters, up to 45 inches in length and nearly 50 lbs. Several more evenings in the two weeks that followed I would wage many similar battles to get my fill of bay fishing.

Over 90% of my kayak fishing takes place offshore as I rarely have interest in the bay for big-game, simply because it is limited. I have caught my trout of a lifetime on artificial from the kayak, and no matter how many trout I do land, I just do not get the same thrill as BTB fishing for craziness. However, late February and March opens a rare avenue for me to take to the bay. This time period has been an alarm clock for the mature spawning drum. Due to their robust size and ability to use it to their advantage when hooked, oversized black drum (Pogonias cromis), dubbed big uglies by anglers, are an extremely fun species to catch on moderate-light tackle. Their battles can be tiring but nonetheless satisfying.

Black drum are a thriving species. They can be quite abundant in both the bay and surf and have been found as far north as Canadian waters. Their only real natural predators are sharks and humans. While most specimens average 10 pounds or less, they have been caught exceeding 100 lbs. The smaller ones have a unique and tasty flavor but the flesh of the larger individuals is coarse and usually full of parasitic worms. As they mature they lose any stripes or contrast they possess as juveniles and begin to look dull and ugly, hence the name. But make no mistake, they use their bulk to their advantage and will often swim along the bottom effortlessly when hooked. Due to often being stacked in huge schools, they are easily targeted by inshore fishermen. Here in Texas we are fortunate that there is a solid drum population along the coast. Conservation has helped preserve and protect the fishery for all to enjoy.

Drum have a particular taste for crab and crustaceans, but they are often caught on various artificials as well. When kayaking for trout and reds, it will not be uncommon if I hook a black drum on a soft plastic. During the spring time, I have sight-casted to them with Berkley Gulp and, while it is still considered bay fishing, I do have to admit it is a blast to see them pick up a bait and run on the flats! As long as the weather is still cool in late-winter and early-spring, you can get these oversized monsters even during the daytime. Due to extensive boat traffic I really try to target the granders at night. There is just something about the whole in-the-darkness factor that adds to your already pumped-up adrenaline.

There is a slight issue though which may arise if the big ugly action gets heated up. Fresh bait can be in short supply at times and if conditions have been harsh, you may not be able to get your hands on crabs or mantis shrimp (sea lice). In times like these you have to improvise. You can use live/fresh dead shrimp and these can be effective, however these baits are usually hammered by the hardheads and perch long before the drum find them. Fishbites work extremely well especially with larger strips. Other similar baits or combinations have a great chance as well. I have gone so far as to resort to using frozen pre-cooked Cajun crawfish and have actually CAUGHT oversized black drum on them! The common denominator with black drum is the ability to obtain the bait. If you can find your particular bait, it may be worth venturing out to give it a shot.

There is just something about this particular species of fish that has no reason for them to be glorified. They are a largely obtuse fish, and with their alien-like chin barbells, their appearance can be quite ugly even freakish. The oversized fish are poor in terms of edibility, and legally have to be released anyway. There is no finesse or majestic make-up with the big specimens of this species. However, there is just something about these titans of the bay that keep me and many other anglers coming back on those long eerie nights. Perhaps it is the fact that these are the kings of our coastal bays and their sheer size makes them a formidable opponent. Or perhaps it is the natural and spiritual pursuit of hearing that thunderous biotic drum roll.