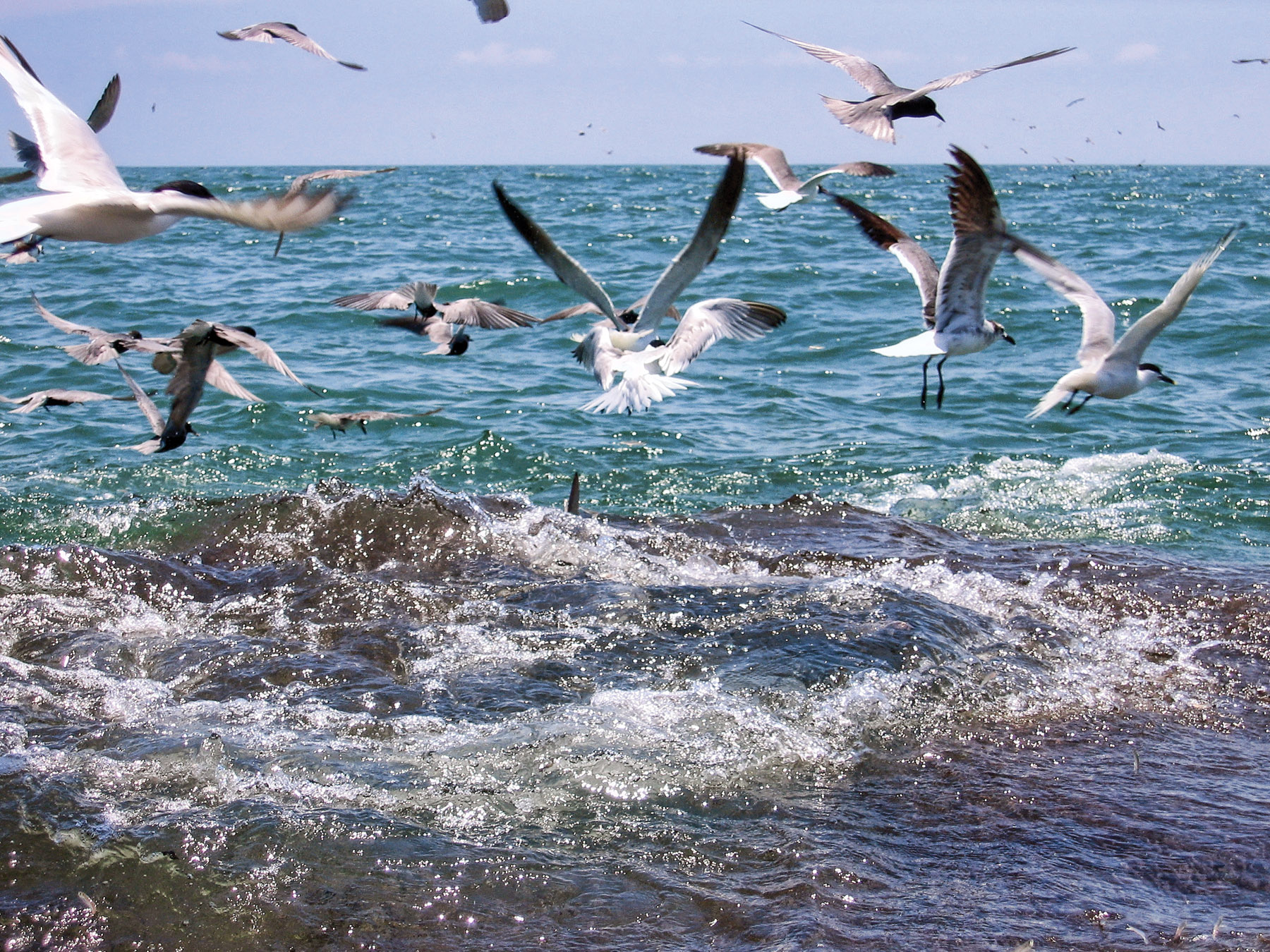 Shark slicing through anchovies – get a bait in there!

The world of kayak fishing branches into varying venues, sometimes traditional and sometimes alternatively unorthodox. I take part in a great variety myself- everything from bay fishing for shallow-water speckled trout and reds to wintertime battles with oversized black drum in the vicious, bitter cold. Several years ago I had the luck-filled opportunity to be the first angler to catch a yellowfin tuna out of the kayak in Texas (via mothership some 130 miles offshore) though some of my more relaxing and zen-esque outings have been flounder gigging out of the kayak on cool late-autumn nights. I can truly say I put a lot of miles on my plastic vessel(s). With all these methods mentioned, without a doubt the most exciting and adrenaline-packed adventures I have taken part in happen just beyond the breakers, within sight of our sandy beaches.

It is a mysterious yet dangerous world when you begin to venture past the coastal sandbars in any customized kayak. Things can suddenly become very scary and even dangerous depending on a countless number of unpredictable circumstances. You can (and often) encounter sharks, and sometimes those sharks are freakishly large and frighteningly intimidating. You must always keep your composure and as the saying goes - "try to remain cool, calm, and collected." Sharks are curious creatures. As remarkable and terrifying as they may be, the encounters are usually short-lived (pending you don't have a fresh catch dangling at the kayak). Sharks will almost always do a quick investigation and after seeing that your kayak is not a natural slab of food, they simply move on. I've had large hammerheads circle and "eye" the kayak out of curiosity and then descend to the depths, moving on with their business. One of the cardinal rules of offshore kayak fishing (aside from never to do it alone) is to always be aware of your surroundings. If you can be mentally alert and observant of your surroundings, then the rest is up to you to have fun and survive the day in your plastic battleship.

Perhaps the most-asked question I get is- "Where to fish?" This is a question that has resonated since the dawn of caveman angling and will only continue to be embedded in the curious angler's vocabulary. I often post reports of my adventures online which in return generates countless people asking what direction I would point them. Overall, the answer is almost always the same and after quick thought, quite obvious. People often think that I roll down the beach and fish a pre-designated spot where "the fish are always hanging out" but this is simply not the case. Your number one key in regards to finding fish are the birds. As with so many aspects of fishing, birds (gulls, terns, and pelicans) can direct you to optimistic bait balls, or if you are lucky enough, even those jaw-dropping frenzies that rival insane documentary television footage. Finding these birds offshore are first and foremost your best chance at getting into fish in an area without known structure. Driving up and down the beach with a pair of binoculars can be the difference between slaying the fish, or merely getting a tedious workout.

In Texas, we have about three to four solid months during which there is likely bird and bait activity just offshore. Fortunately the mid-late summer is a Mecca for predatory action in our coastal waters. August and September are some of the most productive months to journey out seeking large king mackerel, cobia, and even tarpon. Anglers may have to kayak out perhaps a mile and just wait for action to develop. Many times you may wait - and wait - and wait - with little or no reward. However, there are times when all Hell will break loose and the images captured by your retinas are nothing short of true bliss. With the dusky anchovies and scaled sardines gathering and moving along the coast, this time of year is absolutely prime to experience these types of chaos. Mixed within the mayhem are mackerel, jack crevalle, skipjack, bonito, cobia, and various other species of predatory goodness. The action at times can be surreal and the sights observed can be likened to the term ecstasy. During these mass frenzies, several consecutive casts can produce a mixture of jackfish and bonito (little tunny), worthy of battle on any offshore vessel. You may also have the chance to sight-cast at an opportune cobia. The fact that a single baitball could produce such an array of gamefish all at once is surely one of the joys of this extreme method of fishing.

When chasing schools of baitfish or following the keen-eyed birds, you end up covering a lot of surface area. It is important to note that while hunting them down you will get a thorough cardio workout. I routinely turn my GPS on and record my track/trip when I venture out. On an average summer day my trip-odometer reads anywhere from 6-9 miles and I've done as much as twice that. For those out of shape or suffer from any physical condition, I highly recommend keeping the kayak on or near the beach. Being far offshore is the last place you want anything to go wrong, health-wise or otherwise. When kayaking with a buddy (which you must always practice), communication is essential. If one individual needs a short rest, both should. Never leave your partner or friends in the dust and always bring adequate drinking water and safety gear. I cannot stress how vital being safety-conscious is offshore in such a small vessel. If you follow proper safety precautions, then your adventure should prove golden and you could be in for a real treat.

So what is going on right now along our coast and what are the prospects for the near future? Simply put, as of the past month the anchovy baitballs are forming daily. Most activity is concentrated about a mile out however some of the baitballs are reaching just a couple hundred yards from the surf zone, primarily along the National Seashore of Padre Island and north on Mustang Island. As the summer goes on and we get closer into fall, the bait will continue to draw nearer the beach. In early July the little tunny action was on fire, with most averaging 5-8 lbs. Little tunny are cousins of the Atlantic bonito and are pound for pound some of the fastest fish you will ever encounter from the yak. The trick with these hydrodynamic speed-demons is to throw something very small mimicking what they are feeding on, or "match the hatch" as they say. As we get into August-September, hordes of jack crevalle and king mackerel will join in and start demolishing the bait. Topwater lures with very light wire are always effective. From now until October there may be an element of surprise within the baitballs because you can hook into just about anything, including tarpon and on a very rare occasion - sailfish. For me this is a very exciting time for kayak fishing and you can bet I'll be out in the cruel heat giving it Hell for the next month or two. Then it will be back to the beach for some big-shark action!

Have fun, be safe, and rock on!