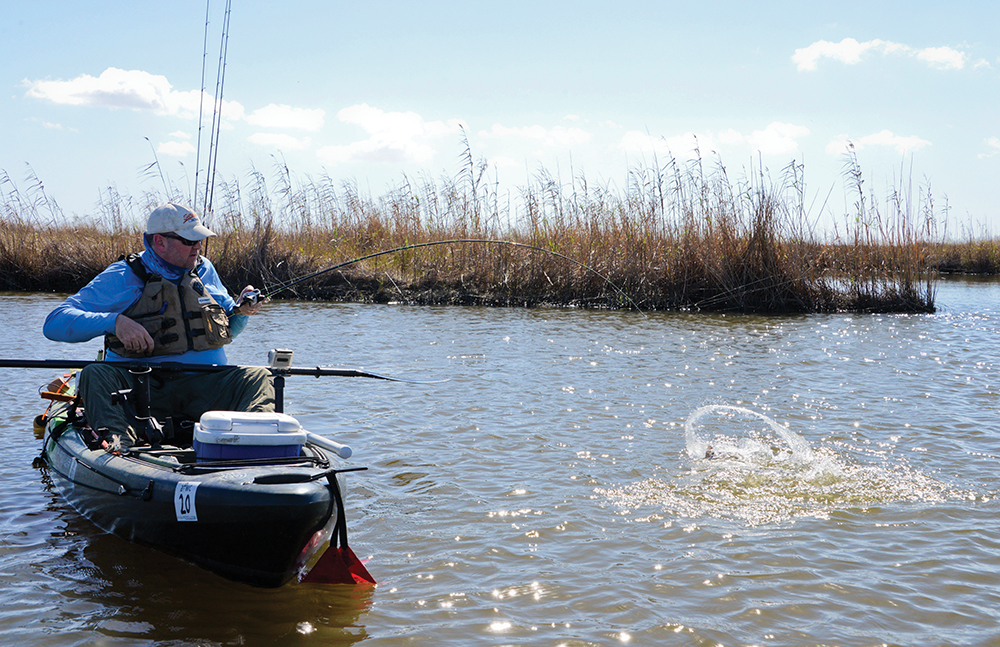 When I look back at past years, March has always been a month when fishing patterns make the seasonal transition from winter to spring and the challenge of mastering those changes gives me great motivation. With the warming temperatures, the targeted species habits change and I always tried to make adjustments accordingly.

Sadly, I’m just not feeling the motivation yet this year.

One of the main reasons I believe this has happened is that this past year has probably been the worst for trout fishing I have ever experienced on Sabine. Well, maybe tied with the previous year.

Without a doubt, all the rain we have had locally has impacted our estuary negatively. With Toledo Bend and Sam Rayburn both dumping as much water as they can to maintain pool levels, it has dispersed most of the fish on the lake and has generally made everything very inconsistent. I have seen photos of people fishing for trout, catching bass on Corkys at the north end of the lake, and even heard reports of bass being caught as far south as Pleasure Island. Needless to say, the water in our lake is pretty fresh!

However, with the poor winter trout fishing I have encountered, I continue to hold hope for things to turn around in the months ahead. Better fishing days have to be in our future, somewhere. The transition into spring may be more abrupt this year but fish will tend to stick to their usual routines. As baitfish begin to move back into the lakes and upper parts of the estuary, redfish and trout will start to congregate on the flats and bayous, waiting for their turn to feed.

As the water temperature starts to rise, I like to change my bait selection a bit from the lures that I was throwing on the colder days. Usually, the first lure I replace is my Corky that has been tied on since early December. I like to throw a topwater, usually a She Dog or a Super Spook, since the fish are coming out of their winter sluggishness and tend to be more active. However, even though I took my Corky off does not mean I will completely forget it. I learned a few years back that if trout are short striking a topwater, waste no time in tying that Corky back on. I found that the hookups would increase if you worked it at a faster pace nearer the surface.

Since we are heading into springtime, I would like to pass along what I consider a helpful tip, especially for those who might have taken the winter off from fishing – you need to seriously consider spooling your reels with fresh line.

March is arguably one of the best months for landing a personal best or possibly even a lifetime speckled trout, and you certainly don’t want a fish of that size and quality getting away because of weak line.

A few years back, a buddy and I were out fishing and it was his first trip since fall. We started out just before daylight and we immediately started catching fish on topwaters. About the fifth fish of the morning, my buddy got a ridiculous blow-up on his Skitter Walk and we instantly knew he had a wall-hanger. As he got it closer and just out of netting range, his line broke and we watched her swim away. After being heartbroken about it, he told me “I literally told my wife last night that I needed to replace this line.” That was a mistake that won’t be made again!

Other than trout, redfish this time of year are plentiful and usually are easy to spot. Only thing is, they can be very picky when it comes to tricking one to bite. When the smaller pods of baby shad start moving in, you can see redfish crashing the shoreline, gorging on the tiny fish. At that time, it seems as though this is the only thing they want to eat and it can make for a frustrating day. I think early spring is the only time a redfish only wants to eat just one thing. I always try to throw smaller profile lures when I find picky, feeding fish. Usually smaller swimbaits or Fluke Jrs are my go-to lures. Also, a Rebel Pop-R from the bass fishing world can be extremely effective – just make sure to replace the hooks with something sturdy enough for redfish.

Like I mentioned earlier, we have had a lot of rain recently and that has made our water incredibly dirty. This has all but eliminated sightcasting for me, unless a redfish was blatantly showing himself, which has not been too often lately. So, I have had to resort to doing a lot of blindcasting. Since the water clarity has been so poor, I have switched around a few of my confident lures. Instead of throwing my gold spoon, I have taken to throwing a Chatterbait. The extra vibration in the dirty water helps redfish find it more easily than a spoon, or any other lure, I believe. Also, if you buy Chatterbaits for redfish, be sure to buy the higher-end ones; the cheaper ones are not built for the power of a redfish and the hooks will straighten out.

I will be out there trying to unravel the early spring patterns, even if the prospects for heavyweight trout will be limited. There will be many opportunities to land plenty of fish and also, maybe, a chance of catching a personal best here on Sabine. If you are lucky enough to land such a fish, please practice Catch & Release and let the bigger trout swim away. The big spawners are vital in continuing to provide a healthy resource. With the warmer days coming and the shift in feeding habits, be sure to stay a step ahead and master the transition.