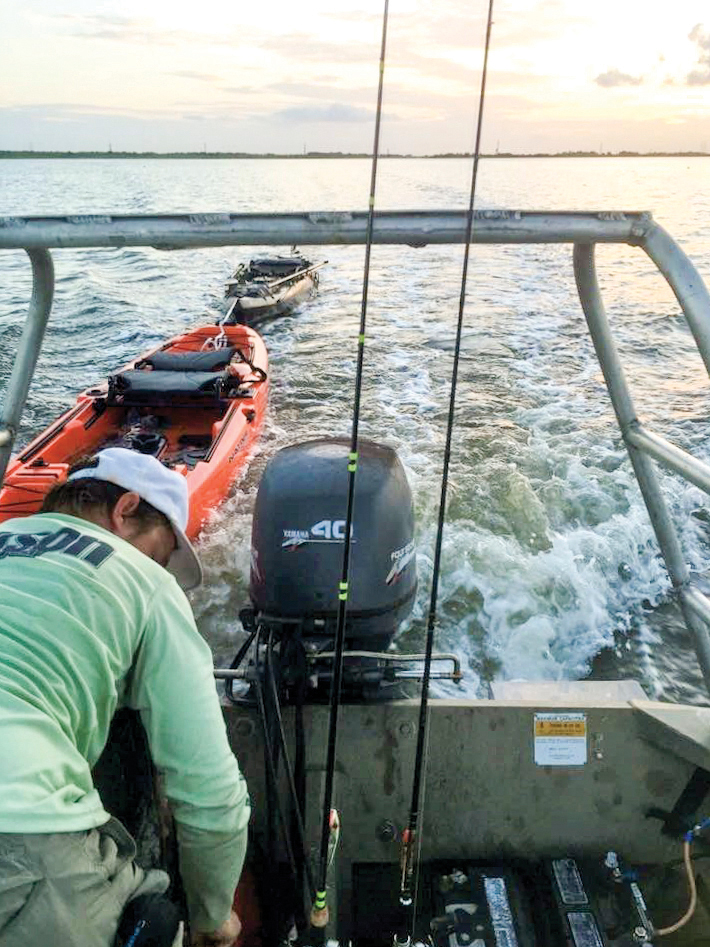 I believe a motto appropriate to kayak angling might be: Where there’s a will there’s a way. Kayakers are some of the most innovative people in the fishing community, simply because we must be creative and adaptable to overcome the limitations we place upon ourselves. We are limited to the amount of gear we can carry, the places we can access, and the number of days the weather allows us to be on the water. Accepting these limitations, we strive to find ways to expand our limited opportunities.

It is no secret that kayakers are at a considerable disadvantage when it comes to exploring new water. I know that everyone has an area or two they dream of trying someday but those dreams are unrealistic due to the paddling distances required. I have seen people mount trolling motors, small tiller-steer outboards, and even weed-eaters retrofitted with a prop to mimic a Go-Devil (I told you we were innovators). All of these are homemade creations that are designed to get you to an area faster and go further. However, no matter how unique and creative such inventions might be, there is a better way.

We pondered the dilemma long and hard and finally the light came on…mothership! If you have access to a motorboat, and size really doesn’t matter, you can strap kayaks and gear aboard and take advantage of the motorboat’s range to reach far-flung destinations in mere minutes.

One day last summer, my buddy Nate and I were discussing our fishing trip for the next day and were torn between two ideas. He needed to run his boat and was suggesting that we put the yaks up for a morning. While on the other hand I really felt like paddling the next day. It was light wind and perfect tides; you have to take advantage of days like that when you are a kayaker. Anyways, we have heard of people doing this before so we figured why not do both; we decided to use his boat as a mothership and explore some new marsh in the kayaks.

This was the first time either of us had tried to pull this stunt. The conversation that Nate and I had got about as far as him asking, "Do you have rope?" I quickly replied, "Yup," and it was settled. I was meeting him at the boat ramp at daylight with rope and kayaks and he was bringing the boat.

Arriving at the launch ramp, we surveyed the problem of how best to transport the kayaks. Lacking room to carry them onboard, we quickly decided to lash them together side-by-side and attach a tow rope to his poling platform. There was a bit of a learning curve – If the tow line was too short the kayaks would start surfing the boat wake, cutting back and forth through the wave, and taking on water. Note: Remove all scupper plugs and seats before getting underway.

After a little troubleshooting, we found a good length to leave the kayaks at and still get up enough speed to cross the open water. Crossing the bay, we wound our way through a bayou and eventually far enough into the marsh to begin paddling.

Nate pulled the boat alongside the bank and set the anchor in preparation for transferring tackle and gear to the kayaks. We only had to pull in the tow line and the kayaks came within easy reach. In practically no time at all, and with very minimal effort, we were on our way to explore new fishing grounds.

We ended up paddling across pond after pond and catching new fish in all of them. As we continued deeper into the marsh it seemed there was no limit to the fish, and by the way they were reacting I would be willing to bet nobody had ever tried to catch them. The new marsh was not only full of hungry redfish, it held some really solid ones as well. Our lure selection really did not matter; an accurate cast was all we needed. That new marsh had a little more grass than we were expecting but they were in it thick and feeding recklessly.

After exploring the new area thoroughly, we embarked on a quick and effortless paddle back to the mothership. We paddled up, unloaded gear, lashed the kayaks behind the boat, and started making our way back to the ramp. Having mastered the towing technique, the ride back was much smoother than at the beginning and made a great way to end the day.

Using Nate's boat as a mothership was a great idea and something I plan on doing again this summer. It took a small learning curve but, once we got all the kinks worked out we were good to go. If you have access to a boat of any size, I recommend that you and a buddy load up the kayaks and go explore a new area. You never know what you might find.