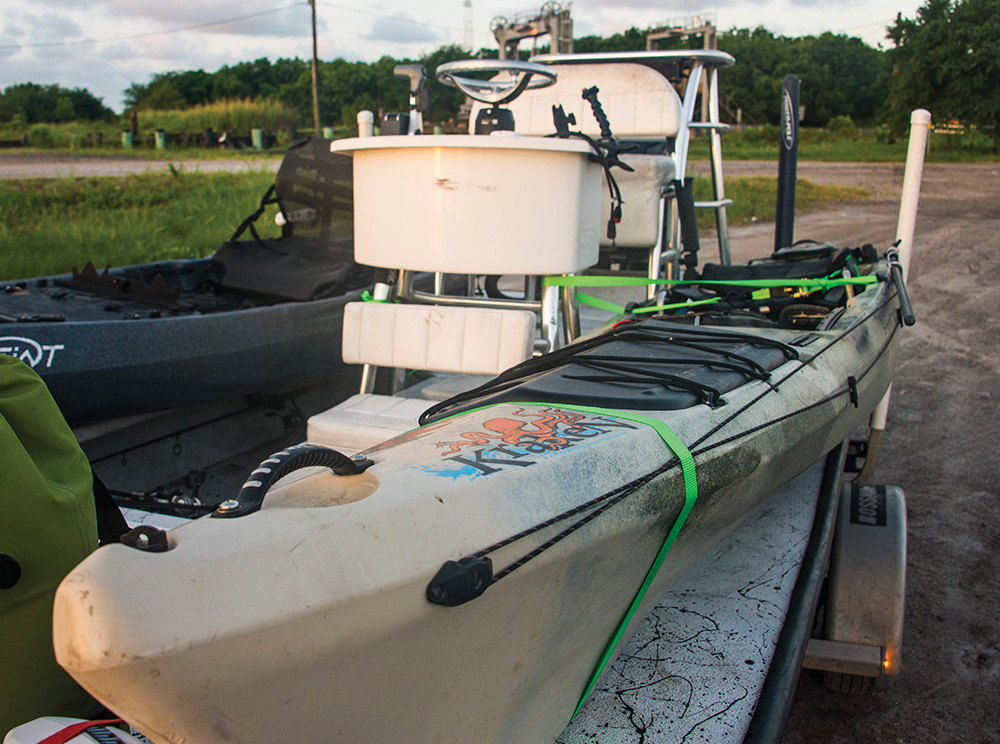 As most kayak anglers learn early in their careers, we often find ourselves logistically challenged. Regardless of where you launch and physically capable you might be with a paddle in your hands, there’s always going to be places you would like to fish but simply cannot reach. This is where mothershipping becomes an option.

For anglers who might also own a skiff, or have a friend that does, mothershipping is when you load a kayak or two in the skiff and transport them greater distances than we can paddle to marsh or other backwater areas that are ideally suited to fishing from the kayak. Solving the logistics problem from this angle greatly expands the paddling angler’s horizons, saves time and exertion, and makes for a very enjoyable outing. There is nothing more disheartening than facing the trip back to the dock after a full day of fishing, under blazing summer sun into a headwind.

Last fall, I made a skiff trip, sans kayak, and decided to ease into a pond that I had never fished. Shortly upon entering, the sound of oyster shell scraping gelcoat reached my ears like fingernails on a chalkboard. More than I could stand, I decided to ease back, anchor outside, and study the pond for signs of life. Sure enough, within a short time, I began noticing tails popping up across the flat and I could see a small school of reds pushing along the far shoreline. Seeing is knowing; but how could I get to them? I kept thinking to myself, “Man, I wish I had my kayak!”

Since that day, I kind of put that remote pond on the back burner but never forgot about it. Here recently with all the rain, my typical areas in Sabine have been inundated with fresh water, which led me to wanting to explore new fishing grounds. That was when I got the idea to mothership back to that shallow, oyster-filled pond and see if those reds might still be there. Later that afternoon I made a post on the Upper Coast Kayak Anglers forum asking if anyone wanted to join me. It wasn’t long when my buddy Daniel called to say he was up for it. We put a game plan together and decided to meet early in order to get the kayaks loaded and strapped down.

We arrived to the boat ramp just in time for the sunrise and we began our journey with both kayaks strapped along the gunnels of the skiff. We made our way through the bayou that leads to the oyster pond, but this time, I knew to stop short of the entrance. I lowered the Power Pole and we began unloading kayaks and gathering gear. Scanning the area, we devised a plan with Daniel heading to the right while I went left, eventually meeting in the middle around a cluster of small islands. Further fishing plans would be decided after the rendezvous.

As we broke away, I began to paddle and could feel the blades scraping clumps of oysters. Expecting there might be fish hanging on that structure, I stopped and started throwing a She Dog across the flat before creating too much disturbance. I didn’t make it 30 yards into the pond before seeing a swirl out in front of me. Too big to be a mullet, I made a cast just to the side of it and began a slow retrieve. Just as the lure passed the targeted area, a small wake began trailing my lure and grew quickly. In true redfish fashion, it attacked from behind and just smoked my She Dog. There is no hookset required with a strike like that; all I needed to do was hang on. As soon as the line came tight the fish made a sharp turn into the oysters and broke me off. No worries though, at least I knew I was on some willing fish.

Tying another lure, I could hear redfish blowing up along the shore further ahead. Since that was the only topwater I had with me, I tied on a Keitech swimbait with an Owner Twist Lock hook (weedless) to keep it from snagging on the shell. Before I could make another cast I heard Daniel’s yell signaling he was hooked up. Even from where I was at I could tell he had a decent fish on. Time to keep moving!

I continued fishing the shoreline while keeping a sharp eye in the middle of the pond for signs of fish. The water was just deep enough to keep the fish concealed unless they were moving. As I moved forward, I got to the mouth of a pocket and spooked a fish that was sitting there. I judged the angle of the wake and made a cast that enabled bringing the lure directly into its path. A solid thump and the fight was on. The fish made several strong runs before I could bring it alongside the kayak, weighed it on the Boga Grip, snapped a photo, and made a quick release.

Like we had planned, Daniel and I eventually met at the islands. He had landed two nice fish, lost one at the kayak, and had several more short strike his topwater. While talking about the drift we’d just made and what our next move was going to be, we both heard a familiar sound. Daniel made a long cast and was hooked up. We got a quick picture with his fish and sent her back into the pond. It seemed like that fish was the turning point for our morning. That was the last fish we enticed to bite. We pushed several fish but could not get any to eat. It was almost like they were sleeping and didn’t want to move or feed.

After realizing the bite had died and the temperatures were quickly rising, we decided to head back to the mothership and ride around to look at a different area. We slid the kayaks back on the boat, strapped them down and away we went. We found a few more fish throughout the day but they seemed to have the same lethargic attitude as the fish in the first pond. That was our sign and we decided to call it a day.

It turned out to be a fun day of fishing and getting to do it in a new area. Without a doubt, we would not have been able to accomplish it without mothershipping via the skiff. I hope you are able to explore new water as we did, see new sights, and perhaps catch a few fish. Stay safe out there!