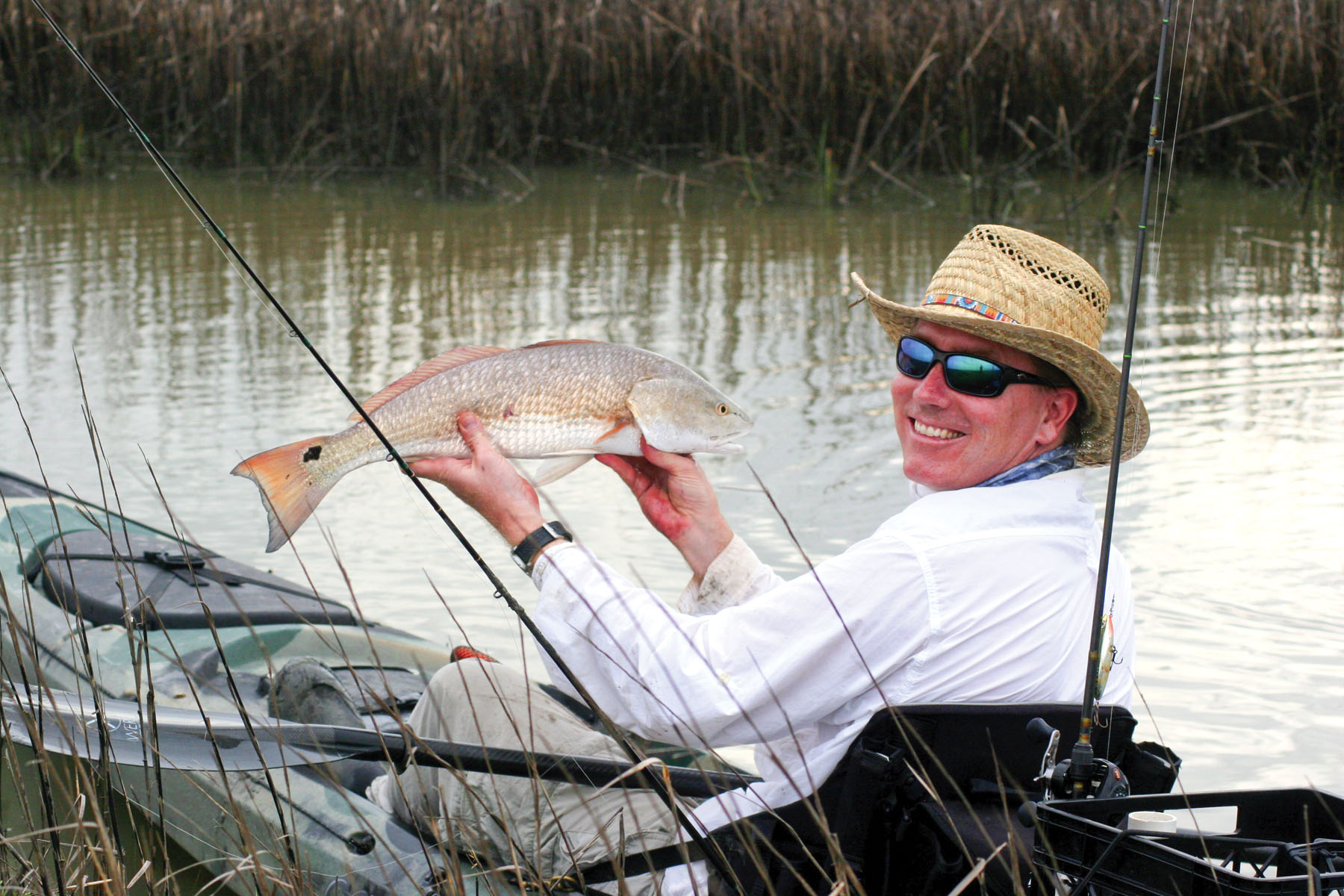 My fishing buddy Cliff with a nice red.
My friend Rick Spillman said something the other day I thought was quotable. It was his response to the age old question "When is the best time to fish?" His response was given without hesitation "When you can." I like that answer.

For all of us weekend warriors it isn't exactly easy to just pick up and go fishing on some random day when the weather forecast, tides and solunar tables are all aligned. We take what we can get and make the best of it. At the end of the day though, it's not really so bad if you stop and consider another age old saying "A bad day fishing is better than a good day in the office." I like that one too.

That brings me to the topic of this past month of fishing for me. After a Saturday devoted to work stuff, my buddy Fred and I had Sunday plans to head for the coast with our kayaks. Morale was high leading up to the trip as fishing had been great in this particular spot for the previous several weeks. The two of us launched just before sunrise and made our way to the promised land (water).

It didn't take long after entering the first skinny area to realize we weren't going to be able to fish the general marsh we intended because the water was too shallow. Yes, kayaks can definitely go skinny, but this was too skinny, even for the yaks. Stubbornly I mucked through the half inch of water and six inches of mud, dragging my kayak, hoping to find deeper water holding fish. As one highlight amid my misery, I noticed the familiar sign of a pod of reds coming up a small channel. I have a personal goal of videoing fish and fishing action this year to collaborate a cool video, so I grabbed the HD video camera rather than my rod.

For the next few minutes I recorded this group of fish working its way up that little ditch, which wasn't but maybe more than five inches deep, as they approached the all-but-drained flat I'd been dragging around in. The fish even knew it was too skinny and they turned back before they completely beached themselves. At this point the fishing adventure for Fred and I all but ended for that day. Travel time and other obligations prevented us from efficiently relocating to a different spot, so we loaded up and hit the road for home.

Fast forward two weeks and Cliff and I made a return trip to the same spot. Immediately after launching I knew the tides were good for us this time. Sure enough, we made it anywhere and everywhere we wanted to go. The water was the perfect depth to be able to traverse the marsh while being shallow enough to expose backs and tails of feeding redfish. I didn't actually catch a fish that day with Cliff as I spent a lot of time behind the camera, but I did get to watch him and shoot some nice video, along with some still images of a number of reds working the shorelines and just crushing shrimp and baitfish.

I look forward to the next time I can fish and whatever else Mother Nature has for me to enjoy.

This past month Mr. Bill Lewis wrote, asking a couple of kayak questions. He first asked "What is the black line attached to the side of your kayak?" and he also asked "Do you ever use an anchor to remain stationary while fishing from the kayak?"

To your first question, Bill, the line around the bow of the kayak is, from what I understand, somewhat of an Ocean Kayak trademark. It's practical purpose however is to aid in returning your kayak upright if it were to turtle (flip over), the rope gives you something to grab onto easily.

Now for your second question, I rarely use an anchor. I have a three pound anchor that I have carried with me in the surf but I rarely visit the surf. In the shallow water of the marshes I enjoy most, a Stake-out Stik is my go-to anchoring device.

For the rest of you readers, I couldn't help but ask Bill if he was ever questioned about being THE Bill Lewis, as in the creator of the Rat-L-Trap. He responded back that indeed he has been asked that, and though he didn't create the Rat-L-Trap, to his kids he is THE Bill Lewis. Great response, Bill. Thanks again for your questions and photos. Keep following along and good luck on the water.

Readers, please don't forget, if you have any kayaking questions shoot me an email. Also, include a picture or two of you fishing or showing off your catch in the kayak.