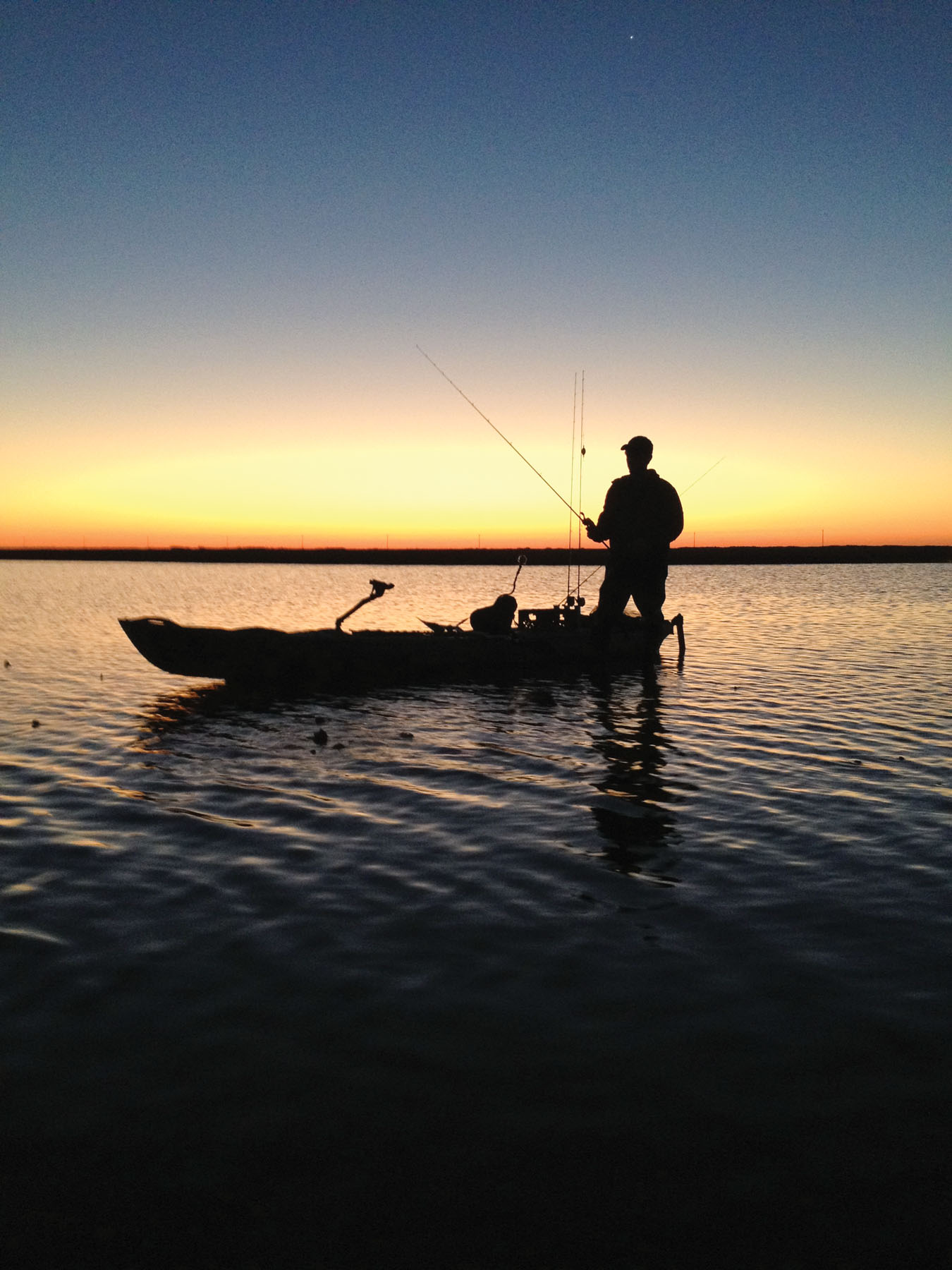 My mind is on trout, specifically big ones. I am by no means a trout expert so this trip was a get my feet wet learning experience to more or less just find trout of any size and learn to catch them. Rather than solely focusing on sighting for backs and tails of feeding reds, I also kept an eye out for trout slicks, working birds in the open water, etc. I also continually stuck my paddle down into the bay floor to test the water depth and floor type, be it mud, sand, shell, or a mixture thereof.

At one point mid-morning the birds did exactly what every fisherman wants by flocking together and terrorizing the water/fish below. My two fishing buddies and I took firm grips on our paddles and made haste toward the chaos going on about 400 yards away. We approached the scene and immediately began casting.

FISH ON! Cliff was first to get a hook-up on his Norton Bull Minnow. As he got the fish to the yak he realized it was a red. About that time, my second cast, I too hooked up on a red. After the battle and the release, my next cast was met with a solid thump and another nice slot red. Cory meanwhile was working a Super Spook on top and kept getting kisses but no hook-ups. He finally got a hook-set and the fish turned out to be an undersized trout. Cliffs second fish of this group was also a trout, a little better specimen at about 17 inches.

Just as things were looking really good, a flats skiff buzzed by, courteously giving as wide a berth as possible without grounding on nearby shallow reefs, but in that vicinity the damage was done and the birds and fish both vanished. Making note of the water and bottom structure where it all went down, we moved on hoping to put the information gathered to good use elsewhere.

For the remainder of the day we paddled the marsh shorelines and shallow flats and picked up a few more reds. We continued to keep our eyes peeled for trout signs and did chase one more group of working birds, but nothing like the first bunch.

The weekend of this fishing trip is easily one of my best-ever in the outdoors. Not only did we have beautiful weather and water conditions for kayak fishing, and some very willing reds; I was lucky the day before to harvest a very nice whitetail buck.

Referring back to a goal set a few months ago about a 30+ redfish on fly; Cliff got it done on a solo kayak trip of his own.

I received email from a reader recently asking my thoughts and knowledge of what I will call the fishermans and duck hunters right-of-way. The question was: What are the laws/protocols on the scenario where fishermen (in this case kayak fisherman) and duck hunters cross paths on the water?

I sent an email to TPWD inquiring of laws related to the matter but have no answers as of press time. I also began reading online and asking other knowledgeable hunters and fishermen their thoughts. I found a forum thread on Texaskayakfisherman.com devoted to this very topic. With no official response from TPWD or other law enforcement, heres what I have to say my opinion only!

What it boils down to is common sense and courtesy. On the side of sense, be aware of your surroundings and be well-informed as regards hunting seasons and the likelihood that you might be heading into a popular hunting area. The last thing anyone wants is to be involved in a Dick Cheney on the water. Be courteous and unselfish, and by all means, always strive to be the bigger man.

The outdoors is everybodys to share and the fact of the matter is that duck season is only a couple of months out of the year, whereas the fish can be chased 24/7/365. Now that I think about it, this situation is no different really than two fishermen meeting up in a small backcountry lake or cove. If you paddle to an area and find another fisherman, you hopefully will be respectful enough to leave them and find another spot.

Back to encounters with duck hunters; much of the time the hunters will pull out long about mid-morning, so just back off for a few hours, share the water and let them do their thing. You can always fish the spot later when theyre gone. Always remember that waterfowl hunters are your fellow outdoorsmen and many of them are also anglers.

Until next time; have fun, be safe, and bring a friend.