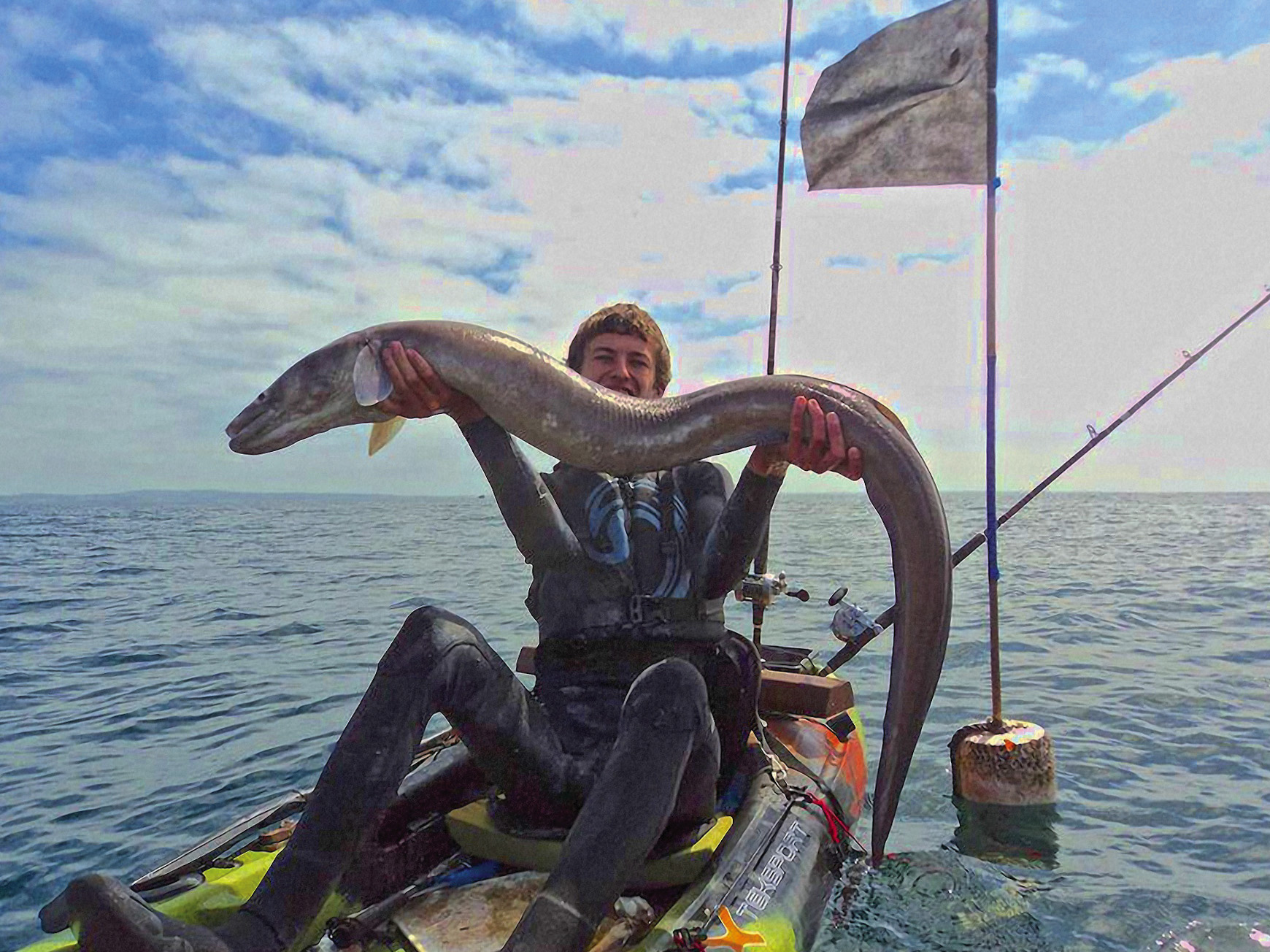 Liam Faisey with conger eel – UK.
Since mainstream kayak fishing burst onto the scene nearly a decade ago there has been a growing fascination within this mesmerizing sport. To many, this is not just a hobby nor a recreational means to pass time. From novice to professional anglers, kayak fishing is an addiction, a saline flavored adrenaline rush that often lands participants in Mother Nature's turbulent lap. Being nested within the thin plastic hull presents aquatic freedom and opportunity that might not be otherwise available and, for many, a preferred way to pursue predatory fish. Whether it is for reasons of efficiency, athleticism, or financial ease, kayaking proves more and more popular throughout the world each year. For those who have yet to experience the thrills of this relentless addiction, I challenge you to take part in Kayak Wars.

Splashing into this new year we have great hope for another stellar season in the Kayak Wars World Fishing Tournament. This will officially mark our eighth season that this remarkable event has taken place allowing for nearly anyone to participate. In 2013, we shocked the fishing world by allowing participants from Canada, Australia, UK, Ireland, Germany, New Zealand, and several European nations to compete. Within the excitedly anxious 1500-plus registered anglers that battled it out in their respective regions, we racked up a mindboggling 40,000 catch submissions surpassing 2012 by more than 10,000!

I have been greatly honored to organize and run this phenomenal fishing tournament from the start. With great support and help, I continually make it a quest to exceed the previous year's expectations and results. Whether bouncing around in the choppy bays of coastal saltwater or stalking bass on a pristine lake, your possibilities within this tournament are pure limitless.

The way this event is organized is simple. You assemble a team of three to five anglers and register online. The teams are placed in their respective regions (i.e. Texas is under South Central, etc.) Being an online-based event, you take digital photos of qualifying fish from in the yak during your outing. When back at the computer, you simply upload the photo(s) (showing an accurate measurement) and you are awarded points based on species and size. Last year, Kayak Wars had an eligible 300+ species worldwide. I have to admit, programming the system for species in Europe and Australia interested me. Many of the fish I have never heard of but grew quickly fascinated with them. Unlike many tournaments, you are able to submit very modest yet above average fish allowing eligibility on most of your adventures. There are also separate specialized "kayak man" points awarded for various achievements. In the end, the anglers and teams with the most points are ranked within their region.

An intricate part of this event is how it is set up; consider it to be somewhat of a sports league. Stats are compiled and stored, not just the current year, but essentially over your whole career. Since we went to this format there is now more than six years of detailed data in the system, with a heavy handful of individuals active since the beginning. Imagine being able to reflect upon how many redfish you caught in 2009, or how many species in total you caught during 2013. In addition, there is also a kayak fishing records database. The system also keeps track of your personal records, and the world records for the entire tournament. Knowing you are taking part in an interactive event provides far more "replay" value than traditional tournaments. I've had individuals say they really don't know what they would do without Kayak Wars - it gives them additional reason to be out on the water - it makes catches that much more special and meaningful.

As mentioned, Europe joined Kayak Wars for the first time in 2013 and took off in surprising fashion despite having been added late in the season. Large zander, trophy pike, and freak-fish such as conger eel contributed to the nearly 2000 tournament submissions from that part of the world. From the land down-under, Australia contributed with an array of snapper species, bream, and sharks some being very impressive. Puerto Rico, while not new to Kayak Wars, includes a loyal following of more than twenty teams who from their Caribbean angling paradise submitted many trophy tarpon and reef fish. A little closer to home, the rest of North America compiled for the majority of Kayak Wars action. Team MKF reigned dominant again in the freshwater division with 19,220 points, totally annihilating the competition with bass and catfish species. But with epic catches of sailfish and other pelagics, the true team champions of Kayak Wars 2013 was the Florida-based team "The Hunted" with an astonishing 21370 points. A big congrats to all who competed in 2013!

So what is in store for 2014? As in years past, Kayak Wars will continue to grow by leaps and bounds. There will be even more participants than ever before. The actual event dates are February 1st through December 14th, 2014. Registration will begin late January and continue through the spring time. Being a near year-long event helps cater to anyone who can only get out during limited seasons and schedules. We will also have the possible addition of various teams from South Africa along with areas of Asia that have recently expressed interest. It is actually entertaining to go through the website and see what others are catching from their side of the world. The more interaction we can present within this kayaking community will lead to an even more highly obsessed event. For years, the general image has been of a very respectable and honest contest. We kick out the factors of greed and implement a more fun schematic to the scene.

Since its humble beginnings Kayak Wars has thrived on the success of eager participants and supporters. It was founded upon the principle of just going out and having fun - with the possibility of being rewarded for amazing catches or feats. The interactive factor grabs a hold and keeps you keenly involved each time you are on the water. But there are many people to thank for the attraction this has caused. We are very fortunate to have some of the greatest sponsors in the industry supporting the event and providing prizes. While throughout its history I have done the entire running cost out of my own limited pocket, I am extremely fortunate for the gracious sponsors. Some of our loyal sponsors include Hobie Fishing, Pelagic Gear, Yak Gear, Sunjammers Watersports, Bending Branches, Yo-Zuri, DOA, and Grizzly Coolers just to name a few. Due to the generosity and gear donations of these fine companies are we able to provide countless prizes for the well deserving anglers of Kayak Wars. In 2014 we hope to see many new faces join the endless thrills, perhaps even yours!