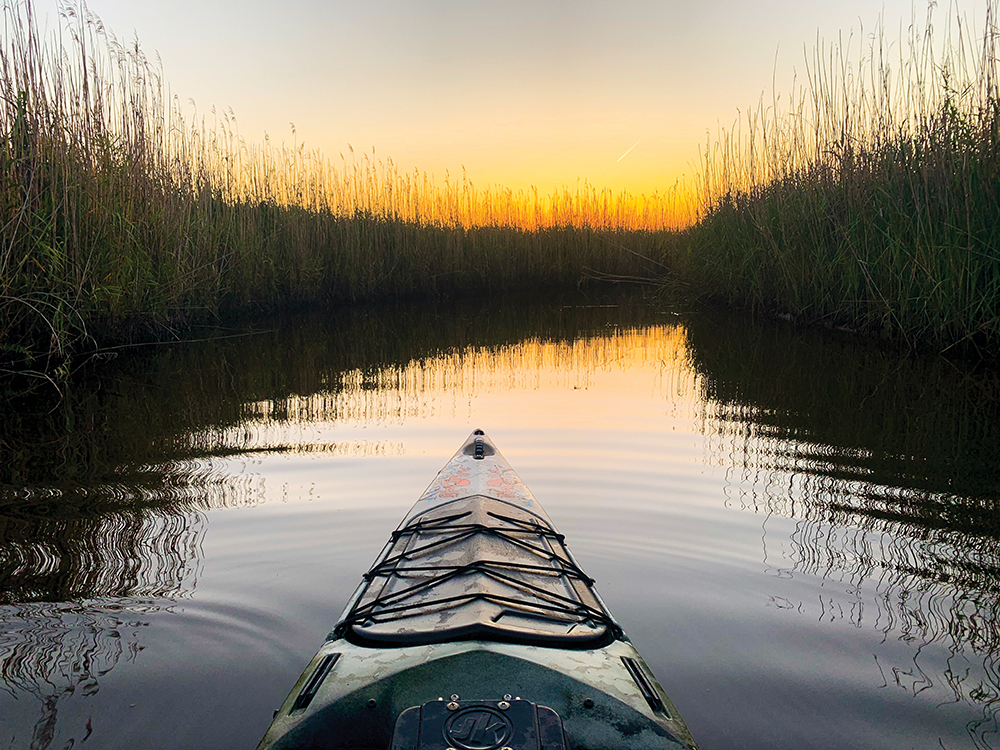 As the years pass, the experience of many days and years on the water become a blur, filled with countless fish, remarkable locations, and some fantastic people I have met along the way. On that timeline there is one day that stands above the rest and it really kicked my love for chasing redfish into high gear.

When I bought my first kayak years ago, a buddy from work also had one and we were trying to figure out the sport together. Blake came in one morning and told me he’d gone for an evening paddle to basically just explore some marsh ponds close to home. After weaving his way through a maze of channels he came upon a flat that was full of fish. He proceeded to tell me that he’d seen redfish with their backs out of the water as they crawled around in the mud. I quickly dismissed his claim and thought surely he was mistaken, or at least exaggerating just a bit. He reassured me that they were in fact redfish and that our next off day we needed to go fishing and check it out. Of course I was quick to oblige.

We hit the water at daylight and started to make our way to a backwater area that I had never been to. Let me say that it was then and still is one of my favorite paddling destinations. You weave your way through a long skinny channel that is almost completely overhung by tall cane on both sides. At the end of the channel it opens to a small flat. Sitting at the mouth of the channel on that first visit and staring across the water I immediately spotted three redfish in water so skinny that I could see their eyes. Needless to say, I was shocked.

We ended up catching one of the three and I remember the color and size of that fish, heavy and bright! As we continue on, we landed fish after fish in the span of several hours. The most I have ever seen or landed in any one place, then or since. Paddling back to the launch it occurred to me that I was ruined for any other type of fishing. Fast forward to the present, the one thing that has not changed is my addiction to sightcasting redfish in skinny water.

For two years we were able to go back there at any given time and catch fish. Then, for whatever reason, they disappeared without a trace. Our little honey hole had dried up. To this day I have no idea why they left, where they went, or why they quit using that area. Eight years passed and I would check the area several times during early summer in hopes of finding the flats full of fish again, but it never happened. I would leave each time reliving the incredible memories of wonderful days…but never seeing or catching a redfish. I chalked it all up as a disappointment, with a promise to return the following year.

So this year, as summer approached, I had a day off work and decided I wanted to do some fishing out of my normal haunts and routine. I thought since we have finally had a drier than normal spring season, very different than prior years of torrential rain and flooding, it might be a good time to go check out my old spot. Paddling in, the first thing I noticed was that the narrow channel had doubled in width. The banks are still covered in tall cane but not quite overhung the way it was on my original voyage. As I approached the first flat, I paused several minutes hoping to see the telltale splashing and wakes of redfish feeding in the shallows. Nothing!

I worked my way to the next set of ponds deeper in the marsh. The area looked even more promising, even though there were no definite signs of feeding reds. I started casting a She Dog into every corner and pocket where fish staged reliably in the past and it didn’t take long. The first strike was vicious as a healthy red came completely out the water trying to eat my lure. I set the hook and landed the first fish I have seen in that area in many years. I let her go and continued on in hope of finding more.

I didn’t go much further and I got another blow-up, but this time it was a much bigger fish. The near thirty-inch specimen was a fine sight to see so far back in the marsh. By this time the sun had made its way higher in the sky and I stood in the kayak hoping for some sightcasting action. The water was almost crystal clear, thanks to only modest rainfall and runoff during the weeks prior, and my expectations were high.

I was blessed for several hours, prowling the shallows and landing many sightcasted reds; the best part being that I saw at least twice as many as I connected with. The fish were back in my old honeyhole and I couldn’t have been happier. I didn’t harass them too badly and as the wind came up my ability to see them began to fade. I decided to slip out as quietly as I’d paddled in. Along the way toward the ramp I loaded my kayak with trash left behind by others. The thought occurred that it was pristine when I first paddled there.

From what it once was until now, so much of that whole area has changed. It was a great feeling knowing that a once productive spot has finally bounced back, proof that Mother Nature truly has a way of taking care of the natural world. It is an even better feeling knowing that the spot that originally sparked my passion is healthy and teeming with redfish again.