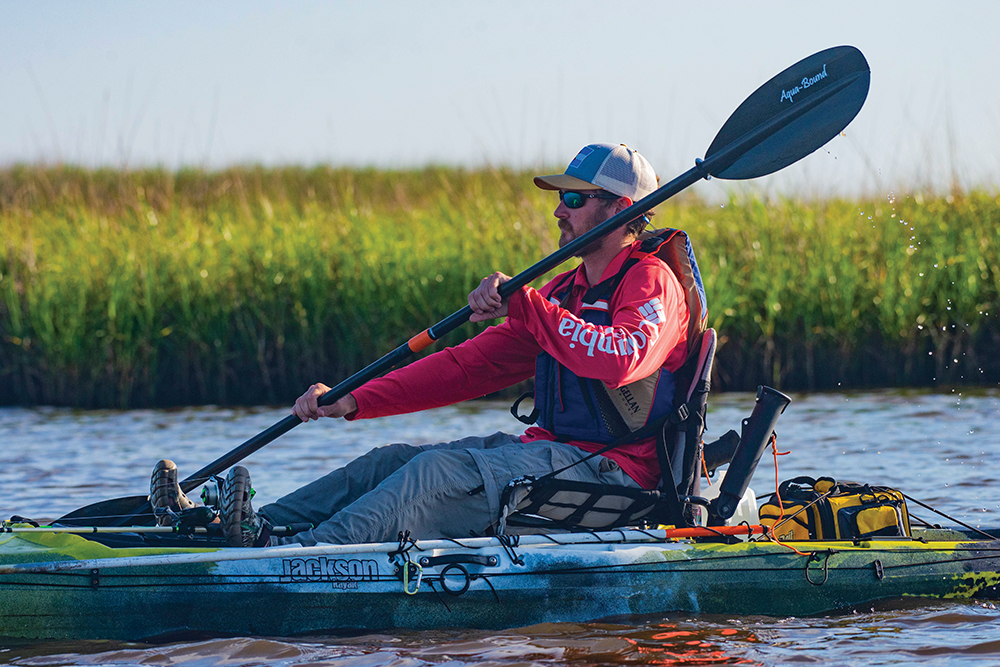 Paddling quietly along the grassy shore of a marsh lake is one of the best ways to find feeding redfish.

Time on the water has taught me a lot about fish behavior. Among these are seasonal forage preferences, where they go during low and high tide periods, and how they react to changes in salinity during rainy seasons. While fish can become somewhat predictable at times, it is important to recognize that their patterns change frequently; sometimes slowly, sometimes rather abruptly. The ability to stay with a pattern and predict their next move is a skill anglers can develop by being observant.

During conversations with other anglers, I am frequently asked what they were biting on and where did I find them. These are easy questions to answer as regards a specific day of fishing. However, when the questions become more general they become much tougher to answer. One question that has always left me stumped is, “Why are the fish NOT here?”

While on the face this might be a fairly simple question, let me elaborate on a situation with which I have consistently drawn a blank. A year or so back I was doing my usual scouting on Google Maps, searching for promising areas I had never fished. Studying a particular set of marsh ponds I decided to explore and investigate on my next outing.

The first time back there, I paddled a small slough that led to series of small ponds that would eventually take me to a set of larger, more open bodies of marsh water. I tend to favor the smaller, overlooked ponds. Upon arriving, I noticed the banks were lined with grass and that is always a promising sign. Working my way along I did not receive a strike or even a blow-up. Neither did I see or spook a redfish. I continued farther back, figuring to target the mouth of the main channel where it intersects a larger pond. I managed a pair of rat reds on a popping cork rig. I continued exploring, fully expecting to locate a school of feeding fish. Despite a thorough effort I came up short.

This area is beautiful any way you look at it. Decent tidal movement, access to deep water, structure, plenty of bait, and no boat traffic. To top it off it was mid-October, a time when we’d expect such a place to be stacked with fish. To say I was mystified would be an understatement. I chalked it up to an off day but kept it on my radar as a place to revisit on a future trip.

A few weeks back, I got the urge to go look at something different and I remembered that forgotten spot from the year before. I figured I would give it another shot. This would be my fourth trip there, the first three having produced similarly disappointing results but I still held hope for a better outcome. I called my buddy Wesley to see if he wanted to make the journey and he quickly obliged.

We launched at daylight and were greeted with the makings of a near perfect day. The beginning of an incoming tide and a slight southeast breeze, just enough to ripple the surface. As is our normal fashion, Wesley and I and split up as we entered each pond, with a plan to explore the shorelines and meet again to follow the slough into the next one.

We fished a large portion of the area thoroughly with nothing to show for the effort. Putting our heads together we decided to change our presentations in hope that it might change our luck. We paddled on, planning to not stop and fish until we spotted something promising.

Almost to the back of a large pond I discovered a large patch of grass surrounded by clear water. It piqued my interest and I stood in the kayak for a better look. I spotted a nice redfish, made a cast and hooked up instantly. Finally, a decent redfish! We hoped we were onto something but that fish turned out to be the only one that day.

Back at the launch we reviewed the events of the day and agreed there was no reason for the area to be so void of redfish. It’s so perfect in so many ways. Which begs the question; “Why not here?”

I fish many areas and can normally assign a reason why fishing might be slower than expected. Little to no tidal flow, excessive boat traffic, poor weather; the reasons can be many and varied. These I can comprehend. But when an area with prime conditions seems to never hold fish after so many visits leaves me puzzled.

It’s still fishing, though. And seeking the answers to why they do what they do, even if we may never fully understand all of it, is what continuously challenges us and draws us to the water.