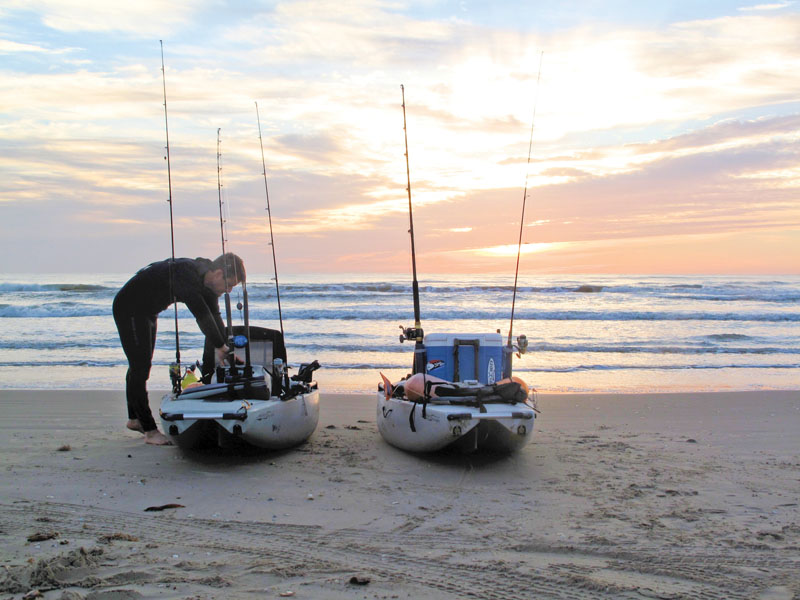 Offshore kayak trips should always include at least one partner.

As a mostly phenomenal fishing year draws to a close many of us are still amped-up and wish to continue the exciting pace. Much of my own personal action was land-based this year though I did undertake some offshore and kayaking trips. This past summer was very productive for my kayaking buddies who ventured beyond the breakers. Impressive catches of red snapper, cobia, and king mackerel topped the list. The unique cold-water upwellings during the heated months brought some unusual action such as the large dusky sharks that wreaked havoc on kayakers pursuing kings and snapper. More unique surprises awaited once cold up-wellings vanished. Another buddy had a whale shark encounter just a couple miles off the beach while targeting mackerel under the birds. To have a near 30' shark, curious one at that, inspect you sitting in a piece of plastic one-third the length of the creature itself must have been heart-pounding!

Kayak anglers were rewarded with exceptional cobia fishing as Indian summer developed. Cobia is one of my favorite fish to target from the yak and while not truly massive like sharks, you must exercise caution when landing and handling them. I've seen anglers pulled out of the kayak–gaffing what looked like a tired cobia. Swimming in shark infested water while holding onto a bloody, gaffed fish is never a good idea. For that matter, bringing any offshore species into the kayak can be dangerous. Small Spanish mackerel can sharply nip your leg. King mackerel can easily take off a finger. Dorsal spines are a threat, as on thrashing red snapper. While accidents of many kinds can and do happen, being in the company of other kayakers can greatly minimize the overall risk factor. For safety reasons, partnering up should be standard on all adventures beyond-the-breakers.

Safety cannot be stressed enough. An incredible example happened to a good friend who ventured out solo, late in the year, after snapper. The end of November and with the water turning cold, he had baits out behind the kayak and one got hit. An average-sized shark, probably a 5- to 6 footer. When the fish began to swim off my buddy felt the tension but the reel drag was not releasing line. The line had somehow become wrapped around the rod tip. Something had to give and the torque of the fish pulling on the rod ended up capsizing the kayak. My friend, swimming in uncomfortably cold water, was in panic mode. Unfortunately the rod was clipped into the kayak and the fish was dragging the kayak away from him. Luckily, the line eventually broke and with his last remaining strength he was able to recover his kayak. Had the line not snapped, there is a very good chance my friend would not be alive to tell the story.

So with safety covered let's discuss the possibilities that lie ahead this winter for the plastic navy. Depending on El Nio, we may or may not have a warm December. In the event we do, anglers can expect the possibility of solid sow snapper. Many oil platforms have unfortunately been removed, which sucks to a massive degree for the fish and anglers that utilize them, but there are many rocks, wrecks, and other "reef" structure peppered along our coast. Some are known to kayakers, most are not. With varying currents, more and more are being discovered (or covered up) each year. One thing I stress very strongly is that if you have a secret and productive location, keep it secret! Do not divulge this "gem of a spot" type information unless you want a crowd there on your next trip offshore. I've a buddy who discovered an uncharted wreck only a mile offshore, all on his own. I do not know the exact location and hope he never gives it up to me or anyone. As far as I'm concerned it is his and he should keep it private.

Again depending El Niño we may experience a colder than average winter. When the water gets too cold to chase cobia and snapper offshore in the kayak, another avenue opens up–bay fishing. I am traditionally not a bay fishermen, other than seeking rays for bait or occasional flounder; I am stuck on the surf. However, there are times when even the hardest of the hardcore relent and for me it is on the coldest days of winter. We have a very healthy bay fishery here locally and the farther south you travel the shallower the bays become, on average. The Laguna Madre averages only 2 to 3 feet in depth and during ultra-cold blasts things can get very interesting.

Water temps plunge as arctic fronts arrive. If fish do not make it to deeper water quickly, they could get physically stunned or worse, die. Red drum and black drum do quite well in the cooler water while sea trout often have to seek deeper, warmer places. When it gets stupid cold I will take my kayak to the bay (properly dressed of course) and seek out deep holes, channels, or other deep structure with soft plastics. Times like this, I usually get my biggest trout of the year. I vividly remember several years ago battling the elements throwing lures and I hooked into something massive. I fought the fish for a while to have it surface in clear water–a lunker trout. With some amount of grace and luck, I managed to land that fish. It was a fat sow trout taping out at 31.5" and when removing the hook I noticed this fish had another smaller trout lodged in its throat! That is about as "Jurassic Park mode" our bays get right there! And rightfully, the only time I have the desire to hit the bays.

Big trout are not my only interest on these super cold days. Giant schools of red drum will gather and run the edge of the flats picking off any stunned mullet or other baitfish they can find. You can often stay in a school for hours and battle them until your hands begin to go numb and literally freeze. The biggest flounder I have ever seen caught on rod and reel was landed on a day like this while targeting trout. And as with the redfish, the black drum will also school up tightly and will feed around the clock. This is an exciting time for fishing the bays but you must abide all state and federal game laws and restrictions. Within recent years, Texas Parks and Wildlife has enacted No-Fishing-Zones in certain areas if the temperatures drop too low. This is a bit frustrating in that it limits fishing opportunity but the law is the law. There are always other areas that will be fishable and quite possibly holding the inshore fish of your dreams.

The same as offshore kayaking, I highly encourage having at least one partner making the trip with you. Not only can it possibly save your life, getting into a mess of fish with a couple of good friends can be a heck of a good time!