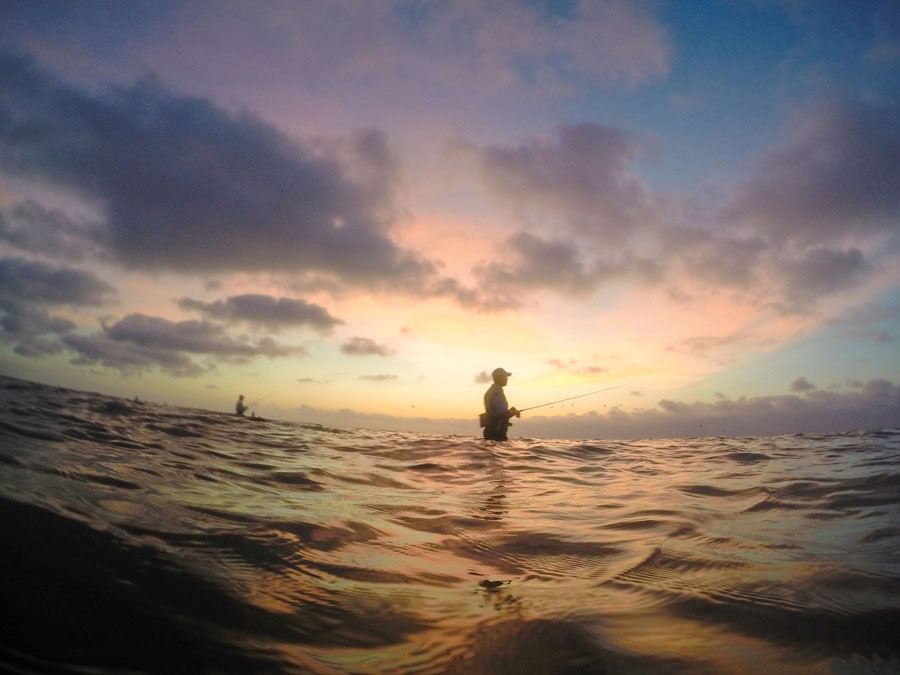 Unfortunately fishing is not my first job, so there comes a time when I have to put my hobby to the side and work a little more than I would like. I have been stuck working long hours and just about every day of the week. Despite being locked away from my passion, fishing is always on my mind. I cannot help but think about the tactics and fish I have caught in past summer months.

As we all know, Texas always brings scorching summer days but when timed right it can really work out to a kayaker's advantage. Due to the warmer temperatures in the middle of the day, I try to key in on fishing right at daylight and just before sunset. The topwater bite at these times can be nothing short of epic and can produce some solid trout, even wall-hangers. My favorite topwater is the MirrOlure She Dog in the glow or a Rapala Skitter Walk in a holographic bone and chartreuse color.

Late June, five years ago, a buddy and I went and fished a deeper channel that ran directly into the Intracoastal Waterway. We had our kayaks launched and were ready to paddle at first light. The horizon began to glow and we started our paddle to the center of the cut. We commence to drift parallel to the shore, chunking She Dogs as far as our reels would allow us. Not long into it my buddy hangs into a solid trout and I am not far behind him with a keeper. We continue to land trout after trout and the sun has not even crested the skyline. Not long after I get a blow-up and when I set the hook, my kayak started to move forward; an obvious sign that you have a good fish on the other side. She begins to pull drag and the first glimpse I get of her is when she decided to leap out of the water. She cleared at least two feet and was a silvery sight to see. After landing her she went 28" and I got a few pictures before I released her. We caught trout until you could feel a noticeable change in the temperature and just as fast as they appeared, they vanished without a trace.

The same time frame but the following year, I made a paddle out to the short jetty and found a small break in the wall. Again, I was there just before daylight; I could not even see my topwater land when I casted it but I could hear the trout popping it. I landed several trout just before the sun hit the horizon. I stopped getting blow-ups so I switched to my black and green Norton Sand Eel and picked up right where I left off. After a few more fish I then feel a thump and knew right away it was a better fish. As I set the hook she is already shaking her head at the surface. I fumble this sow around on the jetty before I can get her to calm down and lay long ways on the wall. She was so big that she would slide over the opposite edge by trying to pull her in sideways. I am by myself with no witnesses, no camera, no net, and no measuring stick. It was just me, a handful of lures, and my kayak. I butted her up to my reel and she was just shy of the second eye on my rod. I admired her for a minute in the rising sun before I sent her back on her way. I later measured my rod and the second eye was at 30". Looking at it now I probably should have had her mounted but the memory of that fish is far better than anything hanging on my wall. I came that morning just to catch fish and so I did. That was one of the best days of fishing I have ever had and I will always remember it. Not too many people believe that story but that is fine with me, it is forever locked in my memory.

My one and only day I have had off in a while I spent down on the coast line. I sat with a strong south wind blowing salty air into my face while watching the waves churn and crumble at my feet. I know the Texas wind is relentless but there are a handful of occurrences during the summer that the wind changes out of the north. When this happens, the surf is almost glass and can make for an incredible day of fishing. If you are able to go, the second day of the north wind is the day to be there for the trout. The water has calmed just enough to be sandy but not enough to be crystal clear. In my opinion, I feel like the baitfish have the advantage from predators when the water gets to a certain clarity–the trout know that too.

I will start the morning throwing a topwater for the first hour and then usually will switch to a soft plastic or a MirrOlure Catch 2000. I typically will have my kayak tethered off to me or anchored near me. The reason being, I keep my cooler there so I won't have to have a stringer full of trout attached to mesharks can be a big problem when wading the surf. Also, the thing about the surf is that when you hang into a fish, you are never certain of what exactly is attached to the other end of the line. I have had surprises such as skipjacks, jack crevalle, and even tripletail. With an ideal day on the Gulf Coast the opportunities are always endless and that is where you can find me when the time comes.

The itch of getting on the water grows more and more every day. I am constantly thinking of what and where I would be if given the opportunity. I like to think I would be back at Sabine Lake on a day where my reflection is just as visible as the scattering of nervous mullet. The sound of a knocking topwater and the sight of a trout shattering it is an everlasting image that I hope to replay soon.