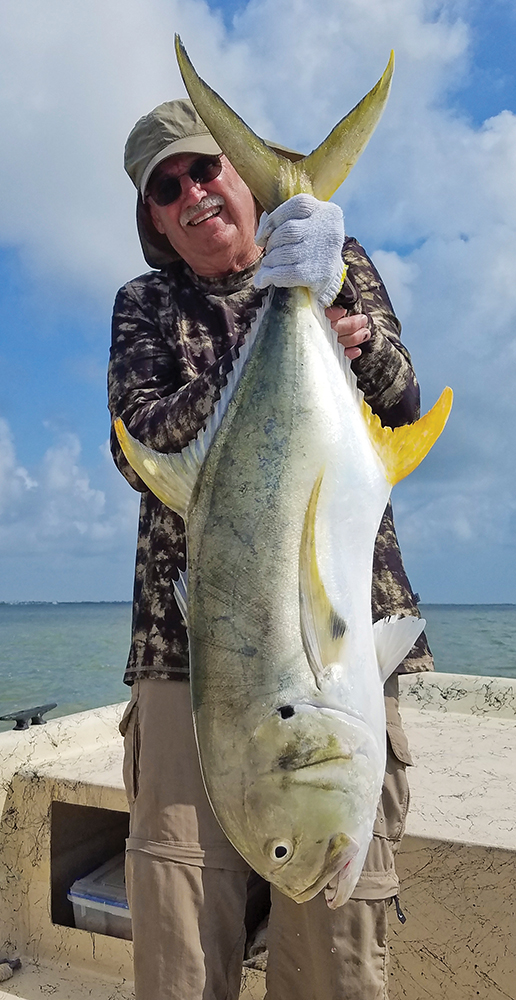 Jackfish are fun to catch. Watching several compete for a topwater is awesome.

August is easily one of the best months to fish the Texas coast. The heat is on and not just the air temperatures. Fishing is HOT for a variety of species. Some of my best trips of the year come this month, mainly due to the calmer weather.

Calm conditions that lack cooling winds actually intensify the effects of heat. Since fish are coldblooded and immersed in water, they typically lounge and feed in cooler, deeper waters.

The jetties are a great area to beat the scorching August heat, at least for the fish. The ever-present tidal exchanges from the Gulf of Mexico, and the deeper waters located along those rock walls, offer an enticingly cooler habitat for our finned friends.

These cooler waters will often concentrate schooling fish and actually increase their appetite. Many of my August days will be in deep waters away from bay shorelines and near the gulf passes.

Years with minimal fresh water inflow during springtime make for a magical crab migration in late summer. I’ll be looking for swimming blue crabs on the surface, migrating to the gulf, riding the ebbing tide. I’m not looking to harvest them, being that it is illegal to possess (or use for bait) females with aprons detached. The fish do not follow these rules though. Many protein-rich egg-laden females will never make it past the jetty entrance to the gulf.

Bull reds are the main species that hunt these tasty morsels. It is no surprise when a large tarpon, jack crevalle, or various shark species join the reds to partake of the bounty. The big reds often work in packs of 3 to 5 fish in a hunting party and attack with gusto. Quite often the attacks can be seen from a distance and even the sounds of reds crunching on crabs can be heard when in close proximity.

This is definitely a sight-casting/hunting style of angling. Most floating topwater lures will work when you see these fish riding the tide lines searching for an easy meal. For accomplishing healthier releases of these bulls I recommend removing all but the rear hook on the plug, even changing to one single hook when possible. Coincidentally, that toothy patch in the throat of the redfish is designed for this type of dining. Try not to let the fish swallow the lure, set the hook the instant they grab the plug. I like gold or brown colored lures to better match the hatch. Fly fisherman definitely have an edge by being able to mimic the prey almost exactly with hairy creations.

The bay water is most likely warmer this month than any other during the year. The thin-skinned trout like cooler surroundings, so deeper waters oblige. Spoil islands near the ICW or any major channel can spell relief to the heat. Look for steep drop-offs near the channel. Some spoils hold oyster which is a bonus feature to the main spoil bank structure while others may be only a shallow ridge.

Deep oyster reefs in the bays harbor cooler water with increased water flow around the structure. On windy days, fish farther away from the shell making long casts to keep the boat hull splash from spooking fish. Live croaker is king in these areas, free-lined or fished Carolina rigged with just enough weight to get the bait heading deep without getting hung in the shell. I typically start with an 1/8 ounce egg weight and adjust from there depending on current velocity.

There should be plenty of days in August when we can run to the surf. Waiting on our arrival are plenty of predators searching for prey. Variety is the norm here and being rigged and ready for them is one of the primary keys to success. Trout, redfish, pompano, and Spanish mackerel are my main targets.

Trout love a lively nose-hooked croaker or pigfish. Rig either one on a Carolina rig with a 6/O hook and a 1-ounce egg sinker. Fish in the second and third gut for best success. For slot reds, sling the live bait up into the first gut and hang on.

For the Spanish mackerel and pompano, many of the same lures can catch both. Pompano prefer a lure to be hopped across the bars, spitting up puffs of sand as it is reeled. The Spanish like a fast moving lure near the surface between the guts.

White or yellow colored tandem Spec-Rigs and silver spoons are deadly at the beach’s sand bars. These same lures are also effective when chasing Spanish mackerel and little tunny nearshore and near the jetty channels.

If the fish are short striking at the lures, speed up the retrieve until you are hooking up. These fish have keen eyesight, a quick retrieve gives them less of a chance to look it over before closing the deal.

August is the month with the most species available in our nearshore waters. Many times the calmer weather conditions provide exceptional water clarity and offshore currents push closer toward the beachfront. Often true blue water will be found inside the Texas state water boundary.

Offshore current seams are my favorite structures to target, you never know what you might catch. I like to troll deep diving lures and a spoon on the surface while working the current line with the clearer water.

No matter where you fish this month, please be safe and consider the effects of direct sun and elevated temperatures. Dehydration and heat exhaustion are very common on the water, remember to drink plenty of fluids and wear light-colored clothing.