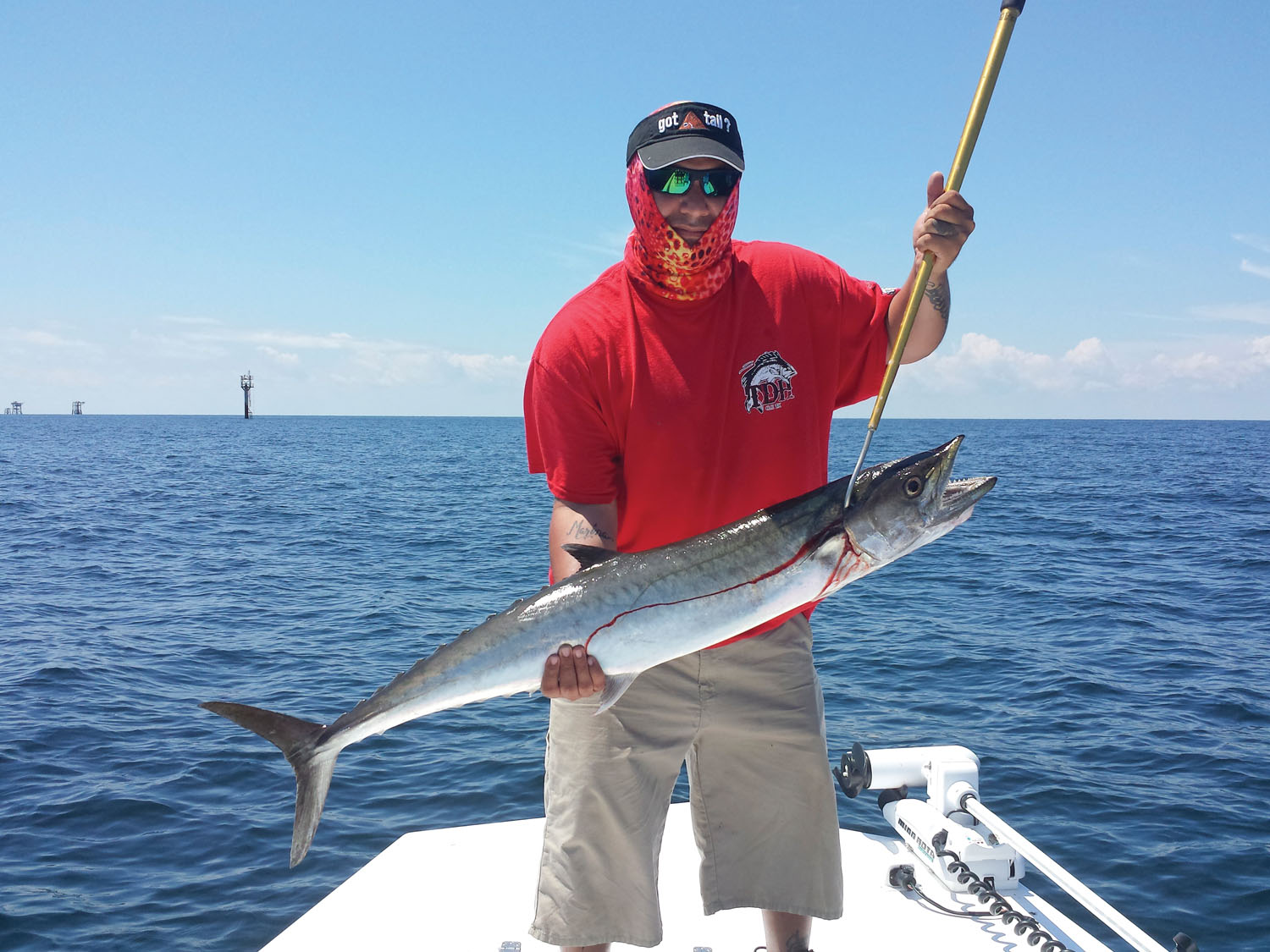 George Gomez enjoyed the fight. Kings like this should be plentiful in June, nearshore and also around passes.

The big news this month is the opening of the gulf red snapper season in federally-regulated waters beyond nine miles. Much to the chagrin of private recreational anglers, the 2016 season is scheduled to be the shortest-ever on record. At a mere nine days, the season opens at 12:01 a.m. June 1 and closes at 12:01 a.m. June 10. This season will include only one weekend, June 4 and 5, for the participation of your average private-boat anglers.

Federally permitted recreational charter-for-hire season will run June 1 through July 16. Both recreational seasons will have a federal-water red snapper daily bag limit of 2-fish with a 16-inch minimum length.

Historically, the federal fisheries managers have split the allowable annual harvest with the larger half going to commercial fishermen. This year they decided to tilt the hat slightly toward the recreational anglers, allowing us 51.49% compared to 48.51% for the commercial sector. The commercial fishing vessels have a 365-day fishery in federal waters to fill their quota.

The exact wording, explanation of annual catch limits and summary of NOAA's Southeast Fishery Bulletin (FB16-028) is available at http://sero.nmfs.noaa.gov/.

I have read the summary and personally I am disappointed for the very few days allowed for the recreational private angler compared to the commercial sector's bounty. On the other hand I am glad to see that the boats which are federally permitted for-hire will have a few weeks to catch them. Per the requirements of their limited-entry Reef-Fish license they cannot target red snapper in Texas state waters.

This 365-day state-water red snapper season is the basic reason for separation of the seasons for private and for-hire fisheries. The feds penalize the private anglers for their ability to harvest red snapper at will in state waters year around. Like it or not that is what we have to work with.

Out of curiosity I decided to contact two friends with federal permits, Wayne Timmerman and Matt Jensen, for their take on the seasons. Coincidentally both said they have not relied on targeting red snapper in the past. The previously short seasons have never been something to rely upon. Last year's extended season for the federally permitted vessels came as a welcomed surprise being that it was a last minute decision. Plans for each and every season can change and the feds can close the season at any time if they believe that the allotted quota has been fulfilled.

Capt. Wayne Timmerman operates Empire Lodge in Port O'Connor and captains the 60' Hatteras sportfisher Honesty. He said it was great that they have 46-days to target snapper this year. They have booked some trips for targeting red snapper specifically but, the boat is more designed to provide ultra-comfort while running to the 100-fathom curve and beyond. "Out there we target marlin, sailfish, tuna, wahoo, swordfish and mahi-mahi. Yes, on the way in we can try for grouper and limit on snapper in just a few drops. There are so many out there, limits are guaranteed."

Capt. Matt Jensen operates Coastal Bend Charters, also hailing from Port O'Connor. He captains the Nauti Kat, a 28-foot Pro-Kat powered by twin Suzuki outboards. He makes daytrips targeting a variety of fish but never relying on snapper alone. "To get as many bends in the rods as possible you need to target variety. Sure, some red color always looks good mixed in with a nice box of wahoo, dorado, grouper and tilefish. But if a snapper specific trip is booked we normally get a mix of mackerel, ling, beeliners or possibly some great eating African pompano. Four fisherman can really fill the fish boxes on these trips."

Welcomed this month will be the return of many migratory species nearshore and within reach of the average small-boat angler. King mackerel, Spanish mackerel, cobia, little tunny and tarpon will be riding swift currents toward the beaches. The strong current flow near the passes and ship channels that lead to the gulf will concentrate baitfish for them to feed upon.

In the TSFM June 2015 issue I outlined some strategies for targeting these species at the jetties. Check out archives at www.tsfmag.com. To keep repetition to a minimum, I'll hit only some key information:

* Choose days with increased current velocities for best results. Days preceding and soon after the new & full moon phases have the strongest and longest duration of tides.

* Concentrate your efforts on the inside of the channels on an incoming tide, working with the water flow. Move to the outside of jetties/passes working the obvious water color changes formed from the ebbing tide.

* Find and fish the current seams and color changes in and around jetty rock outcroppings or natural passes. These areas concentrate the schools of baitfish that in turn attract gamefish species.

*For kingfish action, try trolling a variety of deep-diving lures, surface plugs and spoons, with the current flow. For natural bait, ribbonfish is one of the best. Try drifting baits with the current, free-lined without weight and also weighted in varying amount, to seek fish at different depths within the water column.

June really heats up when the tide drops out early in the month and the sun tries to boil the shallow water. As the tide level falls during the daytime so does the bait off of the flats. Reds cruise the primary drops-offs, moving up on and down off the shelf. Nearby sand pockets and shell beds are great areas to soak some cut mullet, live pinfish or Spanish sardines. Take plenty of extra bait to change out often and to also use for chumming the area. Chopped sardines and menhaden make the best slicks.