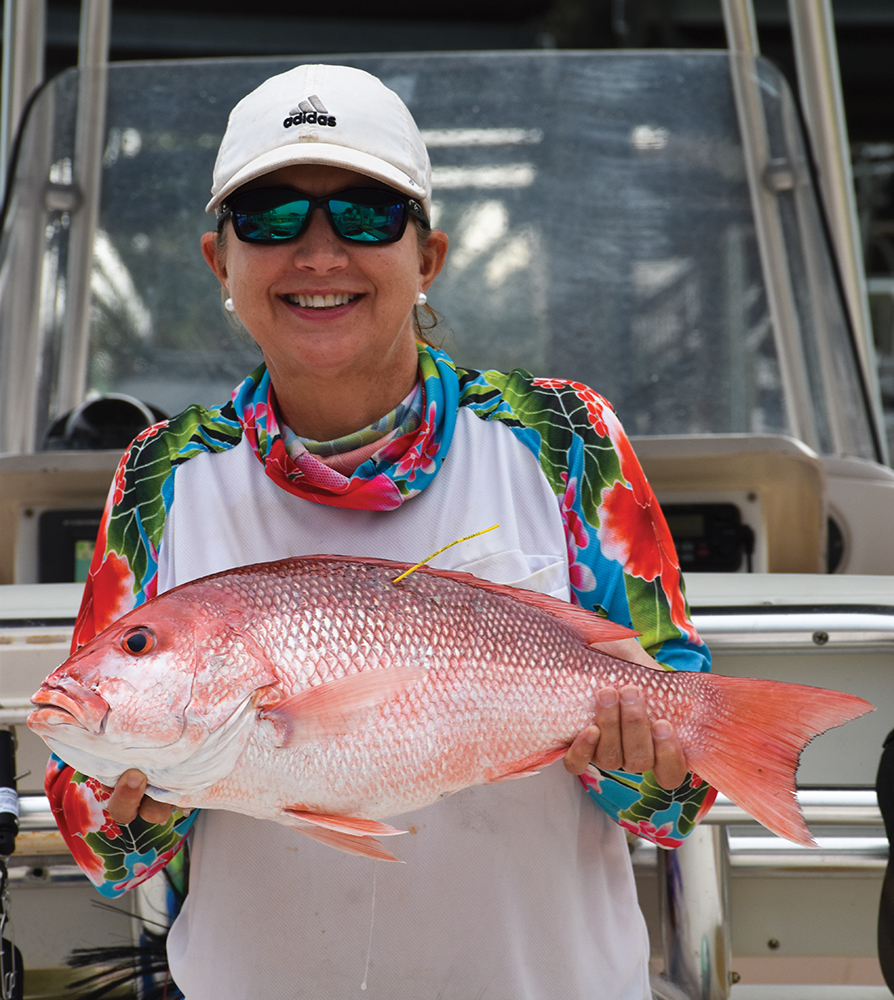 Back at the dock; Kelly was very pleased with her tagged red snapper. Heck, for $250, who wouldn’t be?

What do you do when friends invite you offshore during snapper season? Well, when the seas are predicted to be less than two feet and the red snapper are biting like a bunch of piranhas…you go!

Pam and I joined Chris and Cindy Hanson and other guests the last Saturday of June aboard their 30-foot Grady White out of Port O’Connor. Chris had been out several times prior and enjoyed a great snapper bite. Limits of ten pounders…some heavier. Hell yeah we wanted to go!

The 35 mile trip to the rock formation Chris had been fishing took slightly longer than an hour. The twin-250 Yamahas purred like kittens and the Grady glided across the gentle swells like a new Caddie on the Grand Parkway. Chris owns a great boat and is diligent in maintaining it.

I hadn’t been snapper fishing in twenty-something years, having long ago sold my old offshore rig. What I witnessed on that trip was nothing short of phenomenal – compared with past experiences.

We fished jigs, if you could call it that, there really wasn’t much jigging required. Every time a line was dropped to the bottom and reeled up a few feet – if you hadn’t already hooked a snapper, just pump the rod a few times and hang on.

Pam grabbed a rod while I manned the camera. Before I could wipe the fog from the lens she had one coming alongside.

Up on the bow, Kelly Waters was bringing up her first snapper when the rod suddenly bowed even deeper. She had a double.

Now I was very accustomed to double hookups, back in the day, fishing double-drop rigs around platforms with squid and cigar minnows. Small fish mostly, and lots of culling to reach a limit. But Kelly was using a Snapper Slapper. Beat all I’d ever seen!

Given the rapid bite and the two-fish red snapper limit, it probably took less than an hour, even with taking turns on the rods and motoring back around to drift the most productive part of the structure. Our crew of nine put 18 snapper on ice quicker than I’d ever seen. Incredibly, the snapper on that rock were so abundant that we caught nothing but snapper, all solid fish.

We also took time to get to know the SeaQualizer I’d brought as a gift for Chris, releasing several fish equal to the ones we were keeping. I was curious how it would work. Everything you read about using a descending device such as the SeaQualizer is true.

It’s really easy. Attach a three pound weight to the SeaQualizer that is attached to a dedicated “release rod” (large spinning rod works best). Adjust the device for half the depth being fished – snap the device’s jaws on the lip of the fish to be released – open the reel and let the weight take the fish back down. The jaws pop open as it descends to the preset depth and the “recompressed” fish swims away. No questionable venting and no fish wasted. If you fish for snapper or other reef species you definitely need a SeaQualizer. (Learn more at www.seaqualizer.com)

If you look closely at the photo of Kelly showing off her double, you can see one of them is wearing a streamer tag. But as luck would have it, we were so excited and busy celebrating that nobody noticed the tag as it went in the ice box. More on that later.

Finishing our snapper limit, we drifted happily away from the snapper rock and brought out snacks and cold drinks. A great day so far, with more to come.

Chris suggested we might want to troll a weedline we’d crossed several miles before reaching the snapper spot. Baitfish and signs of feeding activity were plentiful and we had it all to ourselves. It didn’t take long before we had lines out and reels screaming. Chris knows his stuff.

The highlights along the floating sargassum was a mahi-mahi of more than 20 pounds, a surprise of a wahoo, a barracuda, and enough king mackerel to make everybody’s arms ache. With temperatures nudging the century mark and little breeze, the boat ride back to port sounded inviting. We rolled up the lines and left them biting.

At the dock, we arranged our fish on the planks for a photo when somebody exclaimed, “Hey look! This one has a tag!”

Kelly chimed in that she had noticed something on one of her double-fish but paid little attention at the time. Turns out she had landed one of 4,000 red snapper that were tagged and released for fisheries research prior to the opening of the season.

The Great Snapper Count, funded by the US Congress and headed by Harte Research Institute for Gulf of Mexico Studies, is a program aimed at discovering the absolute abundance and movements of gulf red snapper. Another goal is to better understand post-release survival of the species.

The release of 4000 tagged red snapper was conducted at hundreds of sites across the Gulf of Mexico, 10 fish per site, on natural and artificial structure between Brownsville, TX and Key West, FL. Red snapper weighing between six and eight were primarily targeted.

Landing and reporting a tagged fish per the instructions printed on the tag can earn lucky anglers $250. Some of the tagged fish were given two tags, making them worth $500. Kelly’s fish had a single tag, but she was none-the-less elated to qualify for the $250 reward. During the month of June a total of 197 tag recoveries were reported.

June will be remembered as a great month for Texas red snapper anglers. Quite uncharacteristic of the first summer month, the winds were mostly light and seas averaged less than two feet many days. And plenty of snapper were landed by recreational anglers.

Under agreement between Texas Parks and Wildlife and Department (TPWD) and the National Marine Fisheries Service (NMFS), the 2019 red snapper season in Gulf waters beyond the Nine Mile Texas Territorial Seas boundary, was established under an Exempted Fishing Permit (EFP) to commence June 1 and projected to continue 97 days.

The 2018 82-day season, also conducted under the two-year EFP, was the model for projecting 2019 season guidelines. Last year’s harvest data, combined with the continued rebound of the fishery, led to a longer season for 2019 and slightly greater harvest allocation of 265,090 pounds.

If everything falls in line with the projections, Texas anglers will be allowed to fish all 97 days. In the event that angler participation and prevailing calm conditions might contribute to achieving the 265,090 pound allocation in fewer than 97 days, the season could be shortened. However, according to TPWD and researchers at Harte, the probability to allow the full 97 days looks promising so far.

One of the key elements upon which researchers and fisheries managers are staking the accuracy of their projections is the voluntary reporting of red snapper landings via iSnapper. The historic general lack of recreational harvest accountability has long been a sticking point and played a significant role in NMFS granting the recreational sector very short seasons in prior years.

iSnapper is an electronic app that can be used from iPhones and other mobile devices to file trip reports. Participation thus far in the 2019 has been very encouraging, says Dr. Greg Stunz at Harte Institute. “The reports filed and data collected is running well ahead of 2018. A very good sign that greater numbers of snapper anglers have bought into the ‘citizen scientist’ aspect of the program and are willing to share harvest data that will provide a basis for continued longer seasons and higher allocations of the fishery for Texas anglers.” (www.sportfishcenter.org/outreach/isnapper-app)

Texas has a great red snapper fishery that lies within easy reach of the small boat fleet on calm summer days. The fishing Pam and I experienced recently was so good that this old trout snob is actually considering jumping back into the offshore game. Oh my…another setback for my retirement funds!