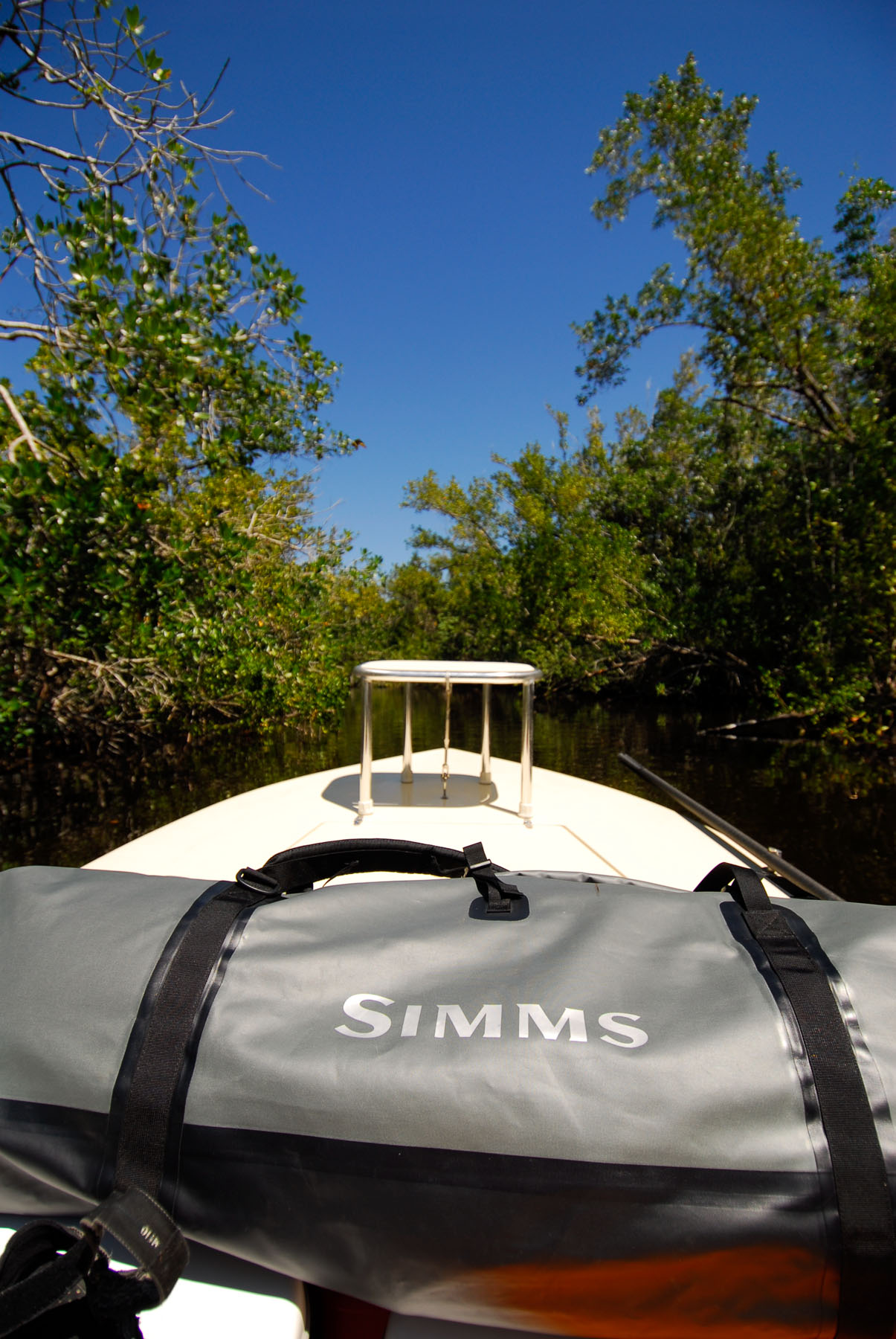 The old bag on one of its earlier trips into the Glades backcountry.

An old saying declares that you get what you pay for. Some may not put much stock in this bit of advice but I surely do.

This past summer, while hurriedly ramming gear into my Simms roll-top duffel for the return trip from Africa, the old bag sprung a leak or, to be more precise, burst at one of its seams. This threw me into full-blown panic mode wondering how I would get all my gear back. Fortunately, an old bushman with a rusty needle was able to sew it just enough to get it through all four flights. The old duffel finally gave up the ghost entirely, busting another seam as I struggled through the door, spilling its contents onto the kitchen floor. Now this might not seem like a good product endorsement. However, if you knew what the bag had been through over the years, you would think otherwise.

I purchased that giant duffel bag just prior to my departure for Belize in November of 2003 because I needed a bag big enough to carry not only my clothes and fishing stuff, but also a sizable collection of camera gear. Since that trip, the bag has been not only to Belize and Africa, but to Mexico four or five times, Hawaii twice, Canada, up and down the Eastern seaboard, into the Everglades annually, and has ridden in the back of my truck back and forth from Lake Jackson to my fish camp in Seadrift more times than I can possibly imagine. And, to top it all off, it was loaded right to the 50 pound max every time I checked it with the airlines. Finally retired, it is one purchase that I can truly say gave me back every penny I spent.

So… just the other day I was looking at that worn out duffel trying to figure out what I might be able to do to coax it back into service. It just is not going to happen but, hey, it got me to thinking about the concept I am writing about here and, well, it got me into looking at all of my gear in a whole new way and wondering- what else do I have that has truly served me way beyond my expectations.

Well, let us see, there is of course my old Simms Guide Jacket that I have been wearing for over twelve years, my very first Stiffy Guide graphite push pole that I have been using for eleven years, a pair of Van Staal titanium fishing pliers that I have been using since '97, a Pelican case that I have kept camera gear in since I first picked up a camera in 1997, an old G Loomis Pro 1 eight-weight fly rod that is well over seven years old and has been in my skiff every day since I got it or how about the little old 25 hp Yamaha that I have used at least 150 days a year for four years.

Now, in the interest of not making this all about me, I decided to talk to other reputable and seasoned guides and anglers to find out what gear they have that has far exceeded their expectations. As you read on, I am sure that you will notice that a couple of brands seem to stand out. I purposely went to others in hopes of this not happening but, it did.

Before I get to discussing the items, I will tell you that the only criteria I gave everyone that I talked to was that it had to be something that is still in production or at least, a very similar item from the same manufacturer can still be purchased.

My first call was to fellow skiff guide Tom Horbey. Tom was fly-fishing the Texas Coast before fly-fishing was cool and long before he became a guide. Anyway, Tom is pretty proud of an old Billy Pate reel that he purchased back in '83, stating that he still uses it occasionally and has even put it in the hands of his sports from time to time. The other product he mentioned was the Boga Grip - no surprise considering that I have had equally great luck with mine.

Next was my great friend and mentor Chuck Naiser of Rockport. Chuck was quick to talk about a pair of Patagonia long-underwear that he happened to be wearing on that very blustery November day. "I have been wearing these things for over 15 years," he told me. "My wife has wanted to throw them out on several occasions but I just haven't been able to let them go." The other item he mentioned was his Forschner fillet knife. "It takes and holds a great edge. The damn thing has the best blade ever."

Moving on, I gave Mike Barbee over at Fishing Tackle Unlimited a call wondering if he might be able to share a little from the perspective of both angler and retailer. The first thing that came to his mind was one of the original pairs of Simms breathable waders and his old Simms Guide Jacket. Both have been in service more than ten years. In addition he mentioned a pair of Van Staal pliers, and then offered this comment, "The one product that leaves this store and I have never heard a single complaint about or seen returned is the original Boga Grip. They're just bullet-proof."

Legendary guide Jay Watkins had almost the same sentiments regarding his Boga Grip and even greater praise for his, now get this, Simms Guide Jacket. Jay also added Costa Del Mar sunglasses and MirrOlures into the mix. "I am still using 52M MirrOlures that I fished with before I started guiding," he told me. "Talk about quality."

Last but not least I spoke with good friend Ethan Wells who does the skiff guide thing from the Coastal Bend of Texas down to the Lower Laguna Madre and even takes his show on the road to Florida every year. Surprise, surprise… the first thing out of his mouth was the old Simms Guide Jacket and he even mentioned his original Simms WindStopper jacket. "But, probably one of my oldest pieces of equipment that I still occasionally use would be my first Stiffy push-pole," he added quickly. "It broke on me once but Kevin patched it up real good and it hasn't let me down since."

Now I know this piece is probably coming across like a giant Simms ad. Actually, I thought that wouldn't happen if I included enough others but, oh well, it did. I'm OK with that given the caliber and reputation of the guys I included in my survey and also because I believe the folks at Simms strive to turn out great products. But, there is a point that I wanted to make and that is…You get what you pay for!

All the brands mention above are considered by many to be "pricey" meaning, there are less expensive alternatives and knock-offs out there for the more frugal consumer. The problem with some of these more economically-priced goods is that they may not provide value for money. Sure, I can go down to any big retail outlet and buy similar goods at half the price, and maybe get a year or two of service. But then I'd probably have to deal with product failures more often, and in case you haven't noticed, you cannot always count on having a bushman with a rusty needle handy when you need him.