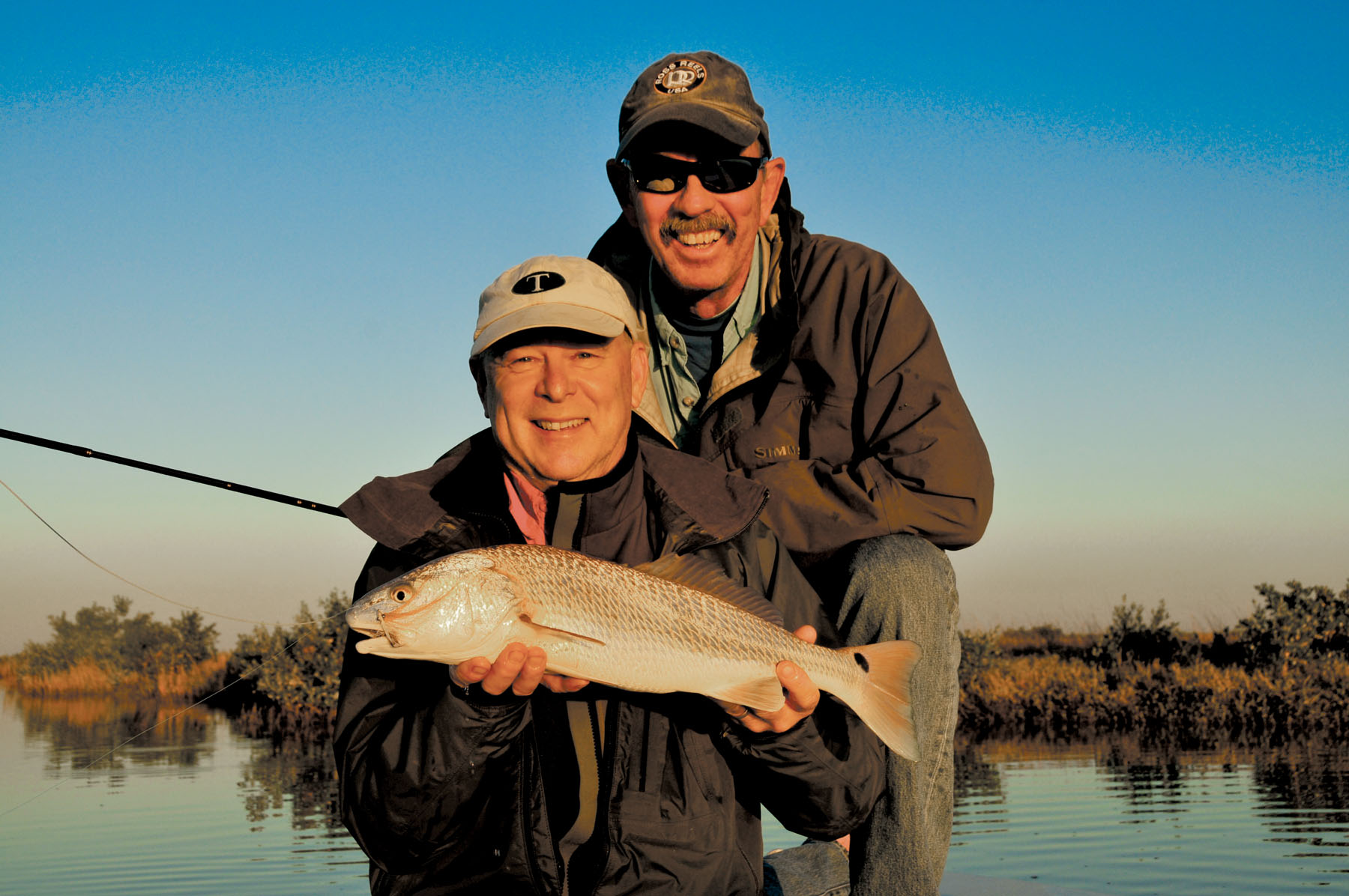 Chris and Mike Barbee on the last outing we were lucky to share.

The fishing community of the Texas Gulf Coast was saddened earlier this year at the news of the passing of Capt. Chris Phillips.

Chris, who is often credited as being one of the first, if not the first to popularize saltwater fly fishing in Texas, was born in Port Arthur, TX on August 17, 1947 to Charles and Helen Phillips. After graduating high school, he then attended LSU in Baton Rouge, LA. He then resided in the Houston-Galveston area for the remainder of his life working as a home builder first and then as a fly fishing guide.

Throughout his guiding career, Chris could be found working three days of every week in one of the local fly shops, starting out first at Angler's Edge, then Westbank Anglers and Fishing Tackle Unlimited where he ran the fly department. It was in this capacity that Chris left his biggest legacy in that he introduced hundreds upon hundreds of anglers to his love of saltwater fly fishing.

Chris fell in love with saltwater fly fishing in the early 70s when he started going to the Florida Keys to chase tarpon. It was there that he learned his skills along side such fly fishing and light tackle pioneers as Flip Pallot, Jimmy Albright and big tarpon guru Billy Pate.

As the first president to the Texas Fly Fishers, a chapter of the Federation of Fly Fishers in Houston, Chris shared what he learned and told countless stories that fueled the passions of many soon to be dedicated salt water fly fisherman. And, he often credited his affiliation with the group in his decision to become a fly fishing guide, a career change that prevented him from taking his annual trips to the Florida Keys yet benefited countless Texas anglers as he became available to share his love and knowledge of the sport.

At a great loss to the saltwater fishing community, Chris lost his battle with cancer on January 7, 2010. He was in the company of his loving companion Iva Doyle, his family and a great number of friends who diligently sat by his bedside in his final days.

On a more personal note, I can still remember the first time I had the chance to fish with Chris. I had known him for a few years and we had always talked about getting together to fish but, there was always something getting in the way. It was August of 1998 when I received a call from a friend, Jay Hoffman, asking me if I would like to accompany him on a trip that he had booked with Chris. I graciously accepted and a couple of days later we were meeting the good Captain at the Texas City Dike to head offshore for a day of fishing.

Luckily it was one of those perfect days that we all hear about. In fact, the roughest part of the entire boat ride was crossing other boats wakes as we departed the Galveston Ship Channel. The day was a huge success. We caught cobia, kingfish, Spanish mackerel, red snapper and more dorado than a person could shake a stick at or, in our case, a fly rod. It was a special day to say the least. Not only did we catch a boat-load of fish but, it helped solidify a friendship that would last until the end. Sadly, it was not until he was diagnosed with cancer that we had the opportunity to fish again.

When, I heard of Chris's ailment I knew there was only one thing to do and that was to get him out on the water so, I gave Andy Packmore, a mutual friend and co-worker of Chris's at Fishing Tackle Unlimited a call only to learn that everyone was three steps ahead of me and that a weekend escape had already been planned. Needless to say, I was only available to fish the first day but what a magnificent day it turned out to be. Chris, Cory Hawryluk and I had the chance to share my skiff for the day and not only caught up on all the stories and things that good friends talk about but, we caught the hell out of the reds.

Then again, a year later, I had my last chance to spend a day on the water with Chris. In fact, in retrospect, I wish the fishing had not been so damn good. You see, on that day, another one of our many mutual and great friends, Mike Barbee from FTU joined us. So, not only did I have two great anglers on the boat, but the fish were ridiculously cooperative. By noon, we had landed close to 30 reds and had all decided to call it a day. Damn, if only the fishing would have been a little slower, that last day on the water with my friend might have lasted a bit longer. How selfish am I? I suspect no more so than anybody who has lost a dear friend.

Well, I consider myself very lucky to have known Chris. He shared his stories and his knowledge with me and more importantly, we shared a lot of great friends. These friends, who remained by his side until the very end, are the finest of people and not only share a love of fishing, but of friendship as well. We often talk about the legacy a person leaves behind. Well I am going to have to say that Chris's legacy, at least from my point of view, is that he not only taught people how to fish and how to love fishing but, he also brought so many of us together and created friendships that will last forever.

We will miss you my Friend!

A celebration of Chris's life and legacy was held at Fishing Tackle Unlimited on the Gulf Freeway on January 23, 2010.