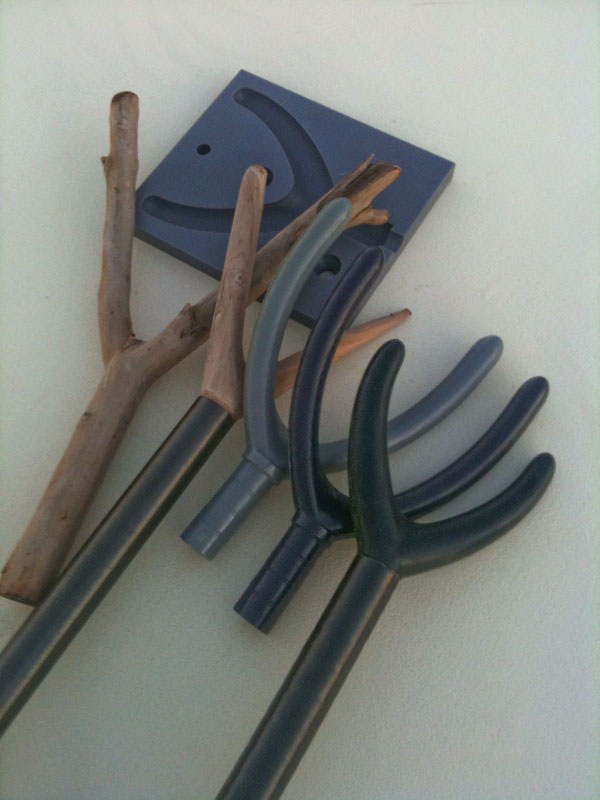 With prototype Skiff Gear fork in foreground, this photo shows the evolution of the project.
I have dedicated my life to fishing. In fact my dedication, or some would call obsession, has been taken so far to the extreme that it has gotten in the way of friendships and even relationships. And, while many think I am crazy for it, I am completely okay with it. Thoughts of fishing, or some aspect of it, have filled my mind and fueled my dreams for as long as I can remember. That could not be more evident than in my latest project.

Several years back I had the pleasure of sharing a skiff with a mentor for a day of fishing in Florida. Before launching his skiff I noticed that he had an unusual looking wooden fork on the end of his Stiffy push-pole. I asked him about it and he explained that it was made from the fork of a guava tree. "This was what we used in the good 'ole days when we were still poling skiffs around with old pole-vaulting poles that we would get from the high-schools and colleges when they were no longer any good for vaulting."

Being the gracious host, he offered me the bow as he climbed upon his perch on the platform while continuing my history lesson and explaining why the fork of a guava tree was superior to other woods but also as to what other trees offered suitable replacements in a pinch. He also explained the process from choosing a good fork and curing it quickly all the way down to shaping it and attaching it to the pole. But, outside of the nostalgia, I did not truly appreciate the primitive device until it was my turn on the platform. It was much quieter coming out of and re-entering the water and it rarely got stuck in the mud like the "saddled" fork that came standard on my push-pole back home. I was sold.

Loving the performance of the foot and more so the nostalgia of it all, I inquired as where I might acquire a guava fork. He told me to just send him a reminder email and he would ship me a couple from his stash. A couple of weeks later I received a package with a note that said- Everyone deserves a good fork. And sothe adventure began.

I dove into the project with all that I had making sure that I calculated and measured everything just right before removing one splinter from that precious piece of wood (guava trees are few and far between in Texas). Once I was satisfied that I had it all figured out, out came the saw and the wood rasps and I went to work. Sometime later I was poling the Texas flats with the real deal. Again, truly for me, it was all about the "this is how the Old Dudes did it" thing but I was more and more so becoming convinced that whoever came up with the idea of putting a "mud bar" on a push pole had done a serious injustice to such a pure thing as poling a skiff.

So, fast forward a few years and we arrive at a phone conversation that I had with Joe Welborn of Carbon Marine out of Florida. The phone rang, we exchanged a few pleasantries and he inquired as to what I was up to. I explained that I was shaping a new guava fork for my back-up push pole and how it was the only one I had left and I was hoping to not screw it up because my "source" was out of cured forks and it might be a year or so before any were available. "I've got a whole box of Stiffy forks in the back if you need one I can send it over," was his response. At this time I began to explain why that just would not do and how I wished I could design a fork that could be manufactured to replace the need for having a healthy population of guava trees in the backyard. "Why don't you?" He asked. "I'll help you with it."

So to the drawing board I went. Joe assisted in finding someone to do the CAD drawings and then cut our first mold out of tooling board on a CNC machine at his shop. We poured some prototype parts using polyurethane and put them to use. Needless to say, the first design was somewhat of a failure. Back to the drawing board we went to make it stronger. The second version exceeded my expectations so Joe proceeded to cut a set of aluminum molds on his CNC to be used in the injection-molding process. The problem was, his machine was not capable of cutting the aluminum blocks and he proceeded to break bit after bit. Finally he conceded that we were not going to be able to get the job done on his equipment so we went looking for a machine shop that could. Well, after several told us that they could not read the computer file in the way it was written, and others that could read it quoted outrageous prices, the dream was slowly dying. Enter fate!

One day I am out on the skiff guiding a sport by the name of Josh Norris. I was poling them around looking for reds when he commented on how different my push pole foot looked than others he had seen. The poor dude had no idea what he was getting himself into at that point as I started telling the story of my introduction to the guava fork and my failed attempt to bring a molded version to market.

"Well today happens to be your lucky day," Norris informed me. "I just happen to own a small machine shop called ARC Design with a CNC that will cut anything and I am quite certain I have the software that will read that file no matter what format it was saved in."

So here we are now, nearly two and half years later and one of my half-baked "fishy" ideas has finally reached fruition. With that being said, let me introduce you to the Skiff Gear Poling Fork. I cannot begin to tell how much heart, soul and aggravation went into seeing it to this point but I can tell you it was fun and has already sparked a few new ideas that I am working on now.Until next time be good, go slow. . . and stuff like that!