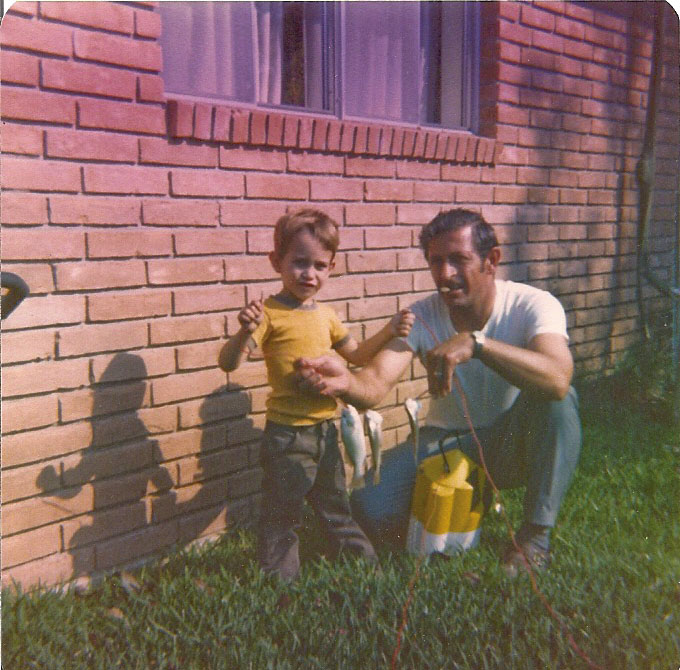 Looking back at my childhood, I realize how truly blessed I have been. You see, unlike the kiddos today, my friends and I had all the room and freedom to roam. In fact, except for Saturday morning cartoons and a program called Emergency, I do not remember watching much television. Our parents felt that it was safe for us to get on our bikes and disappear for the day and we were allowed to come back as dirty and skinned-up as we wanted. Since those days way back when, populations have grown almost exponentially and, with this boom in population, has come the need for more housing. And, the need for more housing means less wilderness and less wilderness means fewer fishing holes; in short, progress has taken its toll on the lives of children all over this county.

Happy to be the first to arrive because I would get first pick of the few open areas to cast from, I quickly rigged my rod. Now I do not exactly know how I remember this, but I do and am glad for it. That day, for some reason, I rigged this goofy yellow worm (a whole other story in itself) that I had in my pocket Texas style, but without a weight. On my first cast of the day, I tossed the worm out to a grass bed just offshore and started working it back just under the surface. When the worm was about halfway back, I saw a green flash in the clear water and reared back. The hookset provided me with a great show as the bass leaped several times flaring its bright red gills and shaking its head. Moments later I lipped the five pound bass and stared at the yellow worm wondering what the heck that fish thought it was.

Shortly thereafter my friends arrived and we fished until dark, but with no success. Incidentally, a few days later I went back with three more of those yellow worms to try to fool another bass. I was riding down the bike trail through the woods that lead to our little honey-hole only to notice that, the dark trail had an unrecognizable bright light at the end of the tunnel. I pulled my bike up next to my buddies and we watched in horror as a bull-dozer pushed dirt into our pond. Now someone's home is built on my fishing-hole.

That little bass pond, that was less than a mile from my childhood home, was the first of many fishing holes that I watched disappear in the name of progress. The next was a place called Shy Pond, although it was not filled in completely and remained decent for a short time after being developed. Originally, it was a wooded pond with dirt bike trails running to and from in many directions and it was a place where three to five pound bass were a dime a dozen and there were even quite a few that were on the plus side of seven. Back in those days, all that was needed to get a tug on the line was the ability to toss a white spinnerbait. Then one day the bull-dozers moved in and a year or two later, half of the pond was residential back yards and the other half was a city park. Like I said before, fishing remained good for a while. In fact, I had a friend, Bryan Hopkins, who if I remember right, pulled a thirteen pounder from there long after it was developed. However, like every other secret fishing hole that is shared with too many, the fishing declined and Shy Pond is now nothing more than a place to go feed bread to ducks.

I could of course go on and on with examples but I will get to the point. I recently saw data presented by the TPWD that shows, despite the drastic increase in the state's population, fishing license sales have remained relatively flat. How can that be? Well the reason is clear- kids do not go fishing anymore and they do not have the chance to fall in love with it. For one, there are fewer and fewer places for them to do so unsupervised as children. Two, it is not as safe anymore. Where I once had miles upon miles of backwoods to ride my bike through to get to my fishing holes, kids now days would have to cross numerous highly traveled roads and I have not even touched on the subject of the number of freaks out there that would do a child harm. Then there is the litigious factor. Although not as wild and wondrous as they once were, there are still places to fish. The problem lies in property owner's, whether private or corporate, fear of liability. A law-suit happy society is another downfall of what many like to call progress and has kept many children away from some great fishing holes and character building adventure.

I have said it many times, had it not been for fishing and hunting, I would have probably ended up in jail or, at the least, cost my parents a lot of money that they did not have keeping me out of jail. I personally like the fact that our bays are not more crowded but, I also recognize the fact that the sport I love so much has no future if the children of today do not learn to love it. We need to find a way to get children out fishing more and teach them to love and respect the resource. We need to do it for our sake and more importantly- theirs.Wishing you all the best. . . and stuff like that!