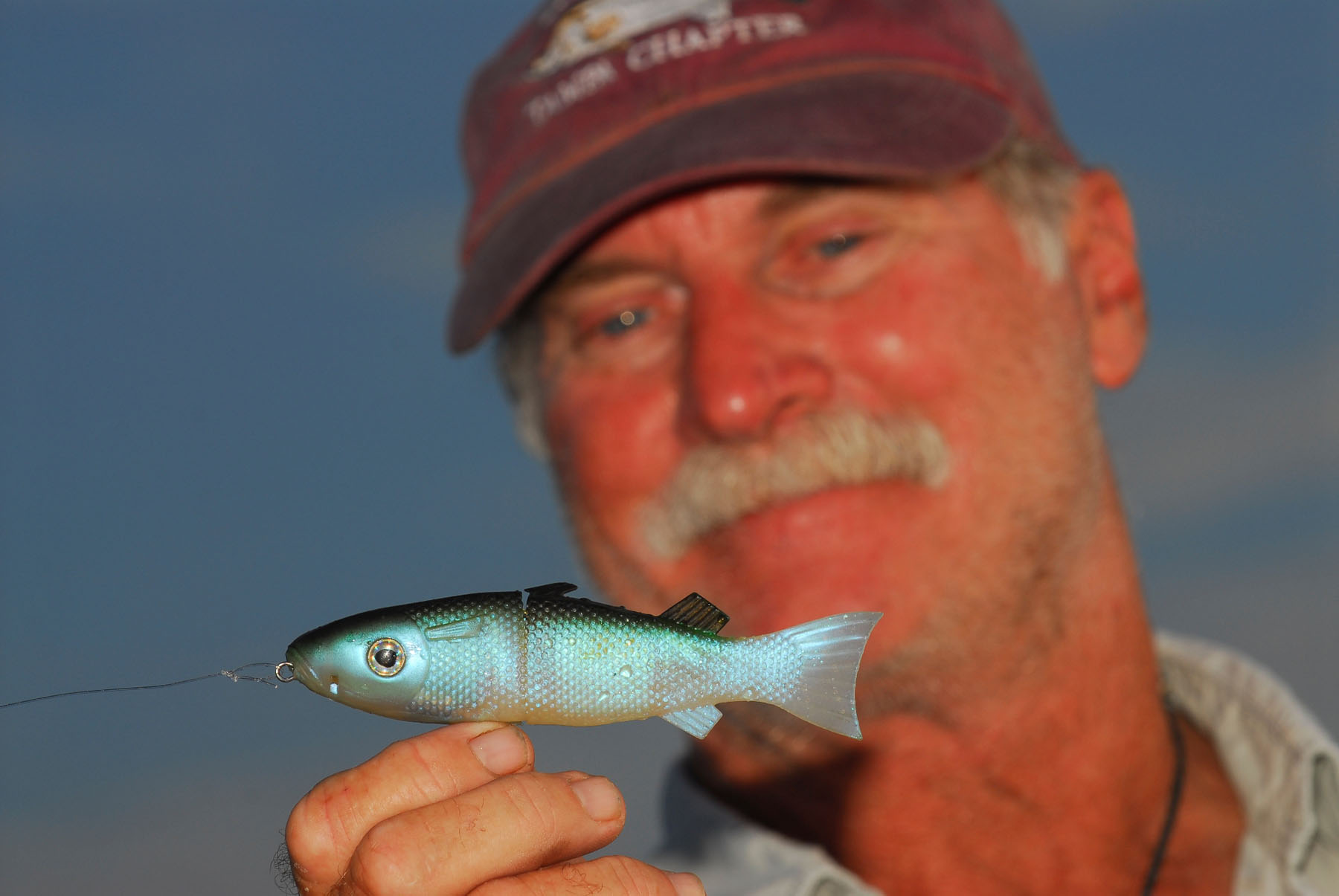 Mark Nichols, founder of D.O.A. Lures, & D.O.A.’s new BFL — Big Fish Lure.
I can still remember the day that I learned what that little lure could do. I was fishing with my good friend David Sams and, to say the least, things were a little slow. That is until David broke out this little piece of plastic that made me look and feel a total fool. The lure I speak of was the D.O.A. Shrimp.

Mind you, it was not the first time I had seen one. In fact, I had tried them on several occasions with little to no luck at all and had all but given up on them. That is until I watched my friend catch fish after fish on one while I churned the water, to no avail, with every lure in my box.

That day I learned that I had no idea whatsoever as to how to fish the bait and was briefly schooled on the proper technique. Since that day, the D.O.A. Shrimp has been a part of my light-tackle arsenal- fishing my home waters of Texas to the Florida Everglades and everywhere in-between.

What makes the D.O.A. Shrimp so special, other than the fact that it catches the heck out of fish, is its creator, Mark Nichols.

Years ago, David Sams introduced me to Mark at one of the many trade shows that many of us attend and needless to say, his knowledge and passion for coastal fishing made a lasting impression on me. So much so, that I hoped to one day have the opportunity to share a skiff and a day on the water with him. That opportunity recently came when E. J. asked if I would like represent TSF at a D.O.A sponsored outdoor writer's conference. I of course accepted and was delighted to learn that I would have the chance to spend a few hours fishing with Mark prior to my departure the final morning of the event.

The event was held in Stuart, FL where, of course, D.O.A. lures are conceived, created, tested and manufactured but, before I tell you about my trip, I think it is important to know a little more about the man who created the D.O.A. brand of lures that can be found in tackle boxes across the Gulf Coast.

Very few people know that Mark was once a Texan. Yep, you heard me right- Mark Nichols is from Texas and, believe or not, some of his many ideas came from his days as a youngster working on his father's shrimp boat in Galveston Bay.

"I used to study the different baits as they swam around in the tanks," Mark told me recently during a phone call."

Once he graduated from high school he moved off to Austin and the University of Texas where he got the bug for bass fishing with artificials and light spinning gear. It was not long before he took his newfound knowledge to the coast and applied what he learned to catching redfish and trout.

Now this is where the story gets interesting. When he left the university, he moved to Durango, Co and continued to pursue what had become his passion- fishing with artificial baits however, it was a woman, not the fish that eventually led him to Florida where he has remained since.

"Well, I followed a woman to Florida and discovered the fishery. . . I loved the waters and the diversity and decided to stay," he told me. "One minute you might catch an eight pound trout and the next you might be fighting a hundred pound tarpon. It doesn't get any better than that."

When asked how his lures came about, he told me that most of his lure designs came from his need to catch different species in different conditions. It was this necessity that helped spawn the ideas for all of the lures now marketed under the D.O.A name.

In 1988, Mark made the first D.O.A. shrimp and by 1989 he was in business. A business that has thrived, not only on innovation, but by credibility, in that, his lures go through extensive field testing (Mark fishes a lot) prior to being made available to those of us looking for the next 'latest and greatest' lure to toss to our favorite game fish.

Since its inception, the D.O.A. brand has become very popular with inshore anglers all over Florida however, here in Texas, it has been somewhat neglected. Why? I have no clue. I utilize several different D.O.A shrimp and baitfish designs with great success but know very few other anglers that will even consider using one. Although, those I have seen or convinced to try out the numerous baits now fill space in their tackle boxes with D.O.A. Shrimp, Bait Busters and Terror Eyz. But wait, there is new one out there called the BFL (big fish lure) and I am here to tell all of you big trout fishermen- I have seen this thing work and you would be crazy not to have a couple in the box.

Anyway, enough about all of that- I have got to tell you about my last morning in Stuart. So, we leave the dock early that morning and Mark informs me that he thinks we might be able to get bit by a tarpon at this one spot nearby. Well, I happen to like that idea so we set off across the Indian River and pull into a small creek where there just happens to be rolling tarpon from 10-50 lbs everywhere which, incidentally, is my idea of Heaven on Earth.

It takes a while but I finally managed to snag a nice 50 pounder. What was really cool about this fish is that I was fighting it on some serious light-tackle. In fact, I had no idea how light until Mark asked, "How do you like that new 5 lbs test Power Pro?"

The short version of this part of the story goes like this, I fought the fish for about 5 minute and the poon finally shook the hook on a good jump. Now on to the good part!

After a couple of hours of fishing, Mark and I had the chance to fish one last flat close to the dock before I had to get to the airport. As we idled in from the deep water, we could see tons of bait- a great sign however, there was no sign of feeding fish anywhere.

As we trolling motored along the shore I began to ask Mark about sight-casting and he informed me that the deeper water of the Stuart area didn't lend itself to much sight-fishing. No sooner did he finish that sentence, he had to take a step back and say, "Except for that snook right over there."

I looked up, I saw a big snook coming down the shore and my knees got a little weak. I do not to this day know how I kept my cool but I did. The little D.OA. Shrimp sailed though the air, landed about foot in front and passed the fish, and BAM! The race was on and - remember the 5 lbs test? The fight lasted a while but. . . I got her and she was a brute of nearly 20 lbs. My biggest yet!

After posing for a few pics, we decided to call it a morning but, what a morning it was. In fact, it was so great that I have to say thanks to E.J. for the opportunity and to Mark for, not only a great morning of fishing, but for some damn fine lures. Can't wait to see what he comes up with next.