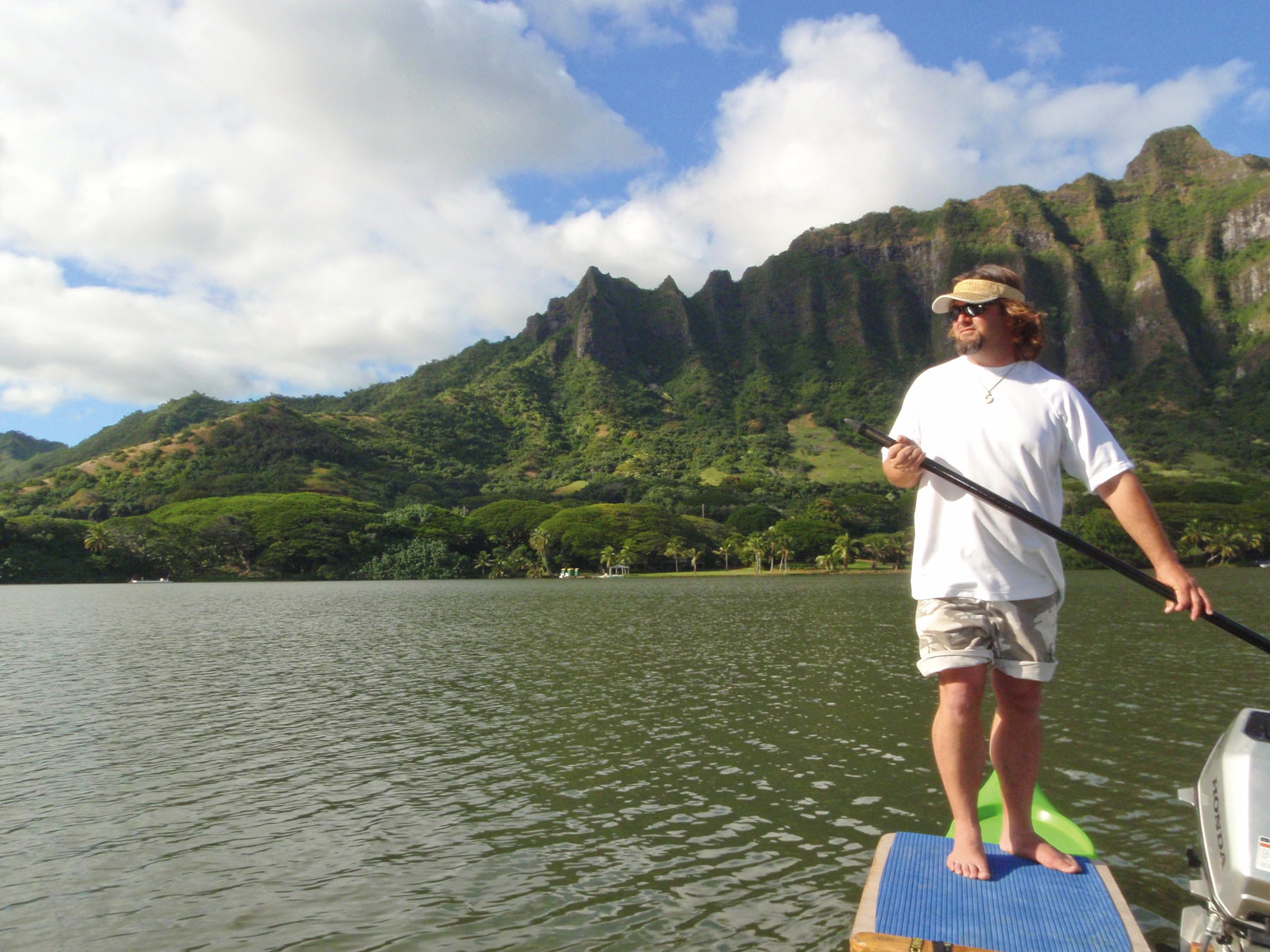 I cannot believe I am here again so soon, sitting down trying to think of something to share with you all. Of course it is 0300 hours and I am scheduled to be boarding a plane at 0800. In short, I do not have much time so what I am going to write about this month is the only thing on my brain right nowHawaii! And, if Hawaii does not sound exciting enough, I will spice up a bit by telling you about fly fishing in Hawaii.

For years now one of my best friends, Burt Moritz, has been living in Hawaii and he has been inviting me over to stay with him. Having always wanted to go, I just could never justify spending the money to go over and hang out on the beach. Well, eventually Burt found a way to get me interested. "You need to get over here so we can chase some bonefish."

At that point he had my attention and we began plotting. Needless to say it never happened because I just could not scrounge the funds. So Burt went and did something drastic- he decided to get married and told me that he really wanted me there. Not wanting to let him down I started saving and told him, "If I come over for the wedding, you have to find a couple of days to go fishing beforehand." He agreed and in January of last year I found myself fly fishing in Hawaii.

The day after my arrival, Burt and I were given access to so some private waters owned by a friend of his. These ponds are nothing more than coves of the island that were walled or bricked in by the natives hundreds of years ago. Weirs were built into the walls to control the tidal flow in and out of the ponds and to allow the tribesmen to trap fish. In short, the way I understood it, they were creating a fish farm to provide sustenance for their families. Now days, the ponds are used as recreation for a very lucky few and it is where I learned that an outrigger canoe makes a pretty darned good make-shift poling-skiff.

While fishing in these ponds we cast flies to a couple of very large bonefish. In addition, we had the opportunity to catch several good trevally. Now for those of you not familiar with the trevally, it is a fish that is highly coveted by the fly angler and people spend thousands of dollars to pursue them. Surprisingly though, there is nothing really that special about them in that they are actually nothing more than a jack crevalle colored a little differently. The exception to this is when you start talking about giant trevally. These fish grow to exceptional size (seventy to eighty pounds) and we saw some in these ponds that would go a minimum of fifty. Unfortunately though, we never hooked into a giant although we did manage to catch a couple of the lesser species in the fifteen to twenty pound range.

A few days later found us fishing with Hawaiian bonefish guide Terry "Coach" Duffington or Coach Duff as he is known. As I understand it, he was quite a popular and successful college football coach earlier in his life and the name has followed him.

Having the reputation as one of, if not the only reputable bonefish guides in Hawaii, Coach Duff proved over and over that day that he had game. His knowledge of the tides and where and when the bonefish would show amazed me. His knowledge was not the only thing he had going for him either. Somehow Coach has access to all of the military bases that are numerous on the island of Oahu. In fact, just moments before we stepped onto the flats where I hooked my first Hawaiian bonefish, we were driving through the hallowed grounds of Hickam Field, staring in awe at the bullet holes that remain in the buildings and pavement from Japanese machine gun fire on that dreadful December day in the year 1941.

After fishing the tide at Hickam, Coach asked us we had it in us to try one more spot. Moments later we were loaded up driving across the island to launch his panga for a short ride to an isolated flat. Upon arriving he grounded the boat, set the anchor and then, looking at his watch, announced that the fish should start showing within the next half hour. Sure enough, about twenty minutes later, we started to see small groups of bonefish weaving in and out of the mangroves.

Fishing these bones can only be described as "combat" fly fishing. Once hooked they would take off through the shoots of mangroves and you had to be quick to react, sometimes even running after them trying to get the angle that would allow your fly line to find its way through without breaking the fish off. Very intense! But the best part of the whole thing was, just as the sun was going down, Burt hooked and landed his first bonefish evera nice six pounder. None of us could have been happier with the day and at that point I knew that I would have to return sooner than later.

So here am now, at 0400, getting ready to leave for the airport, doing all that I can to stay awake knowing that in less than 24 hours, I will be sitting on the beach in my buddy's back yard, listening to the sound of the Pacific while rigging tackle for my next Hawaiian bonefish adventure.