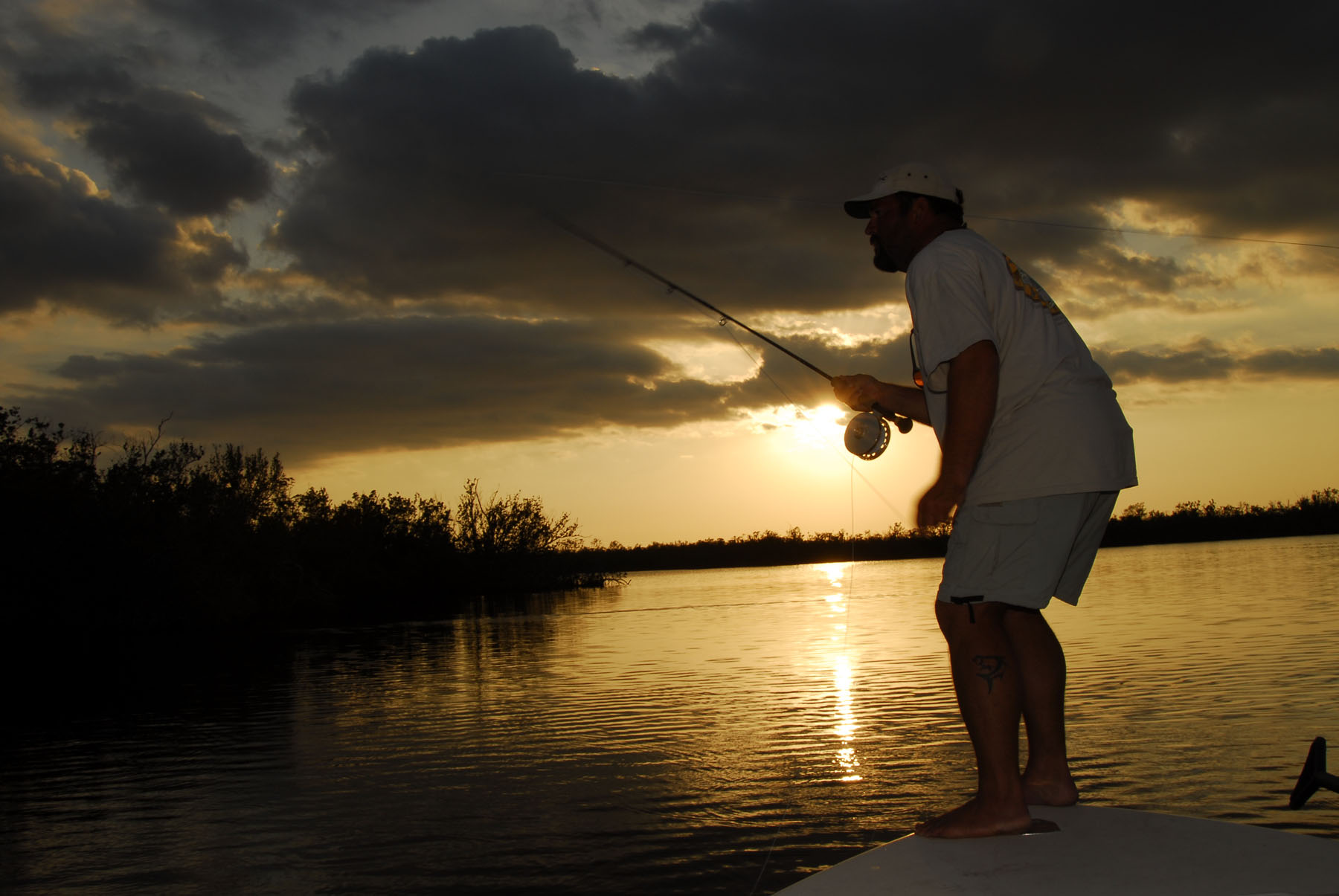 How does a person show devotion and dedication to someone or something? Well actually, the ways are infinite. For example, in the country western song "John Deere Green" by Joe Diffie, "Billy Bob loves Charlene" was written on a water tower in, of course, John Deere green enamel for all to see. Another example of this kind of dedication would be the casting of a compass rose that I wear around my neck that is a symbol of love and friendship between me and a special person in my life. There are other, albeit more permanent ways of showing the utmost of admiration. For an example, all a person has to do is walk up behind me at the boat ramp and they will see a tattoo of a tarpon on my left calf.

My obsession with tarpon started back in my Coast Guard days when I was temporarily assigned to Coast Guard Station Key West. Every evening when I would get off duty, I would stand on the old Navy pier or at the sea-plane ramp behind the base and cast flies to rolling tarpon. It took me a while to figure out how to fish a fly in the heavy current, but once I did and that fly line came tight for the very first time and 60 lbs of silver rocketed out of the water, sending what seemed like gallons of water into the sky- I was hooked.

Let me give you an example of how bad I have got the fever. I am sitting in a dormitory over my friends dive shop in Key Largo (Florida), it is after midnight and I have not slept in over thirty-six hours. I just now finished going through all of my tackle. I rigged new leaders, cleaned fly-lines, greased reel drags and sharpened hooks all in preparation for tomorrow's excursion in the back-country of the Everglades in search of, yep, you guessed it, tarpon. I mean let us face it folks- I am ate up with the dumb-butt about these fish.

Anyway, since that day so long ago, I have devoted as much of my free time and even some of my professional time to chasing the silver king. To date, I have caught quite a few tarpon, most of which have weighed less than 40 pounds. In fact, I cannot begin to count how many days I spent fishing and hoping to get a 'big' poon to eat the fly and then successfully fight and land it. This quest for a triple-digit tarpon, incidentally, is what led me to get a tarpon tattoo.

I had spent hundreds and hundreds of hours chasing a 100 pound plus tarpon and come up empty handed more times than I care to admit. I needed some luck so I said to myself, "Why not pay some respect to those damned old fish and maybe, just maybe, I will be rewarded?" I was off to the tattoo parlor.

The next spring, I arrived at my buddy's house after a non-stop 20 hour drive sporting my new ink and, within an hour of arriving in his driveway, I was hooked up solid to my biggest tarpon to date. Twenty minutes later my friend had both hands firmly latched to my trophy's jaw. He then freed one hand and tried to pull a scale from my prize and before he knew it the fish pulled free of his grasp and with a powerful swipe of its tail, managed to soak us both. It had worked!

I certainly realized that I was not the first to do it. Heck, several of my friends had been sporting redfish tats for quite some time prior to me paying homage to my favorite fish. However, over the years, more and more anglers have been showing their love for fishing by getting tattoos. In fact, I can honestly say that I have seen some pretty spectacular skin ink renditions of battling billfish that would rival any Guy Harvey painting. Really- there is some great fish art out there walking around.

Anyway, I for one am not suggesting that any of you go out and get a tattoo. In fact, it is very important to recognize that there are inherent health risks involved. But, I will offer you this. If you love something or someone so much that it makes you stupid- let the world know and chances are that you will be rewarded. Best to you all!