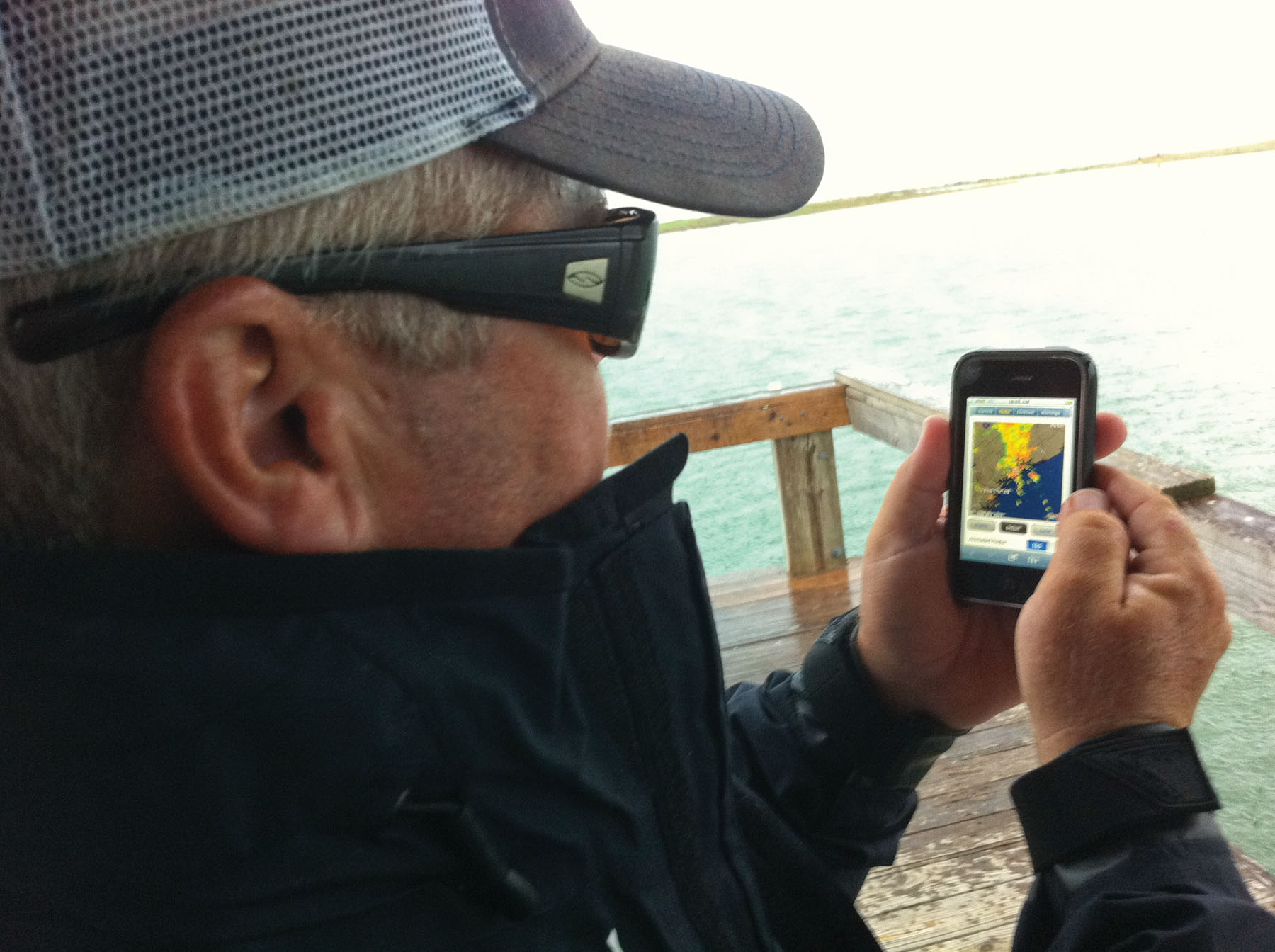 We should have never let it into the woods or onto the water! What? Technology- that is what.

But wait, didn't my customers and I just escape a violent thunderstorm a couple of weeks ago because I had satellite weather on my phone? I am so confused. Anyway, good or bad, technology is here to stay. The trick is to avoid relying on it in ways where a backfire can ruin your day.

A couple of weeks back I am sitting in a tripod that I have standing up inside the branches of a fallen oak tree overlooking a heavily used game trail. Over the last couple of years I have seen numerous deer using this trail and with the wind blowing the direction that it was that day, it was the perfect spot to ambush an unsuspecting buck.

Now, to put things in perspective, because I think that we should try to minimize our technological edge over the wild things of the world, I choose to hunt with a long bow or recurve rather than a compound bow. Having taken game in the past with a compound, I found it too easy to generate the thrill I'm seeking. So I made the switch and, in turn, have become a better hunter. Where I could previously take shots effectively out to 30-40 yards, I am now limited to about 15 yards, preferably 5-10 yards. The difference is this- a compound shoots with greater velocity and be fitted with sights where traditional gear has neither.

So, I am sitting in a tree with my long bow and wooden arrows overlooking a highly-suspect game trail (notice there is no feeder mentioned here) and everything is perfect in my "technologically free" outdoor experience. And, then I hear some twigs cracking. Sure enough, here came six does walking the trail toward me from the woods. Not interested in the does I kept a vigil eye out for what I hoped would be a buck following and sure enough here came a nice eight point. The moment of truth was upon me- all of these deer were going to walk, single-file, within a few yards of my stand on the trail beneath me. All I had to do is maintain my cool long enough to allow the does to pass without them detecting me and then the buck, which was preoccupied by the girlies ahead, would walk right into the little opening that I had trimmed into the trees.

One doe, two doe, etc. passed until the last one was underneath and I started to draw tension on the string and point the arrow in the direction of the opening. The moment of truth was upon me and the head that was supporting that nice rack passed into the opening. At this point I am aiming and starting to draw… come on, just two more steps and then… the sound of Van Halen's Panama rings out through the woods drowning out the sound of my pounding heart. I had forgotten to turn off my damn phone!

I was instantly in tears from laughing so hard. Apparently white-tailed deer do not have the same appreciation for the musical genius of Edward Van Halen. Now to add insult to my bruised pride, the call I received at 7:30 that morning was from none other than our illustrious editor- E.J. Once I gained my composure, I called him back and we got a good laugh out of it.

Anyway, that is my most recent horror story of how technology invaded and ruined a great outdoor experience for me but I can assure you there are people who experienced much worse. Case in point would be the guy that waved me down early one morning. When I saw him, I had to do a double-take because to the best of my memory there were some large pilings in the vicinity that showed only on low tide. It turns out that he found them the hard way. "I was following my GPS and it showed nothing but open water here," he told me as I idled alongside.

"How long have you been here?"

"Since just before dark yesterday evening," he responded while he and the others in the boat scratched at mosquito bites too numerous to imagine. "We tried calling for help but my cell does not work very well down here. Do you have a phone I could borrow?"

Let me tell you folks, it could have been so much worse for these people if the tide had been a bit lower and those posts had been sticking up just a few more inches. Which brings me to the point- do not rely on GPS, Google Maps or even a NOAA or USGS chart for navigational purposes. Use them as aids and references only. I routinely see people flying across the bay doing 50 mph staring at their GPS screen and paying no attention whatsoever to what is, or might be in front of them. Remember, you are on the water and things float in the water and are constantly being moved around by tide and wind. This doesn't even take into account that you could run into another boat. What was not there yesterday might be there today.

I personally do not approve of GPS, Google Earth, or any other such device or program being used for navigation.

I think everyone should learn it the way I did- spending time on the bays to learn your way around, slowing down during times of limited visibility, and always using a powerful handheld spotlight when running in the dark. But, unfortunately that is not the way of the world and, I would be a liar to not admit to you that sitting on my desk in front of me is a GPS and several aerial photos that I have taken from an airplane while exploring places that I have not yet fished. The difference is I do not rely on them to get me to and from the fishing grounds and, when I reach the shallows I stop and begin poling with my good old-fashion, technologically superior, graphite composite Stiffy push pole. What a hypocrite, huh?

Certainly I would never encourage anyone to give up their graphite rods, reels with umpteen ball-bearings or Gore-Tex rainwear- I certainly will not be giving up mine. However, I will tell you that you that relying on technology dumbs down the senses and promotes a complacency that takes away from the wonderful experience that is the Texas Outdoors.