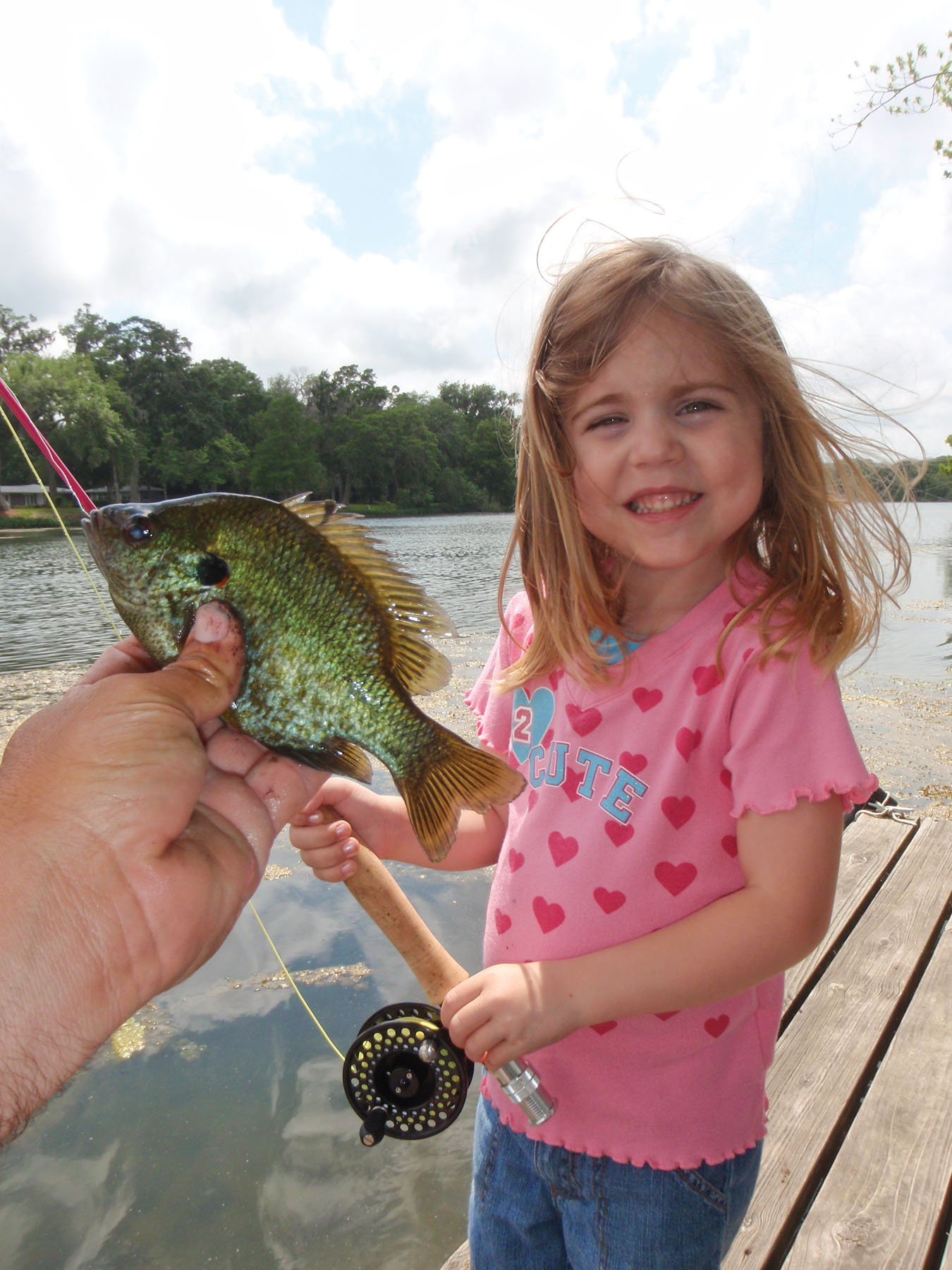 While it is unlikely that I will ever have children, I still think it is important to teach children to love and respect the resource. Here is my niece, Kayden, with her first fly rod and one of the first fish she ever caught. She obviously needed some help with the casting but... she released it all by herself!

It has been said a many a time that there are a million different ways to say it. And, it is a simple concept to grasp and that is- the children are the future. They are the future voters, leaders, lawyers, doctors, teachers, parents, and … yes, even fishermen, of this great nation. That is why it is imperative to not only to teach them to love fishing but also to teach them to be stewards of our precious natural resources.

Not too long ago I was poling some sports on the flats and, as so often happens these days, along came a boat with an elevated console running ten feet off of the bank we were fishing. The driver was standing on the console steering with his toes. The boat was following the contour of the bank very closely as he dipped in and out of every cove. As usual, my blood boiled, so I turned my skiff away from the bank and started poling for deeper water so I could jump up and go in search of greener pastures. The operator saw me leaving so he continued on doing his thing. It was nothing new… it was just some inconsiderate boater with no regard for others or for the potential habitat destruction that he was doing but then I noticed, this guy had a little boy standing on the console with him and was pointing at all of the fish that they were spooking from the bank. Now I really was fuming!

Not only was this guy being rude and showing no respect whatsoever for the resource- he was teaching his son to do it. Even worse, he was operating his vessel in an unsafe manner with a child on board. What would have happened if he had hit an underwater obstruction or run aground? Well it is quite possible that the child, who was considerably shorter than the "burn bar" and probably unable to hold on during a sudden stop, would have gone flying and who knows what after that. I shudder to even think of it.

Consider this folks. There are already too many people on the bay who have no regard whatsoever for others and could give a rat's ass about the resource. As long as they get their picture snapped with a pile of dead fish, they are content. Is this really what we want to teach our future anglers?

People, it is imperative that when we introduce children to this sport we do it responsibly. We should first teach them to love the sport of catching a fish and stewardship of the resource. They should be taught to appreciate not only the catch, but the fight and the fair chase of one of God's wild creatures. Just as important, we need to teach them to be safe and courteous on the water. If we fail to do so the future of the sport of fishing is very grim.

I have been a guide now for much longer than I care to admit, and I am ashamed to admit that I have not taken nearly enough kiddos fishing over the years. For one, I have none of my own and secondly, the way I choose to fish is not very conducive to taking kids fishing although I have, on occasion had the opportunity to introduce a couple of youngsters to the sport as I know, practice and love it. I have had the pleasure of watching those young individuals go from having dad cast to and hook the fish for them and then hand them the rod to fight the fish all the way to standing up on a bow platform and casting to single redfish crawling the bank with backs out of the water, hooking it and landing it all by themselves. Talk about a rewarding experience for someone like me.

Now before I go on to conclude this piece, I think it is important to mention my opinion in regards to keeping and killing fish in regards to taking children fishing. As so many know- I am a hard-nosed S.O.B. when it comes to catch and release. I have no objection to keeping a fish or two for a meal that night or the next but I take a firm stand against meat hauls. When it comes to taking the youngsters fishing, I think it is important to teach and instill the conservation ethic first and foremost, however, I do also believe it is important for children to also appreciate the fine bounty that bays provide us so… I feel it would be wrong to deny them the experience of providing the occasional meal for their family.

Surprisingly, after spending the time writing this piece, I have come to the realization that I need to do more to introduce children to the sport. And, I am going to make it a priority to do so, if for no other reason than it is a very rewarding experience to watch the smile on a child's face when they feel the tug on the line. But, at the same time, I will bring this full circle and remind you all… if we do not teach the future "adults" of this State to appreciate and love the sport, there will not be anything left for us to enjoy as we grow older.