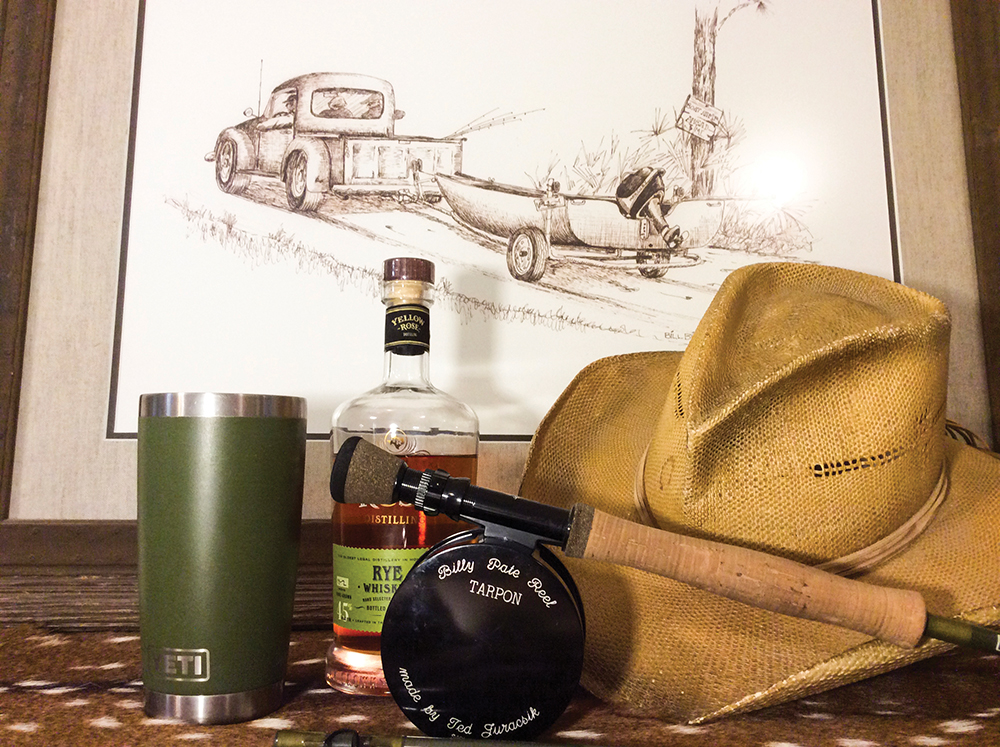 It’s really funny, looking back at it all. When I started guiding full-time, I did it as a lifestyle choice, not as a career. Then I started taking pictures and writing articles for various publications to help compliment that lifestyle. Little did I know it would bring me to this point in my life.

Hell, what makes it even more interesting is that on the day of this writing fifteen years ago, I met the girl that was the reason for me accepting this gig, back when this publication was still called Gulf Coast Connections. I wanted to marry her so badly I couldn’t see straight. More importantly, I wanted to prove to her that I was more than just a fly-fishing bum. Incidentally, I lost her a few years later but I have kept on being me. Anyway….

Back this spring, I was just across the street from my place in Everglades City visiting with a friend. This friend happens to be considered the “greatest fishing guide who ever lived” by a great many people I believe qualified to bestow such an honor. Numerous articles have been written about him through several decades, referring to him as the “greatest fishing guide ever.” The man I speak of is the legendary Steve Huff.

While talking with Steve, his son Chad, and my good friend Wright Taylor (we are all guides), I learned that Steve was planning on retiring in October of this year after an incredible 50 years of guiding. You heard right! Mr. Huff started guiding in 1968 in the Florida Keys and now is retiring in Everglades City. Wow, and I was feeling proud about starting my twenty-third year of full-time guiding on the month of the year that he has decided to retire.

Now after spending quite a few days of hanging out with him this season, in and around the ultimate man cave that he built for himself – talking with, and getting to know, him better – I can assure you that he will keep working, just not at the pace he has been all these years.

So let’s go back quite a few issues of this magazine when I mentioned that I was writing a book. Without going into too much detail about the book I will say one of the biggest parts of the book will include interviews with many of the best guides in country. I had not, but have always wanted to interview Mr. Huff. So, one day we did it. I set up my recording equipment and we sat down for an hour-long interview. It was one of the most insightful hours of my life.

To say the least…this interview changed my perspective, not only on my career, but also on life, especially in regards to my outlook on my health and family.

Years ago, I think I made a joke in one of my “According to Scott” articles about “working hard on my first cardiac event.” Had something to do with chicken-fried steaks at Barkett’s Restaurant in Seadrift (if I could throw in a teary-eyed emoji here, I would). Well, my first cardiac event happened this spring at the age of 47.

Nothing terribly major but, regardless, it landed me in a hospital bed for a short stretch. After that, I was told by the doctor to make some lifestyle changes. Mainly, do less of this, this and that and, most importantly, reduce my stress levels.

Now, after relating the doctor’s advice to the most important person in my life, she requested that I make some major changes as well.

So, believe it or not, I have found after fourteen-plus years (more than 160 articles for this publication alone), one of the most stressful parts of my life is the last 4-5 days of each month trying to come up with something fresh and interesting to share with you all. I think (hope) that I have at least a .500 batting average.

I promise that I have tried but I no longer feel like I am doing a good job and it is time to say goodbye to TSFMag. I will dedicate all my efforts and energies to simply being a better fishing guide. I think it what is best for me and for those that I love.

I am hoping that in the years to come our editor will allow me to make a guest appearance from time to time but, for now, I need to concentrate on those that I love and on being a better guide.

Thank you all for giving me the opportunity to share my ramblings with you. I hope you have enjoyed it. I raise my glass to you all.