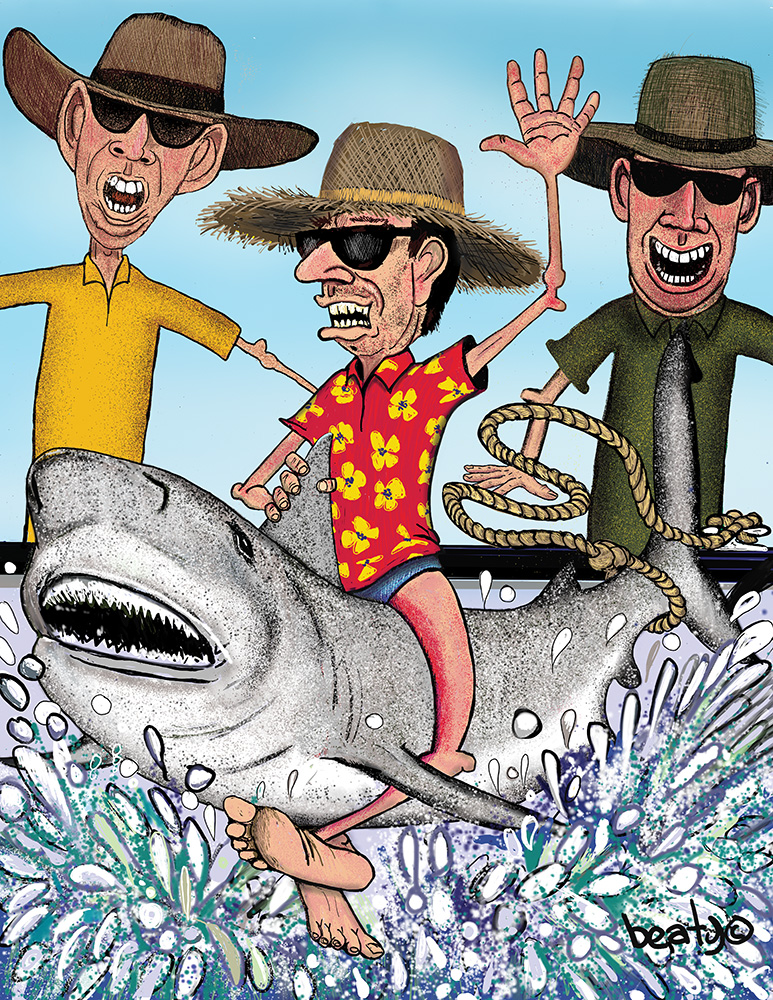 On the boat every now and then, the catching slows down and the conversation turns to catches of past. Many such conversations begin with questions that cover a wide range of topics. What is the biggest fish you’ve caught? What is your favorite fish to catch and eat? What is the craziest thing that happened on a charter?

These are all fair questions and excellent conversation topics to help pass the time. These questions are especially fitting for this month’s article as we are now in what I call the off-season lull. Interests trend toward hunting more than fishing this time and my charter schedule slows accordingly. So, with little fishing taking place, I thought maybe we could dig into some of the common topics that get hashed and rehashed on the boat.

For me it isn’t always the biggest catches that are the most memorable. Certain circumstances dictate whether a catch might qualify as more memorable, maybe the first of a species or possibly a particular bite. I’ll start off with listing a combination of fish sizes and special fishing circumstances or accomplishments. My top five favorite “invite them to dinner” species…sans the tarpon, of course. I absolutely love chasing tarpon but this a total catch and release fishery.

Sheepshead fall into a category all of their own. Tricky to catch and being difficult to clean keeps these fish plentiful. Sheepshead are a cold weather fish of sorts, though they are available year ‘round. Our season, if you will, runs November through April with the peak of catching coming from mid-February through March. I once had a customer catch a 13-pounder while mid-summer tripletail fishing. I was very excited for his huge catch considering his S.T.A.R. tournament winning possibility. Luck would have it that he forgot to enter that year. Spot of bad luck for sure!

Tripletail are a unique species to fish for and also very tasty on the dinner plate. Due to increased popularity in the last few years they are becoming less common in Matagorda Bay. I don’t fish for them as often as I once did but still enjoy the chase on a calm day. Live shrimp seems to be their favorite meal. We release the large ones for stock replenishment and keep the 20-inchers. Displaying a great affinity for structure, tripletail are also very strong fighters. Pound for pound they could easily rate as one of the toughest we encounter in the bays.

Cobia or Ling I consider one of the most highly-prized catches. Angling for them can be quite a challenge or stupid easy. Sometimes they are on the surface, tight to structure, or maybe unseen while holding on the bottom. Somedays they will eat anything and others they will ignore it all. The only bait I’ve never had them pass on is a fresh eel.

Speckled trout garner a level of respect like no other inshore species on the Texas coast. Many anglers believe themselves (or others) unworthy unless and until they attain the “dirty-thirty” club. Personally I’ve never hit that mark; measured in a scant half-inch shy a couple of times. Getting in that club doesn’t concern me much anymore. Releasing a 28-incher occasionally in my home waters is good enough for me.

Redfish, like trout, have a huge following. Good fighting, decent on the plate and available in good quantities – what more could you want? I’ve seen them in many sizes but the true jumbos are the least common. A dozen or so years ago I had a “one time fun time” customer catch one that was stout. She stretched 52 inches, looked like it had swallowed a basketball and was thick all the way to the tail. After a round of high-fives a quick measurement and photo, she was released no worse for wear. Afterward the fisherman declared that he wanted to catch a really big one someday. “One worth bragging about.”

Tarpon are known far and wide as the ultimate gamefish. They start showing on the Texas mid-coast in May and frequent our waters into November. I’ve been present with several catches in the 200-pound range but the smaller ones are my favorite. My fondest personal catch was a 48-incher sight-casted with a topwater lure using 6lb mono line.

Day in and day out I would have to say my favorite fish to catch is the one on my customer’s line.

The more time you spend on the water the greater the possibility of witnessing incredible happenstance. Add to your sea time a mixed bag of interesting and even unusual companions and just about anything might happen.

By and far, the wildest and most ignorant incident that occurred on my boat involved a crazed redneck wearing cutoffs ala Daisy Duke, a 9mm autoloader handgun and a bull shark. Years back I had a regular client who booked lots of charters, I’ll call him Gary. There was never a dull moment with this guy. He’d showed up to the dock with a different party each time to join him for what he liked to call “inshore big game” charters.

Gary’s partners in crime for the day this incident occurred were interested in catching a sizeable shark. Story goes that the proprietor of their hometown watering hole, upon learning of their upcoming fishing trip, put forth a crazy offer in the form of a dare. He would have the shark’s head mounted by a taxidermist and hang it above the bar for all to see, but there was a caveat. The illustrious Mr. Duke would have to ride it. There was some talk of Mr. Duke riding a shark throughout the day but I didn‘t put much stock in it. Who would do such a thing?

We fished long and hard for that one big bite that finally came at day’s end. The 7-footer put up a good fight all the way to the boat. I tail roped it and lashed it off to the gunnel so I could clear the deck for the catch to come aboard. As soon as I turned my back I heard POP-POP! Little did I know Mr. Duke was packing a pistol in the pocket of his incredibly short cutoffs.

Lots of hollering and high fives ensued soon after said shots were fired. Thinking the worst was over I resumed readying the deck and getting cutlery laid out for processing. A moment later I heard a splash and turned to see this guy wearing only Daisy Dukes and a straw hat in the water crawling onto the back of the bull shark. For the landlubber that he was this evidently sounded like a good idea. Never mind the fact that the likelihood of one of the 9mm slugs mortally wounding the shark was quite remote.

Well the shark was far from dead, mildly stunned at best. All hell broke loose once Mr. Duke latched on to the dorsal and wrapped his thighs around the shark’s midsection. Mr. Bull Shark wanted no part of whatever was strapped on his back.

Lots of thrashing ensued while the whole time his shipmates loosened the tail rope for a proper buck-off. Mr. Duke held on for his life trying to keep away from the business end. His intended 8-second ride turned in to a couple of minutes and his injuries showed it. Inner thigh to kneecaps were a bloody mess and he was in a great deal of pain.

This sounds like a hold my beer story but there was no alcohol onboard that day. No seriously threatening injuries other than enormous humiliation. I hope for Mr. Duke’s sake that the shark head is mounted above the bar for all to see. You just can‘t make stuff like this up.