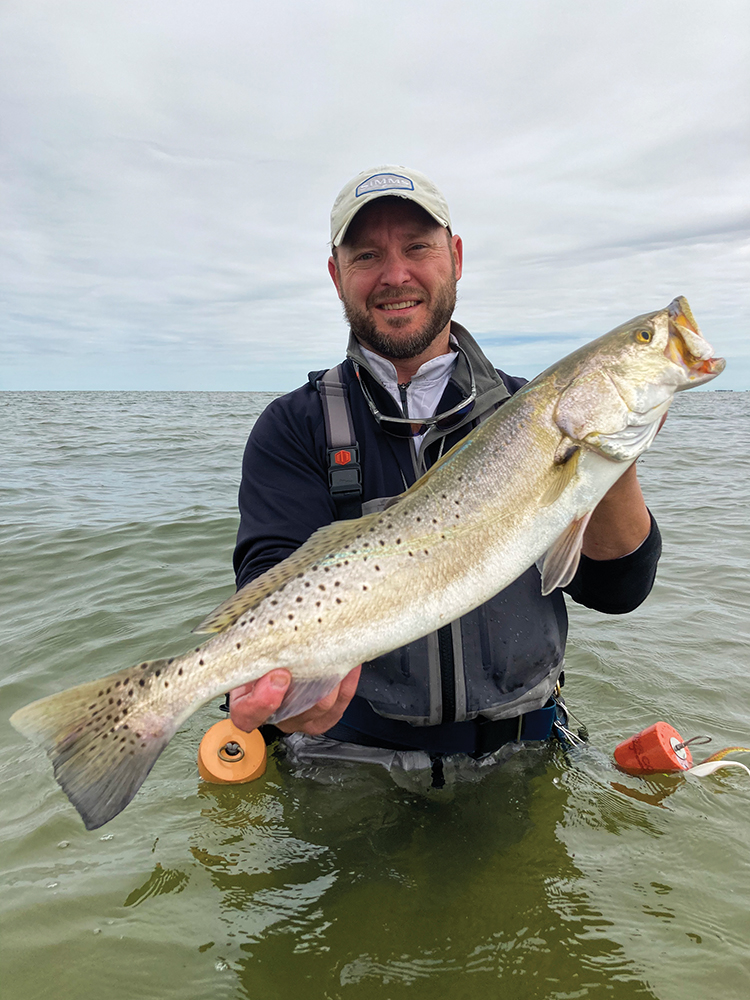 I finished my last job for the day near Ocean Drive at about 3:30 pm. The weather was abnormally beautiful for early September. There was an unusual northeast breeze and the clouds had been building all day. On the radio, the weatherman kept repeating that sporadic showers were scattered about. The only thing on my mind was the almost flat seas of Corpus Christi Bay. The fish bug was nibbling on my ear and by the time I got home she had taken a huge bite.

I quickly backed my truck up to the boat and had her hitched in no time. A quick change of clothes, grab my wading belt, favorite casting rig, a quick pet to my dogs, and I was gone. My home is only three streets from nearest boat ramp, and from that point it is about a thirty-minute boat ride to the mouth of Baffin Bay. I would not normally travel this far for a quick after-work trip but something was in the air. I couldn’t really describe it, and I figured what the hell. Want to catch a big one? Go where the big ones live!

I quickly dropped the boat in the water, parked the truck, and idled my way out to the bay. In no time I was southbound, cutting across the crystal clear waters of the Laguna Madre. I would not see another boat the rest of the day (try that today). Flying by spoil islands and submerged sandbars, I passed up no less than two dozen ideal fishing holes on my way to Baffin, but I had a plan, and difficult as it was, I was going to stick to it.

At last, I pulled into my closest honey hole at the mouth of the bay, quietly put out my anchor and let the now moderate east wind set it for me. (Remember this was 20 years ago, before I began guiding and before Power-Poles.) I quickly got my equipment strapped on, grabbed my rod, and eased off the edge of the boat into a sandy little pothole that was as firm as a city street. The first thing I realized was that I had the wrong lure tied to the end of my line so, with a couple of quick snips and a classic loop knot, I reared back and released the fury of a bone Super Spook – complete with new factory-sharp Cone Cut VMC hooks. In other words, some real mean and intimidating hardware.

It was exactly the fourth cast that the first eruption happened, but it proved to be all water and no lips. A few moments later I slipped around the tip of the small island and found some mullet acting much too nervous for such a pretty day. As graceful as momma cooking etouffee, I launched the big lure just ahead of a line of mullet and began fishing it parallel to the bait. As I reached the end of the line I began thinking, “Damn, there should have been a fish trailing behind all of that.”

While in the middle of that thought I nudged the rod tip once, twice, pause, once more, and SUHHH-WOOSH! She was on and I immediately knew she was good. The drag was singing and I thought, “Oh damn, a big redfish.”

About that time a large silver/gray head, full of yellow mouth and quarter-sized eyeballs came out of the water and began shaking at me. “Oh my little son, hold on…Daddy’s got a good one.”

The drag was too light and I immediately started reaching for it, we had to have some adjustment, but not too much, this girl meant business. She was a real tail walker and it was all I could do to keep her head down.

I practically had my whole rod, up to the reel, under the water, and was biting my tongue for good measure. I could see that she had already shaken one of the hooks that had originally stuck her.

After a few tense moments I worked her closer and she seemed to become more docile.  In about that same instant she whipped her tail with such force that she almost ripped the rod out of my hands and showered me with enough water to make it look as if I had fallen off of the boat.

With the enthusiasm of a baby dolphin she began the ferocious battle again, only this time I could not see her through my soaked glasses. Saltwater had gotten into my eyes and they were beginning to feel like they were on fire. Finally, when the moment felt right, I braved the nerve to fight her with one hand, while I removed the glasses and squeezed my eyes with thumb and forefinger. The battle continued for a few brief moments and she laid over on her side.

Easing her toward my belly, I reached for my Boga Grip only to find that in my haste I’d left it on the boat…DAMN IT, DAVID! Knowing that I was not going to keep the fish, I figured that it is no big deal if she shook loose at that point; however, I wanted to get an accurate weight before she was set loose.

Almost instantly I decided to reach down and land her barehanded. This should not be a big deal as I land the majority of my fish this way. So, as she passed by, I went for the first reach and she didn’t like it, not even a little bit. She started with the flailing and splashing again and I quickly jerked my hand from the sharp teeth and flashing hooks. Ooh wee…that was a close one!” I reconsidered the situation and decided to lip her on the side of the mouth, opposite the majority of the hooks. I’ve done it a hundred times. No problem!

Pulling her around for another pass, the technique worked perfectly. She gave another shake and we both now realized that I had total control of the situation. It was at this moment that the pain started shooting through my hand and I realized that I was hooked to the fish.

This is the point where my memory gets a little foggy, but to the best of my recollection I actually kind of giggled at my plight. Such humorous thoughts were shattered when she began shaking again. Now, brother, this was serious business, and this once happy fisherman was in extraordinary pain.

As best I could, I looked over the situation and quickly realized that it would be quicker for me to remove the hooks from the trout versus my hand. With great reservation I dropped my  $150 Curado and my $300 G. Loomis rod into the high salinity waters of the Laguna Madre. I think that may have hurt more than my hand, but I didn’t have a choice. I needed both hands to try and free the fish from my body.

As I took a couple of deep breaths to prepare myself for the removal of the hooks, my mind began to flash back to the high grass in my yard, and the trim that I should have hung around the new French doors. It was then that she began to move again and I instinctively tried to pull her close to me so that she would not put any more pressure on the hook that was buried in my hand. I finally had to press her against my chest to keep her from moving, and when she stopped I knew I would have hell to pay.

Now picture this, I am dripping with saltwater from head to toe, I have what appears to be a 29- to 30-inch trout hooked to the back of my hand, I’m bleeding like someone took a switchblade to me, and I now have all the free hooks on my Super Spook tangled into my brand new, “quick dry” fishing shirt. Mother of God, this sow is a freak and I want no more of it.

Reassessing the situation yet again it took about a split second to decide that my best option was on the beach with this fish. I quickly dashed that way, dragging $450 worth of gear behind me in the mud and saltwater. Upon arriving I immediately dropped myself and the trout down into the mud, and grabbed for my hemostats. Thank God they were where they were supposed to be.

To the passerby this probably looked like some kind of strange fetish taking place on the beach, as I am humped over my hand, which is still connected to the fish, and I am having to straddle both. All my options were running thin so, in one semi-slick move, I managed to get my shirt pulled over my head, and at last I could sit up straight. I located the only hook still connected to the big trout and with surgical precision quickly popped it out of her mouth. In the words of the Reverend Martin Luther King, I said, We’re free at last!”

The big girl just didn’t look like she had much left in her, but before I began removing the hooks from my shirt and hand I slipped to the edge of the water to release her. At first she almost appeared dead, but she quickly got the oxygen flowing again and, with a final goodbye slapped her tail and drenched me with salty spray. As if to say, “I WON!”